Interactive Discussion and Book-signing of his new book

How to Teach Your Children Shakespeare

at the Folger Theatre on June 8 at 12pm

World-renowned playwright and Tony Award® nominee Ken Ludwig (Crazy for You, Lend Me a Tenor) will be hosting an interactive discussion on Shakespeare’s Twelfth Night, followed by a book-signing of his new book How to Teach Your Children Shakespeare at the Folger Shakespeare Library on Saturday, June 8 at 12pm. The event is free and open to the public; reservations are recommended and can be made by visiting www.folger.edu/theatre or by calling the Box Office at 202.544.7077. The talk is presented in association with Folger Theatre’s production of Twelfth Night, playing through June 9. A 2:00pm matinee performance will follow the event.

How to Teach Your Children Shakespeare (Crown Publishers: on sale June 11, 2013) details an enormously fun method to help children memorize passages from Shakespeare’s plays while learning a world of information about the Bard’s life and works

You don’t need to be a Shakespeare scholar to reap the benefits of great literature for your children. Ludwig found that a foundational understanding of Shakespeare is a leg up for any child, giving them a head start in reading comprehension, public speaking, literary history, and overall academic confidence. In How to Teach Your Children Shakespeare, Ludwig provides the tools to instill children with a lifelong love and understanding of Shakespeare’s works, without overwhelming them. His method combines read-aloud, repetition, and rhyming techniques together with vivid descriptions of the plays and characters to introduce kids to Shakespeare’s world.

KEN LUDWIG is an internationally acclaimed playwright who has had numerous hits on Broadway, in London’s West End, and throughout the world. He has won two Laurence Olivier Awards, received three Tony Award nominations, and won two Helen Hayes Awards and the Edgar Award. His work has been commissioned by the Royal Shakespeare Company and has been performed in more than thirty countries in over twenty languages. Some of his Broadway and West End shows include Lend Me a Tenor, Crazy for You, Moon Over Buffalo, Twentieth Century, and adaptations of The Adventures of Tom Sawyer and Treasure Island. He studied music at Harvard with Leonard Bernstein and theater history at Haverford College and Cambridge University in England. Visit him at www.kenludwig.com. 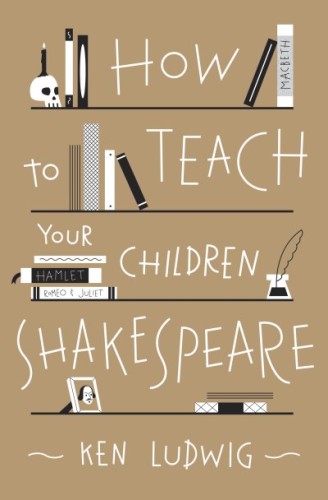 PRAISE FOR HOW TO TEACH YOUR CHILDREN SHAKESPEARE

“This specialized guide for parents hoping to instill a bit of literary genius into their youngsters . . . will inspire any who wish to give their children the ‘benefit of [Shakespeare’s] considerable knowledge and artistry.’”

“Ludwig’s enthusiasm for Shakespeare in his lucid, accessible, and inspiring book is a rare treat. You and your children will be transformed into the magic and mystery of Shakespeare and his stories in an instant. I highly recommend the book to all who have a love of language and history.”

Folger Shakespeare Library is a renowned center for scholarship, learning, culture, and the arts. Home to the world’s largest Shakespeare collection and a primary repository for research material from the early modern period (1500-1750), Folger Shakespeare Library is an internationally recognized research library offering advanced scholarly programs in the humanities; a national leader in how Shakespeare is taught in grades K-12; and an award-winning producer of cultural and arts programs—theater, music, poetry, exhibits, lectures, and family programs. A gift to the American people from industrialist Henry Clay Folger, Folger Shakespeare Library—located one block east of the U.S. Capitol — opened in 1932 and is listed in the National Register of Historic Places. Learn more.

Tickets: Free; Advance reservations are recommended. Reserve your seat at www.folger/theatre.edu or call 202.544.7077