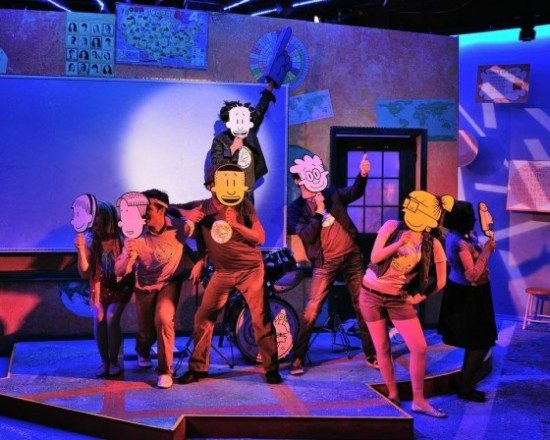 The Cast of ‘Big Nate.’ Photo by Bruce Douglas.

…a delight for all ages.

Big Nate tells the story of Nate Wright (Sam Ludwig) an eleven year old who has the world record for detentions in school,  22 to be precise. When the Battle of the Bands competition is announced at Nate’s school, his band called “Enslave the Mollusk” made up of Nate and his two friends Francis (Joshua Dick) and Teddy “V” Ortiz (David Little) are sure they can win. There is one rule that might be a problem. If any member of the band has 25 or more detentions they are not allowed to compete. Can Nate do it?  Can Nate stay out of trouble long enough to keep his band in the competition? Gina Hemphill (Angela Miller) is miss goody two shoes and constantly reports Nate to his teacher Mrs. Godfrey (Ayanna Hardy). Gina forms her own band made up of Jenny (Shayna Blass) who Nate secretly likes and Artur Pashkov (Tim Rogan) a new foreign student who Jenny finds charming. Gina’s band is also accepted into the competition and that is where we leave off. Can’t reveal everything you know.

The cast is first rate from top to bottom. Joshua Dick and David Little as Nate’s friends are hilarious and Ayanna Hardy as Nate’s teacher and other characters and also Tim Rogan as Artur with his broken English also deliver some very funny moments.

Shayna Blass as Jenny is endearing but I must say with Blass’s powerful voice it is interesting that her character which has been in the comic strip from the beginning does not have a solo number for herself. I imagine there is a good reason for this but I can always hope the creators of this piece in its next version will cast Blass again and give her a well deserved star turn.

Angela Miller as Gina has a powerhouse personality and great singing voice. She is the perfect nemesis for Nate and I know we will be seeing much more of Miller in the future. She really has it.

We now get to the actor that is charged with playing Big Nate. This character needs physicality, musicality, and other “alitys” that I can’t think of right now. Sam Ludwig definitely has all of this and more. His youthful appearance, wonderful voice, and spot on acting skills make him the perfect actor for this role. It is so great to see him again as the lead in this production.

The score by Christopher Youstra (Music/ Lyrics/Orchestrations/Musical Director) and Jason Loewith (Lyrics and also the book) has a contemporary style to it that fits the material. Songs like  “Love Is A Four Letter Word” and “A Day In The Life of Big Nate” are just two of the score’s highlights. Also I can’t forget any song entitled “Year Old Cheez Doodles are Better than Love.”

Director Michael Baron directs the show with lots of energy and Misha Kachman’s set captures the world of Lincoln Peirce’s characters perfectly.  Choreographer Kate Arnold Wernick’s choreography enhances the musical numbers very nicely. “Rock Star” was a particular stand out. I also would like to mention JJ Kaczynski’s projections, which utilizes artwork from the comic strip.

Overall Big Nate is a delight for all ages. With Ludwig and company and a great book and score as directed by Baron, this is a musical that I can highly recommend for you and your children to enjoy together.

Running Time: 63 minutes with no intermission.