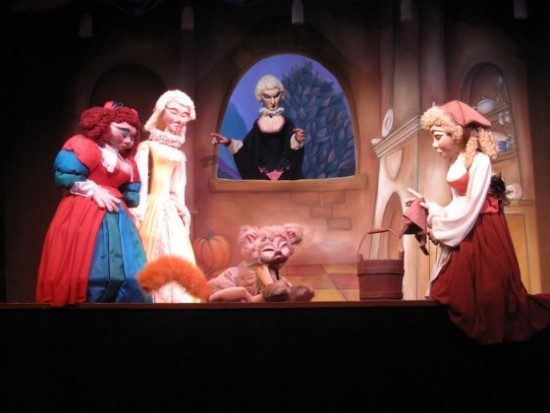 Cinderella works at her chores. Photo by Christopher Piper.

There are few places in the DC area where puppetry is performed today, but in the surroundings of Glen Echo Park it is alive and well with the Puppet Co. Artistic Director Christopher Piper is preserving a slowly dying art form, and for the last 8 years his company has been bringing his wonderful presentations to audiences of all ages at Glen Echo Park, just a few feet away from its signature carousel. Cinderella is the Puppet Co.’s latest presentation and while it might not be the Disneyfied version kids of today are use to, it is still an enchanting story.

…a winner for kids and adults alike.

With a soundtrack by Jacques Offenbach and set in 17th century France, we meet the cinder girl named Ella who has a cat named Prince Charming. Ella’s father has to go away and she is left in the “care” of her wicked stepmother and her two stepsisters. Cinderella dreams of going to the ball and dancing with the prince, and you can figure out the rest of the story from there because it is quite familiar. 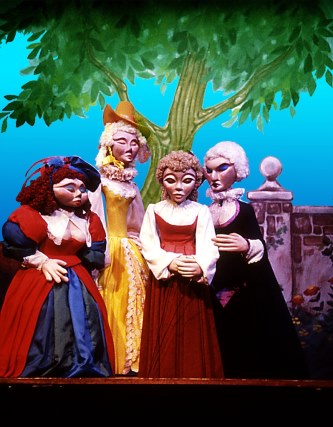 I was amazed that all of the characters are operated and voiced by only three people. They are Christopher Piper (who built all of the puppets and wrote the script), Allan Stevens (who also designed the sets/costumes and directed), and a little dynamo named Molly MacKenzie who is new to being a puppeteer but you would not know it from watching the show. Her spunk alone is worth the price of admission as she gives voice to Cinderella.

This production also features clever ways of transforming things such as a pumpkin into a carriage and Prince Charming the cat into a coachman. How do they do it? You have to see the show to find out. NAH NAH!!

With all of the high tech stuff that kids are exposed to nowadays the Puppet Co. fills a much needed void. Piper’s puppets (say that five times fast) are expertly made and the detail is something to marvel at. 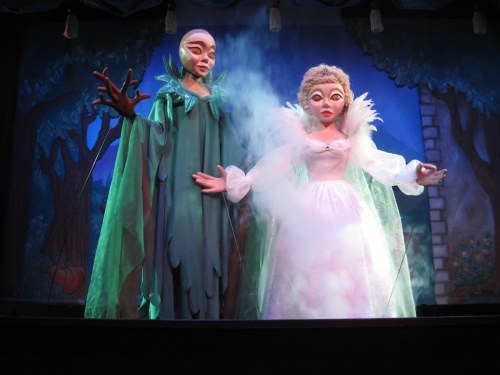 In the guise of a hazelnut tree. Photo by Christopher Piper.

This Cinderella is a winner for kids and adults alike. With the nice weather coming take your family to Glen Echo Park and check out the fine work that the Puppet Co. is doing. No strings attached here, you’re in for a grand time.

Running Time: 45 minutes with no intermission.