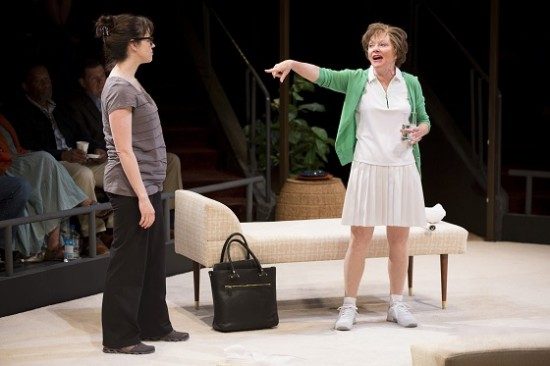 Jon Robin Baitz’s Tony Award winning play Other Desert Cities is one of those plays that upon first viewing in NYC I said “Wow!!” I found it to be extremely well acted and really well written. The story is very dramatic, as it explores what happens when a child, who has had a breakdown, comes home to Palm Springs for Christmas after completing a novel exposing her family’s dirty laundry, and what she says caused her brother to commit suicide. The production currently playing at Arena Stage still has Baitz’s fantastic script and good physical elements, but somehow–with few exceptions–it doesn’t match the original cast acting wise and what was dramatic on Broadway comes off as melodramatic in this version.

Baitz’s script has everything to deliver a knockout punch…

Amidst Kate Edmunds’s gorgeous setting of a home in Palm Springs, we meet the Wyeth Family on Christmas Eve. The father Lyman (Larry Bryggman) and mother Polly (Helen Carey) are both former Hollywood actors that are now very active in the Republican Party. Son Trip (Scott Drummond) works on a celebrity courtroom TV show in Hollywood and can’t get use to the Palm Springs lifestyle. Daughter Brooke (Emily Donahoe) was never accepted by her family as a child and is trying to come to terms with the details of her brother’s suicide during the Vietnam War after he bombed an army reserve post. She has written a novel based on her family’s experience and comes home to give her parents a copy to read before excerpts are published in a prominent magazine. As you might guess the parents are not happy with this decision, as they both feel it will ruin their reputations. 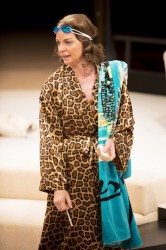 We also have Silda Grauman (Martha Hackett) Polly’s recovering alcoholic sister who is now staying with the Wyeths after falling off the wagon. She has been helping Brooke with recounts of what the family was going through during that time. Polly is not happy with this and as we come to find out there were some things left out of Silda’s memories.

Here is a case where you have everything given to you script-wise, but the actors with the exceptions of Donahoe and Drummond just don’t deliver the dramatic goods. Bryggman’s Lyman is quite stiff at times and when it comes time for the big confrontation between him and Polly it is just underwhelming. Helen Carey’s Polly is better, but for me it was still missing the powerhouse controlling factor. Martha Hackett’s Silda was the biggest surprise. Judith Light deservedly won a Tony Award for her portrayal of this character but here it almost seems as if she fades into the woodwork after a while.

I did however enjoy Scott Drummond as Trip. He brings some light moments to the proceedings and the scenes between he and his sister are quite moving. 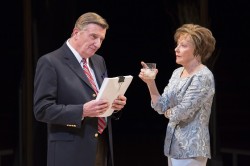 Larry Bryggman and and Helen Carey. Photo by Scott Suchman.

Emily Donohoe is by far the best of the cast. Her portrayal of Brooke is heartbreaking at times as she tries to come to grips with her past. It is a truly remarkable performance.

Director Kyle Donnelly uses the Fischandler Stage to full advantage, but it did strike me that this play was directed more to one side than the other, making it hard to hear sometimes.

It’s not that I didn’t like this production, it’s that I wanted the same effect I had the first time I saw it. I wanted to be able not to move at the end of the performance. With the exception of a couple of performances, this did not happen. It’s too bad because Baitz’s script has everything to deliver a knockout punch to its audience. In this case it’s more of a light tap.

Running Time: Two Hours and 20 minutes with one intermission.