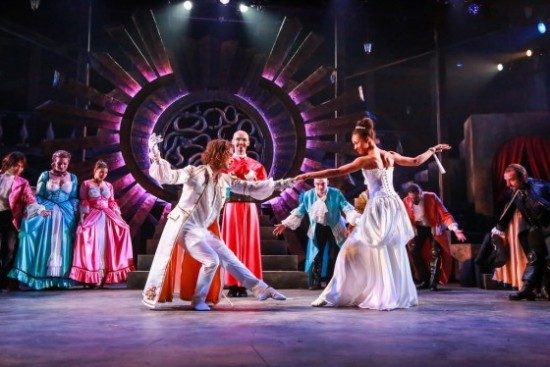 Synetic Theater, that theatre best known for its “wordless” Shakespeares, or wordless Jekyll & Hydes—or wordless “anything”—has decided to speak in its new production of Alexander Dumas’s The Three Musketeers. Then again, what Synetic is also known for is risk-taking (as if a theatre that offers an original production [adaptation] with each new show weren’t taking a huge risk each time they took to the boards).  With this production, however, Synetic ups the ante.

The show abounds in delightful visuals and robust good times.

With comic dialogue and dramatic scenes, romantic dance and slap-stick foolery, sword fighting from one end of the stage to the other, with an evil Cardinal Richelieu and a gorgeous Queen Anne and resourceful Constance, and of course with three not-so-honorable Musketeers and one more-than-honorable wannabe Musketeer, what this show does not have is probably only what director Paata Tsikurishvili decided not to squeeze in. 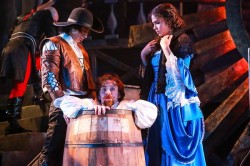 As a showcase of Synetic’s talented creative and performance ensemble, particularly its fight choreography (by Ben Cunis) and its scenography (set and costumes by Anastasia R Simes), The Three Musketeers is fabulous.  On a multi-level set under haunting lights (Brittany Diliberto) with bodies flying and flipping, swords slashing and glinting, one watches amazed at the troupes’ discipline and beauty.  As a tale of adventure and romance and comedy, however, the production stumbles, with one too many sword-plays, two too many extraneous dances, and three or more too many corny jokes and was-that-necessary moments.  As a result, a tight two hours of swash-buckling balloons beyond its capacity to sustain our rapt attention.

To be sure, the plot of The Three Musketeers, adapted by Ben and Peter Cunis, is epic enough, and complicated enough, to require a few words of exposition to tie the multiple plots and diverse characters together.  And for the most part the story conveys even if roughly around the edges.

The central story focuses on D’Artagnan (Dallas Tolentino), a young country boy who comes to Paris with dreams of joining the King’s Guard, the Musketeers.  Naïve and full of bluster, Tolentino’s D’Artagnan immediately finds himself with three sword duels on the same day, with three Musketeers (that’s right, the book’s title).  Athos (Ben Cunis), Aramis (Matthew Ward), and Porthos (Hector Raynoso) have fallen on hard times, as the authority of King Louis XIII (Robert Bowen Smith) has waned since Cardinal Richelieu’s power has grown (Dan Istrate).  Richelieu now has his men, led by the fierce Rochefort (Peter Pereyra), do whatever is necessary to rob the Musketeers of their status.

For D’Artagnan to become a Musketeer, he must perform an act of heroism and be recognized by the court.  Fortunately, the King’s queen, Queen Anne (Brynn Tucker) is having an affair and now needs someone to help her handmaid Constance (Brittany O’Grady) retrieve a diamond necklace from the Queen’s lover (Mitchell Grant), which wouldn’t be so hard if there weren’t a deadly assassin, Milady (Irina Tsikurishvili), running around killing people.  To add just a little spice to the plot, Dumas has made Milady Athos’s wife, whom this more fatherly Musketeer hung for deceit many years ago.  That’s right, she was hung but she survived—much to Athos’s surprise.

Dallas Tolentino puts in a strong performance as the young adventurer in search of love and glory.  His odd combination of bravado and virtuousness serves the script well, and his excellent swordplay and magnificent leaps allow us to experience D’Artagnan’s potential.

Ben Cunis, Matthew Ward, and Hector Raynoso make for a solid trio of rabble rousers (or should I say Musketeers?).  Having not read the original novel, I wondered if the name “Musketeer” had attracted young D’Artagnan more by reputation than by present glory.  Though more than capable with a sword, these womanizing, drunken soldiers could hardly be well suited as the King’s Guard. Cunis, Ward, and Raynoso do a wonderful job conveying just how much fun these swashbuckling soldiers have, both on duty and off. 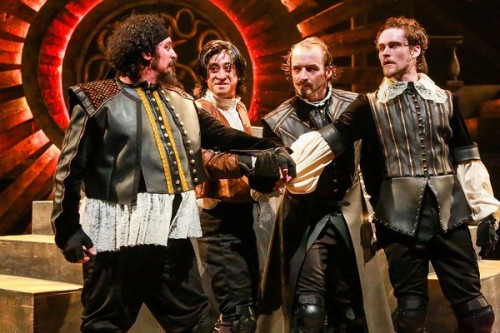 Istrate’s Richelieu captures the sinister overtones of the character as does Tsikurishvili with her Milady without being given an opportunity to delve much deeper.  Perhaps their dance, when the two meet to exchange diamonds for cash, was meant to explore a different aspect of their relationship, but it left this viewer more confused than illuminated.

Richelieu’s sinisterly nature is balanced (and perhaps explained) by Smith’s portrayal of King Louis XIII as a raging duffus.  One of the funniest characters in the show for his total ineptness, he makes it easier to like a villain like Richelieu because he at least could keep “the carriages running on time.”

Bottom line, however, for this Three Musketeers, with its bawdy physicality, its sweat and sexuality, its adventure ethos, and “Aren’t We Having Fun” comic sensibility, one is better off just sitting back and letting the show happen.  The show abounds in delightful visuals and robust good times, which might be just enough to help you forgive or forget those “almost” moments when things didn’t quite work.