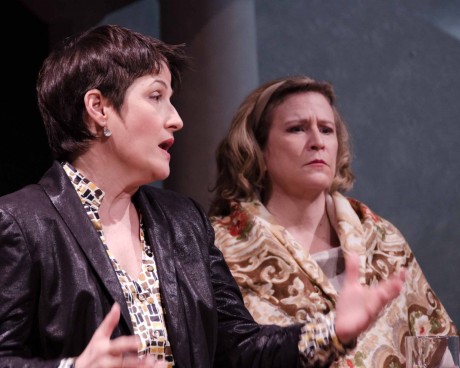 Little Theatre of Alexandria’s 33 Variations is a wonderful piece of theatre that intertwines themes of genius, mortality, and the preciousness of time that resonates both to music lovers and lovers of life. Moises Kaufman’s work, nominated for a Tony yet only a having a short-lived run on Broadway, is an art lover’s delight. It is an unabashed, sentimental homage to Ludwig von Beethoven’s work and his special predilection with his 33 variations piece, which he struggled with for years thru hearing loss and completed as the last composition before his death.

…sit back and wonder, with a smile to the lilting melody.

However, we get there by starting in the present. In a look back scenario with two separate, parallel plotlines, we first have Dr. Katherine Brandt, (Sarah Holt) a musicologist/researcher, who soon learns that she is succumbing to the debilitating disease ALS. Her life work is to understand why Beethoven had this obsession with the 33 variations, which was an open contest to ‘riff’—if you will—on a simple waltz tune that music publisher Anton Diabelli has composed. 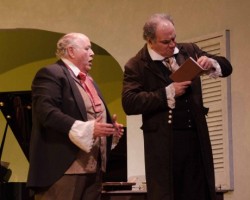 She confronts her mission by going to Germany and into the master’s archives, in spite of failing health and the admonitions of her doe-eyed daughter Claire (Rebecca Phillips), with whom she has a less than perfect relationship. Together, she and her boyfriend Mike, an engaging if mugging Matt Baughman, provide support and lend a touch of humanity to her quest. Dr. Brandt is clinical and cold—a measurer, searching for information, and her Claire is a wandering artist, always on a path to mediocrity, yearning for mom’s  love. At a time when most people would devote themselves to family, Dr. Brandt buries herself in the Beethoven archives in Bonn, hoping to crack the mystery before she dies.  Holt presents an appropriately dispassionate persona, but misses some of the venues that the script offers for redemption.

Intertwined in Dr. Brandt’s research and health deterioration are the latter days of Beethoven’s life and his struggle to continue on his waltz variations.  Beethoven (Elliot Bales) takes us thru Vienna of the 1800s, as he takes on the challenge of Diabelli’s waltz. Indeed, as his hearing failed and his illnesses mounted, the great master put aside working on the legendary Ninth Symphony in order to write not one but “33 Variations” on this modest theme.  Why, the world has wondered? Can the answer be unlocked?

LTA’s production, directed by Joanna Henry, is a winning event, kept from maudlin trappings by uniformly crisp staging. Nothing is worse than a dragging show, and this didn’t fall into it, helped by fine lighting by Ken and Patti Crowley and a useful, rounded multipurpose set courtesy of Chris Feldmann. The special effects of the compositions transposed onto the back wall I found especially effective. Costumes (Annie Vroom) were appealing, and the pompous Diabelli (wonderfully played by veteran David Rampy) is appropriately garish.

One nice construct of the show is viewing the billboard on top of the stage track the Variations, as we hear them, and the actions involved around them, to the sad march to the end, for both Dr. Brandt and Beethoven. Each featured variation is played out enjoyably by our onstage pianist Matt Jeffrey, and is especially skillful in a scene where Beethoven, now deaf, imagines and feels the music, changing his playing to Beethoven’s instructions.

The troubled journey of Dr. Brandt is often times upstaged by the Beethoven story which pops with energy and detail. Though creating the most complex pieces in musical history, his life is quite simple and rudimentary, reflecting early 1800’s sensibilities and an unerring focus on craft. 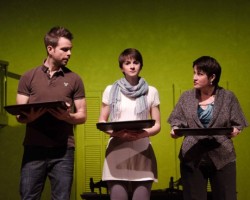 Bales is simply powerful as the master composer. The veteran actor captures both the swagger of the genius and his vulnerability in a performance seeped with insight into the artistic temperament—a chance to not hold back as a performer and he wisely does not. While there are times when the proceedings edge into high melodrama, his performance has such rhythmic richness that it felt genuine.

At the end, in a marvelous “what if” scene, Dr. Brandt has passed, but is visited by the spirit of Beethoven, as both can be understood and have rest.

Was her professional life quest worth the personal cost? As Dr. Brandt says at the end, “Maybe he simply wrote 33 variations to top Mozart, who only did 32!” We will never know, but sit back and wonder, with a smile to the lilting melody.