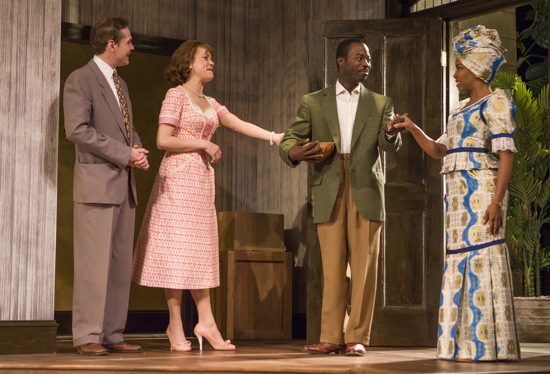 Centerstage is up and running with the second half of their Raisin Cycle, Beneatha’s Place, Playwright and Artistic Director Kwame Kwei-Armah’s impressive complement and response to their concurrent production of Bruce Norris’ Clybourne Park. While the latter play expands the story of the family home in Lorraine Hansberry’s A Raisin in the Sun, Beneatha’s Place extends the life of one of her characters, Beneatha Asagai Younger, depicting her marriage to a prominent Nigerian political activist and, later, her career as a professor of African-American Studies.

The similarities between Clybourne Park and Beneatha’s Place are striking. They occur in one house, over two acts, in two distinct periods (namely, 1959 and the present). Director Derrick Sanders uses the same cast (with the exception of Kim James Bey, who appears only in this production as Aunty Fola), to explore many of the same questions, in much the same style. The plays also share a structural oddity, in that the stakes are considerably higher in the first act than the second; gentrification and curriculum planning, while topical and divisive, lack the life-and-death immediacy of Segregation and Nigerian Independence. Thus, both works spend the second act trying to cope with their established history (though Beneatha’s Place benefits from a consistent title character). These parallels may explain Hansberry’s absence from the Raisin Cycle; Beneatha’s Place and Clybourne Park have more in common with each other than either does with A Raisin in the Sun.

Overall, Centerstage has crafted a surprisingly original and thought-provoking response to Norris’ play…

This raises the question of whether the play exists solely as a companion piece or has its own, independent merit. Having seen both, and considering what is remarkable and particular to this piece, I would argue for the latter.

Kwei-Armah doesn’t just push the conversation further; he complicates and remixes it.  And while the home remains central (with a handful of connotations regarding Beneatha’s “place”), the focus always lands on the masks—collected and displayed by Beneatha’s husband, Joseph (Charlie Hudson, III). I won’t describe them here. But whatever else happened onstage, my gaze never drifted far from the visual and emotional brutality of that back wall.  And they’re not just there; they’re used. Daniel’s (James Ludwig) masked “performance” in Act One is extreme beyond your imagination; it’s the best and worst moment of the show. Your jaw will stick to the floor. 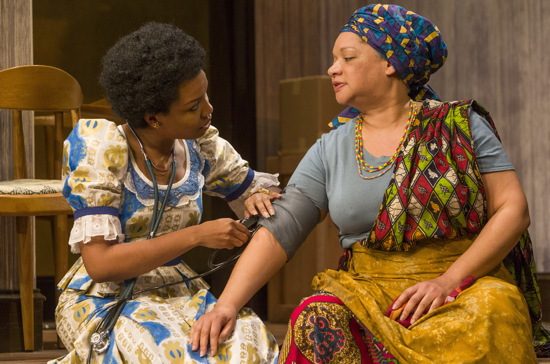 But the real gem of this production is Jessica Dukes’ portrayal of Beneatha in Act Two, having aged fifty-odd years over the course of intermission and conducting a meeting concerning the proposed inclusion of “Critical Whiteness Studies.” It’s a pitch perfect characterization, and one of the great strengths of this production, absent from Clybourne Park: a character who remembers. Someone who was really there.  The ensemble gives strong performances as well; Ludwig is excellent throughout, particularly in his c**k-fight-esque debate with another professor, Gary (Jonathan Crombie), over his video game analogy for affirmative action and race.

The writing occasionally suffers from heavy-handed proclamations at the expense of subtext (Daniel’s beautifully crafted hint regarding his sexuality, for instance, is trampled over with explanation in the very next scene), and things falter at the very end—the only moment in which Kwei-Armah seems to be copying Clybourne Park for no justifiable reason or effect. As a result, the message is slightly muddied; one hopes that the play is not just saying, “Things get ugly when we talk unguardedly about race”, but rather, “Race doesn’t need to be at the center of discussion if everyone is truly on equal footing, but we’re not there yet.” Still, the play draws many interesting parallels between the destructive legacies of colonialism and segregation, and manages to be quite funny along the way.

The production benefits from the same, highly competent design team as Clybourne Park (Jack Magaw deserves another round of praise for the set dressing and masks.) Overall, Centerstage has crafted a surprisingly original and thought-provoking response to Norris’ play, one that will hopefully have a life beyond this production.

Advisory:  Some material may be inappropriate for children.