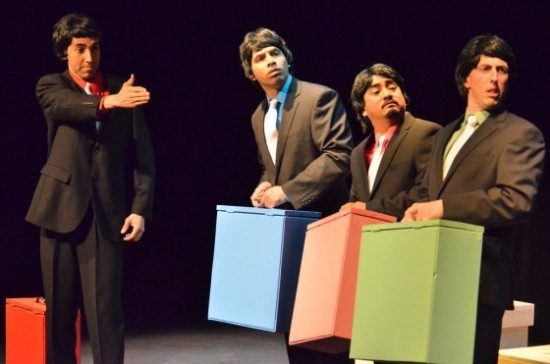 In Club de Caballeros (Rotos de amor), or The Gentleman’s Club (Love Torn), we are able to see the truly desperate lengths that men will go to in order to achieve love. This hysterical comedy by Argentinean Playwright Rafael Bruza demonstrates this through four men who attempt to heal their broken hearts by rather ridiculous means.  They ultimately triumph, their success hidden in their failures. Their search for love and a cure for their broken hearts does indeed, as the director, Mario Marcel, states “border on the grotesque,” not only because of the outrageous behavior, ranging from changing their hair color to self-medication with drugs, but also the determination to win love they so desire.

The intimate setting … enables a relaxed and interactive atmosphere for the audience, adding to an overall enjoyable performance.

We first meet Rodriguez, a clever and smooth character, who we learn is a high-level government official that has been humiliated by his wife; she has taken up with the tango instructor and thrown him out. His three friends come to visit and offer their support, remarking on how far he has fallen, for not only is he being cuckolded by his wife, but he is forced to live in the small shed in the backyard and the house is guarded by the ferocious dog, Delilah. Played by Alex Lopez-Montañez, Rodriguez handles his situation with sarcasm and a cool attitude, often mixing innuendos about the dog and his wife, much to the audience’s amusement. Though he claims his reason for wanting to get her back is to reclaim his honor, he cannot hide from his friends that he does indeed love his wife. Despite his and his companion’s extreme actions throughout the play, as well as the caricatures of the other characters, Lopéz-Montañez distinguishes himself in playing the witty Rodriguez in a subtle way that well balances out the rest. 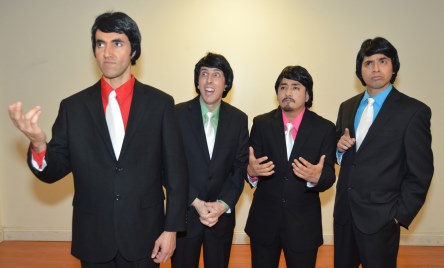 In the next scene, we are introduced to Berlanguita’s dilemma. He sits in front of the audience with a sad bouquet of flowers sighing with a slightly dopey grin on his face when his friends enter. They discover that he has been in love with a woman for fifteen years but has never once spoken with her out of fear of ruining the relationship. He continues to love her, despite her being married with children, and continues to sit across the street and watch her each week: a borderline stalker, his companions note, much to the audience’s amusement. Though he is encouraged to speak with her, he explains to his friends that his love for her is purely platonic, and he is afraid to sully that love. Jerry Daniel gives an excellent portrayal of the dual role of Berlanguita, for he also provides the voice of El Mudo, the Silent One of the group, translating the grunts and gestures of the character for the rest of the group. He is a jolly and almost clown-like character, yet heartfelt in his love and devotion.

Artemio opens the third scene outside his wife’s window and in one of the most hilarious scenes attempts to regain her affections by a rowdy musical balcony serenade, pleading with her to accept his apologies for his faults and take him back. The “fault,” of course, is itself just as ridiculous: he snores. The attempt is a miserable failure and the voice of his wife shouts rudely calling them “barrachos” (drunken fools) as well as hurling other profanities. Poor Artemio proceeds to enumerate the various ways in which he has tried to please his wife: reciting poetry, rubbing her feet, catering to her every whim, yet she has still kicked him out. The scene is an amusing farce of the traditional troubadour wooing his lover, for rather than a smooth Latin lover seducing his lady, we have a desperate and somewhat pathetic man who’s wife is tired of his adoration of her. Played by a talented Alex Alburqueque, Artemio adds his own brand of humor to the group with his often-truthful observations.

Juan Biachi, playing the Silent One, El Mudo, is clownish and eccentric character who moans and grunts to communicate with the other character and is interpreted somehow mysteriously by Berlanguita. Biachi plays El Mudo in a way somewhat reminiscent of Harpo Marx; despite his inability to speak, his expressions and actions speak for him for the most part, adding a light-hearted silliness to the group. He suffers his own loss, however, of his wife who has been dead for fifteen years and in all that time he has not spoken. Though his silence adds show-stealing humor for the audience, we realize that it hides the greater pain of his grief. 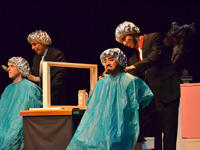 The first four scenes set the stage for a club of heartbroken men and the audience watches their bizarre yet comical attempts to heal and find love.  Director Marcel does an excellent job of not letting the personal stories distract from the play’s premise, but rather balances them out with the characters interaction in their attempts to remedy their problems. Their individual personalities and brands of humor blend into a harmonious quartet in which each man’s problems is fused as one, along with their failures or successes.

It is quickly apparent the overall lesson which Rafael Bruza wishes to convey: “Is there anything more ridiculous than a man in love?” Their desperation throughout the play borders on the absurd, yet their love-sickness does not leave the audience heavy-hearted, but instead able to recognize the humor in matters of love. The intimate setting of Teatro de la Luna enables a relaxed and interactive atmosphere for the audience, adding to an overall enjoyable performance.

Advisory: Recommended for mature audience (15 +).     In Spanish with English Subtitles.

Caitlin Hamon has a Bachelor’s degree from George Mason University, and is currently pursuing her Masters education. She works as a research assistant and tutor on George Mason and Mary Washington Campuses. She has been involved in various productions as a singer, actress, and dancer since early childhood; though no longer in the performing arts, maintains an active interest in Theatre and Music and occasionally works with the local Stafford Choral Society.