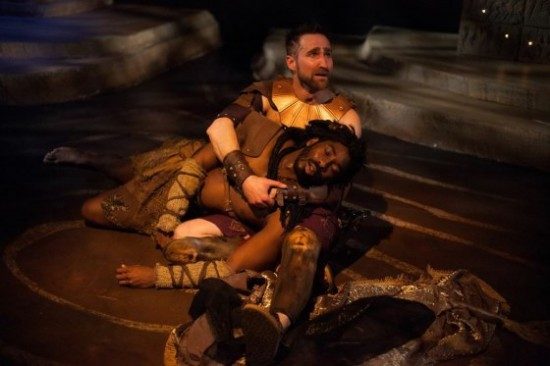 There’s something powerful about the straightforward, the clear and articulate, the simple—particularly in this age where we, though interested in the historical and the “antiquarian,“ rarely consider the artifact as it is.  With Gilgamesh, Constellation Theatre’s world premiere production of the world’s oldest tale, poet Yusef Komunyakaa’s beautiful pitch-perfect text and dramatist Chad Gracia’s structurally edifying frame take center stage, offering Washington audiences that rarest of opportunities: ancient wisdom.

I, for one, feel honored by the witnessing.

To be sure, a willful suspension of disbelief is required of the audience.  Director Allison Arkell Stockman–with set and costume designers Ethan Sinnott and Kendra Rai–has elected to represent Sumaria (Iraq) circa 2,500 BC.  So one enters a theatre surrounded by cuneiform and visions of loincloth.  One wonders, fearfully, if one’s worst theatrical nightmare has begun: two hours of archaic verbiage performed like bad Shakespeare. 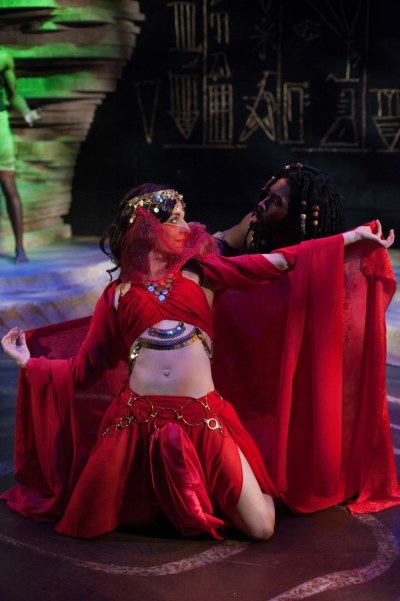 Then, the music begins.  Tom Teasley’s rhythms, familiar yet exotic, fill the space, and the air and the audience begins to move, if ever so slightly.  Instruments as strange as they are beautiful appear, and we are ready.

When the lights come up on the action, an African lies huddled on the stage.  An actress with a deer mask enters; a dance begins between man and deer, primitive and simple.  No words, only sounds.  When the deer becomes caught in a snare, the man frees her; and the hunters are worried.

Gilgamesh is the King of Uruk.  He has been taught since birth that he is a man-god, that he is exceptional, unique among men.  And he lets everyone in Uruk know this, demanding tributes beyond what the people can endure.

When Gilgamesh hears of the African, Enkidu, the man who dances with the deer, he wonders if he be man or beast.  He sends his priestess, the Woman of the Red Sashes, to seduce him; if the seduction works, then the African’s status as a man will be proved.

It works, both on Enkidu and on us, the audience, as we begin to realize that this tale, this Gilgamesh, will offer something different than the artifice of theatre, something more than the actor on display.  This Gilgamesh, like the creation myth, will open a window onto our collective past; it will speak to what it means to be a human being.

…will leave you lingering with wonder.

Joel David Santner embodies the King with force and grace.  Although his transformation from an arrogant, self-centered King to one with enough humility to acknowledge the needs of others could have been more realized physically, Santner gives Gilgamesh a wide range of emotions, subtly and authentically played.  His friendship with Enkidu is particularly stirring.

Andreu Honeycutt portrays Enkidu with raw charm, capturing not only his primitive sensibility but his pride and fearlessness.  His fight scene with Gilgamesh, choreographed by Casey Kaleba, was exquisite, leaving me gripping my chair in suspense.

Emma Crane Jaster plays the Woman in Red Sashes, giving the seductress a fluidity of movement and a sincere desire for self-realization.  Her dance of seduction, which she also choreographed, was superb, enthralling us as she removed red sash after red sash in a playful dialogue with Enkidu that ended in speech.

Katy Carkuff does a wonderful job portraying multiple characters, but none more so than the barmaid Siduri.  More than any other character, Siduri’s humanness comes through, as Carkuff succeeds in giving the young woman a passionate vulnerability with just the right laugh. 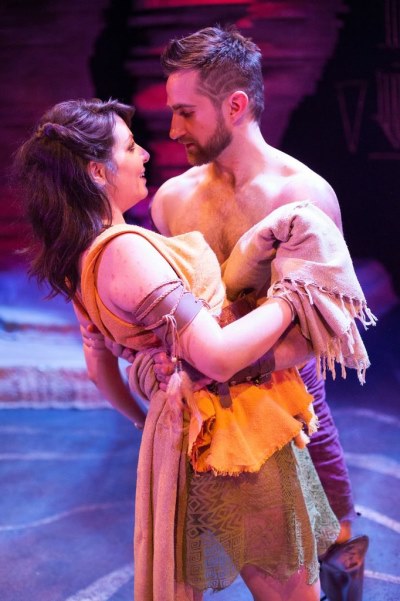 The rest of the ensemble, made up of Charlotte Akin, Jim Jorgensen, Manu Kumasi, Ashley Ivey, and Nora Achrati, play multiple characters, and each does a solid job carrying his or her share of the story, which is indeed an epic tale told in word, movement, mask, and music.

And indeed, it is the tale’s rhythmic mix of all those elements that makes this Gilgamesh so successful, for around the next plot point another vision appears.  That vision may be Humbaba (Jorgensen’s Cedar Man), or Istar (Achrati’s gorgeous goddess of love, sex, and war), or the incredible Bull of Heaven (performed by Ivey and Kumasi), or it may even be the four headstones that Gilgamesh must fight to reach Jorgensen’s Utnapishtam, the one who survived the Flood.  Whatever the vision, clearly drawn, the tale fascinates as only an ancient vision can do.

Perhaps, one needs to be a lover of Joseph Campbell’s Hero with a Thousand Faces to truly appreciate Gilgamesh.  Perhaps, during these times—where exceptionalism is all the rage, where the personal and the individual constantly trump the universal—stories about what it means to be human are considered passé, or even trivial.  Perhaps, our ability to suspend our disbelief has been forever corrupted by Reality TV and high-tech computer graphics.  If so, then Constellation Theatre’s simple, intimate portrayal of Gilgamesh will strike you as so much silliness.

If, on the other hand, you find sacred narratives illuminating, and not the least bit trite, then this world premiere of Gilgamesh must be seen, and heard, and witnessed.  It will leave you lingering with wonder.

Running Time: one hour and 50 minutes, with a 15 minute intermission.