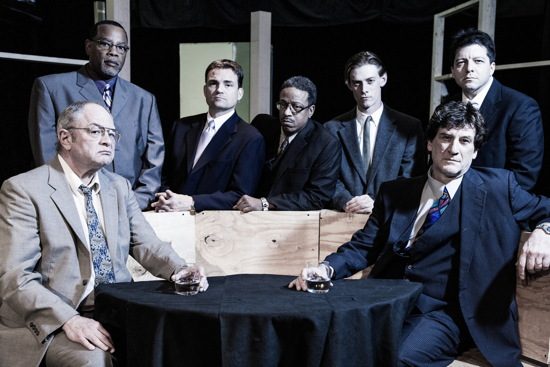 The collapse of the housing bubble in 2007 is considered one of the major causes of the recession. It in itself was caused by unscrupulous businessmen focused on short-term gain at the expense of long-term security. While David Mamet’s Glengarry Glen Ross was written in the 1980s, it is a microcosm of the brutal business practices that devastated an entire country–where powerful, amoral people prey on the gullible.

Glengarry Glen Ross, currently playing at Fells Point Corner Theatre, is the story of a group of real estate salesmen trying to make a quick buck in a competitive market. Shelly Levene (Jeff Murray) is on the verge of losing his job if he does not make another sale, while Richard Roma’s (Howard Berkowitz) star is on the rise, though largely because of the way he plays the game. Meanwhile Dave Moss (Vic Cheswick, Jr.) and George Aronow (William Walker) contemplate scrapping everything and moving to a different firm. Everything changes when the office has a break-in, at which point the play turns into a cross between a whodunnit and a treatise on failure.

[If you] find pleasure in a well-designed production, good acting, and a great script, I highly recommend it.

Director Barry Feinstein has done an admirable job humanizing Mamet’s peculiar blend of jargon and profanity. Needless to say, this is not a family-friendly show–even without the swearing, the audience has to contend with a racist rant about clients from the Indian subcontinent and at least a little bit of sexism. That being said, Mamet’s brand of “in-yer-face theater” is exhilarating, and this production is not only entertaining but instructive.

As far as performances go, the comedic timing in this play really stood out–in particular, the interactions between Cheswick, Jr. and Walker, and Berkowitz’s smooth and clever con of the naive James Lingk (played by David Shoemaker). At the same time, however, there are powerful dramatic moments, especially Murray’s portrayal of Levene’s indignation at the decline of his career. The one discordant note in the ensemble was Sachsman’s police officer, whose volume did not match his expression. 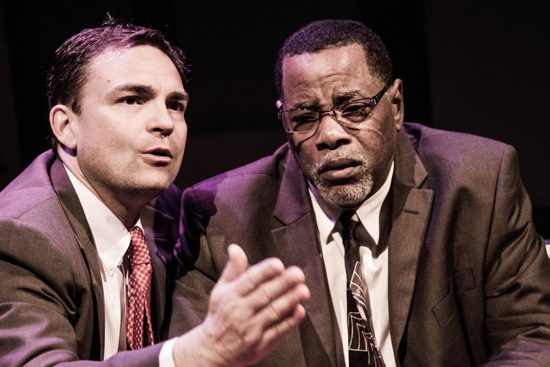 Kudos as well to the production team, who created a seamless viewing experience. The blackouts, for instance, were under a pale blue light, and accompanied by jazz music, adding ambiance to what could have been a boring transition. Bush Greenbeck’s set design, whose background encompassed both an office door and a restaurant entrance, was actually quite effective, and the restaurant booth was perfect in its accuracy.

Glengarry Glen Ross is a really interesting play, and it says a lot about what goes on in the minds of the people in the business of making money. Of course, it’s not for everyone–David Mamet’s use of words can be an acquired taste. But if you are not offended by profanity and find pleasure in a well-designed production, good acting, and a great script, I highly recommend it.