Theatre Review: ‘In the Heights’ at Toby’s Dinner Theatre of Columbia 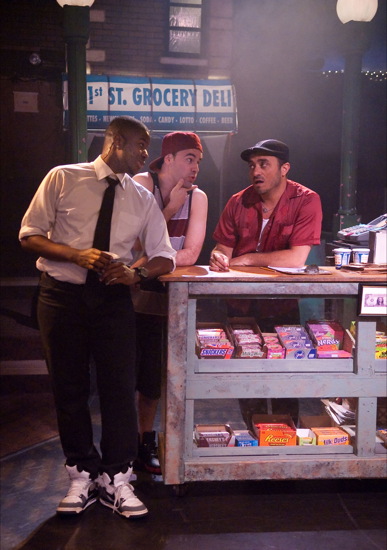 Toby’s Dinner Theatre of Columbia has hit all the marks with its fabulous regional premier of the four-time 2008 Tony Award-winning musical In the Heights. With music by Lin-Manuel Miranda and book by Quiara Alegría Hudes, it can best be described as a spicy stew of rap/hip-hop/musical/operetta. It is as fresh and infectious as the characters and music that populate the neighborhood of Washington Heights in Manhattan.

Like the Irish immigrants before them, the members of this struggling Latino community came from Puerto Rico, Haiti, the Dominican Republic, Cuba and other parts of South America and the Caribbean in search of the American Dream and a better life for their families. Our guide is Usnavi (an astounding David Gregory), the owner of a bodega—the corner coffee shop—the center from which the story ebbs and flows over three days around the fourth of July.

We are introduced to a parade of characters as day breaks and Usnavi opens his store, chasing away Graffiti Pete (Calvin McCullough), the local tagger who is a friend of Usnavi’s young cousin, Sonny (Ryan Alvarado). Sonny is working alongside Usnavi over the summer. Though he provides much of the humor, Sonny later reveals the more thoughtful and intelligent aspects of his character.

Every voice is a powerhouse and the acting is superb.

The beloved matriarch of the barrio (means neighborhood in Spanish) is Abuela (grandmother in Spanish) Claudia (Crystal Freeman), who raised Usnavi after his parents died. She comes to the bodega religiously for her lottery ticket. She the longest resident of Washington Heights, Claudia’s mother brought her to this country as a child in 1943. Claudia did her best to make ends meet working as a maid. Though elderly and tired, she still has hope and spirit.

Daniela (Santina Maiolatesi) is the sassy and funny “queen of gossip” runs the local beauty shop, employing Carla (Olivia Ashley Reed) and Vanessa (Nadia Harika) with whom Usnavi is secretly in love. Vanessa is having financial difficulties because of her alcoholic mother and dreams of flying away from the barrio on a plane. 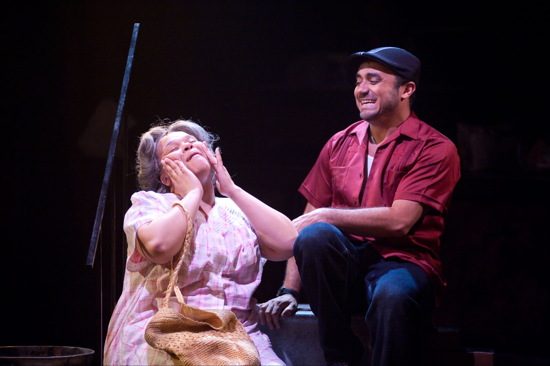 Proud and hard-working Kevin Rosario (David Bosley-Reynolds) and his strong, but loving wife, Camilla (Tina Marie DeSimone) came from Puerto Rico. They own the Rosario Car and Limousine. Though the business is struggling, they are joyously anticipating the return of their daughter, Nina (Alyssa V. Gomez) from her first year on scholarship at Stanford University. She is the shining hope of the community. What they don’t know is that she has dropped out. The scholarship was not enough to cover all her expenses and the pressures of school and working two jobs became overwhelming.

Benny (Marquise White) is African American and Usnavi’s best friend. He was the childhood friend of Nina’s and now works for Kevin, who is a father figure to him. He is full of big dreams and high energy. Weaving in and out of the story is Piragua Guy (Tobias Young) who pushes his snow cone cart throughout the barrio, struggling to make ends meet but doing so with a happy heart. 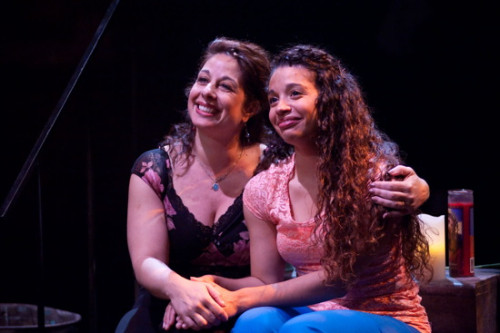 It is all in the details and co-directors Toby Orenstein and Lawrence B. Munsey and the entire production staff have produced a Broadway-quality show with a perfect cast and superior production value. Across the board, this is an extremely gifted group of actors supported by an equally talented ensemble of dancers and singers. Every voice is a powerhouse and the acting is superb.

Though you do not see them, the orchestra under the direction of Cedric Lyles is phenomenal. The choreography is shared with the directors and Christen Svingos and is vibrant and exciting, seamlessly blending Latin dance with hip-hop. It is very hard not to get up and join the cast. The set design by David A. Hopkins is brilliant, using the four entries of this theater-in-the-round as Usnavi’s bodega, Daniela’s beauty shop, the Rosario’s business and the fourth, the fire escape to a barrio apartment that acts as several residences.

In the Heights is not a story of one group of people. It is the story of all of us – our dreams, struggles, love, laughter, loss, pain and hope. If you love theater and its craft, this is a must-see production.

Running Time: Approximately two hours and 30 minutes, with one intermission.