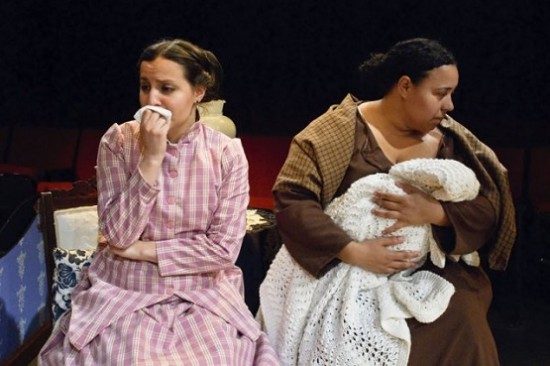 In spite of its subtitle—which can set off alarm bells among the more genteel set—the emphasis in Next Room is on relationships and the challenges that come with the pursuit of real happiness – not “quickies” or cheap thrills, mind you, but happiness.  Set in ever-so-proper Upstate New York during the Victorian era, we discover how the invention of electric light and the potential for new-fangled electric appliances has created a mania for new gadgets.  One or two of these gadgets have found their way into the operating theatre (the “next room”) of Dr. Givings, who offers the latest treatment for hysteria.  An ancient ailment, hysteria was the common diagnosis for a certain set of symptoms common among women (but also men, as it happens), with treatment traditionally involving a form of massage applied to—in Dr. Giving’s own words—the “womb” area of a woman’s body.   That Givings is providing his patients with “something special” which is utterly unknown to him (or them, for that matter), and Ruhl uses this strange disconnect to full advantage, as she explores the confusion that results when people become addicted to therapy, and find their brains (and lives) more than addled by the results.

…it is a solid play that enlightens us.

Givings’ wife Catherine, a new mother but unable to nurse her own daughter, is clearly a candidate for her husband’s new treatment—but because he regards treating his own wife to be unethical her first therapy session is delivered by one of her husband’s female clients, with very amusing results.  Ruhl exploits all the potential for double-entendre through each therapeutic sequence; but once the laughter dies down she points out how the ecstasy that is unleashed in the “next room” can awaken new and sometimes dangerous thoughts.  New relationships develop among the women who have (ahem) come through Giving’s office, and with the introduction in Act 2 of free-spirited painter Leo Irving (whose therapy session alone is worth the price of admission!) the stage is set for a dizzying waltz of characters in desperate search of themselves.  Ruhl’s dramaturgy is a bit clunky at times—she feels compelled to wrap up the narrative of every single character by the end of the play—but with the final resolution of the Givings’ marital conflicts we find that a script which would have languished in the bottom drawer of an adult film production house has risen to become a truly moving piece about the need for connection, intimacy, and humor. 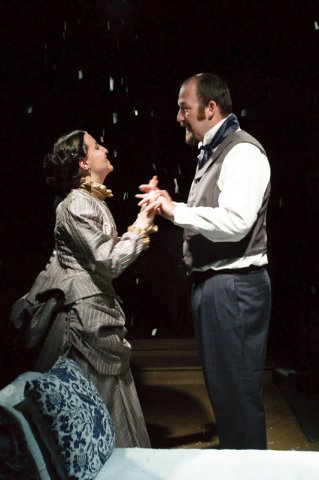 Ben Carr is well cast as the professional and hence deadly dull Givings, supremely ignorant of the effect his treatment has on everyone around him.  As Catherine Givings, the doctor’s long-suffering wife, Lelia TahaBurt does a fine job bringing her many anxieties and dreams to life.  The Daldrys, as played by Mark T. Allen and Erin Leigh Hill, make the perfect, pre-Freudian, repressed couple, unaware of what has been missing in their marriage (and no, not blissfully so).  Paul Valleau, playing the artist Leo Irving, shines; and in his antiquated Romantic-era costume brings to mind the Willoughby of Jane Austen’s “Sense and Sensibility.”

A special mention is in order, too, for Aricia Skidmore-Williams, who does a wonderful job in the understated role of the African-American wet-nurse Elizabeth.  Playing Elizabeth requires tact, because although she is ‘hired help’ and briefly subject to the racist attitudes of those times, her service to the Givings family becomes pivotal in many ways, and she has her own lesson to teach.  In her final monologue Williams gives Elizabeth a quiet intensity that (had Ruhl given it more thought) would have added an even greater depth to the play. The Colonial Players’ stage is cozy and in-the-round, and calls for Spartan settings.  Edd Miller has done a fine job making the most of the space, with its ramps and central playing space divvied up to ensure visual access to all the action.

This production is an evening well spent, and by no means should you let the play’s title or subject steer you wrong; it is a solid play that enlightens us.