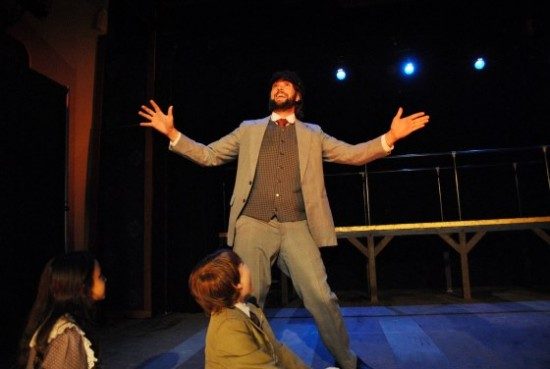 Sure we’ve got a long way to go, but America has made great strides over the past one-hundred years. And I’m guessing the characters in the popular period musical Ragtime would agree. This season, Kensington Arts Theatre breathes new life into Terrence McNally’s resonant, Tony award winning play about race, class, and culture in the early twentieth century.

Based on the novel by E.L. Doctorow, the premise of Ragtime is this; three separate, but not so equal communities struggle to find their footing in an America that is on the brink of change. They may differ by gender, skin color, religion, and class but they are not without unifiers – love, human decency and, of course, the infectious syncopated melody of ragtime music. At the core of the story, Mother (Malinda Markland), must grapple with the changing dynamic within her upper class family.  Tateh (Benjamin Greenfield) must learn how to both protect his daughter and achieve the American dream as a struggling artist and immigrant.  And Coalhouse Walker (Sayne-Kharyi Lewis), an African-American pianist, must somehow survive in a country in which racism is still the norm and the law.  All the while, celebrities, activists, and visionaries of the era not only lend authenticity, but also their wisdom and influence upon a generation of hopeful citizens.

Director Darnell Morris expertly manages this very ambitious production.  Ragtime’s cast is massive, yet Morris does a commendable job keeping track of its many moving parts. Mostly, the nearly two dozen actors move fluidly about the stage despite the limited space. There may have been one or two near collisions during the show’s more crowded musical numbers, but they were hardly noticeable. Consequently, scenic designer Matt Karner wisely opts for a minimalist set.  A raised platform with railings sits high in the background while simple furnishings are quickly moved off and on the stage below. The props themselves befit the era, a time in which many technological advances were still in their infant stages. Coalhouse Walker’s locomotive is an impressive sight, a slim, shining interpretation of one of Henry Ford’s early creations. 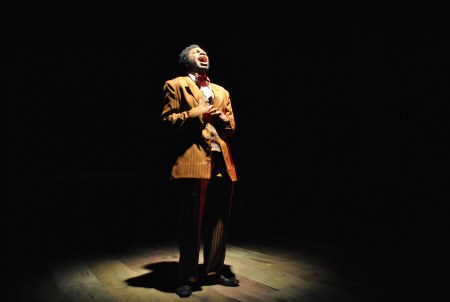 Lighting designer, Ben Levine gives each solo performance its due with lots of moody, intense spotlight.  His work also helps the audience navigate who’s actually talking or singing; there are often dozens of actors on stage. Particularly memorable are the deep, rich, amber hues used to set the tone during “Your Daddy’s Son,” Sarah’s mournful ode to her newborn child.  In addition, Zachary Lasko succeeds at designing the many sounds of Ragtime. As sound designer, he offers plenty of small, emotion-enhancing touches throughout. The ominous drum roll that follows “Coalhouse Demands” comes to mind.  Of course, the musical numbers come courtesy of an extremely talented orchestra led by conductor Mayumi B. Griffie. I’d be first in line to buy a KAT version of this score.

One of the just plain cool things about this production is that the ensemble looks like they are truly having fun up there. The choreography and thirty-one musical numbers make Ragtime a demanding show, but the actors never appear to lose steam. The show’s core trio – Malinda Markland as Mother, Benjamin Greenfield as Tateh and Sayne-Kharyi Lewis as Coalhouse Walker – are dynamic from start to finish. Markland is simply sweet as Mother, a wealthy New Rochelle woman with a strong moral compass. Markland’s demeanor is inviting and soft.  Her voice is at once strong and gentle, particularly during, “Our Children,” a touching duet with Tateh (Greenfield) and also in the nostalgic ballad, “Back to Before.”

Benjamin Greenfield is loveable and charming as Tateh, a Jewish immigrant and father with big dreams. Greenfield embodies the character’s hopeful and often amusing spirit, delivering every line with zeal and a believable accent. Because of Greenfield’s energetic approach to the role, by the time he performs the playful, “Buffalo Nickel, Photoplay Inc.,” Tateh is a character you can’t help but champion.

Sayne-Kharyi Lewis is a force. Though memorable as the hip-thrusting doctor in KAT’s production of Next to Normal, Lewis really flexes his dramatic muscles this time around as Coalhouse Walker.  He transitions from cool and charismatic to enraged and dangerous with ease. Though his character is not without a few unlikeable traits, Lewis portrays Coalhouse with tons of sympathy and affection. Likewise Lewis showcases his warm, velvety vocals in countless musical numbers. His duet with Eben K. Logan, “Sarah Brown Eyes” is intimate and intense.  His rendition of “Make Them Hear You” is one of the most unforgettable performances of the night. 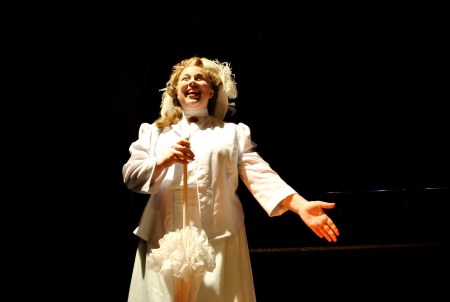 As Sarah, Coalhouse’s forlorn girlfriend, Eben K. Logan is the play’s unquestionable rising star.  Her delivery is poised and controlled. Though donning only a plain brown dress, she exudes an almost regal air. Logan’s performance of “Your Daddy’s Son” is electric. I was brought to tears by her emotional delivery as was the rest of audience who erupted into applause at the song’s end. And if that weren’t enough of a display of her talents, Logan along with Darnell Morris also choreographed the show. That said, my favorite dance numbers are the playful opening scene, “Prologue: Ragtime,” as well as “Henry Ford.” The assembly line choreography was very clever. Also one cannot forget the hilarious tobacco-spitting baseball anthem, “What a game!”

I was also pleased to see Harrison Smith reappear on KAT’s stage as Younger Brother.  In Next to Normal, Smith portrayed an uber-relaxed stoner, a far cry from his family-defying, fighting for what’s right role in Ragtime. But I like Smith as a rebel, even prefer it. His youthful and innocent appearance make the character’s transformation that much more exciting to watch.

Other honorable mentions? Michelle Hill is great comic relief as the cheeky entertainer, Evelyn Nesbit otherwise known as the “Harlot of Babylon.”  Her bubbly performance of “Crime of the Century” is a fun number.  The play’s other historical characters shine as well.  As Booker T. Washington, Montorio Hill is confident and imposing. Bobby Libby is amusingly hyperbolic as the flamboyant magician Harry Houdini. Also memorable is Sharon Alexander as Emma Goldman.  Her raspy and pugnacious delivery during “The Night that Goldman Spoke at Union Square” is a spot-on portrayal of the riot-inciting activist.

If it isn’t already obvious, the KAT’s production of Ragtime is full of unending talent. There really is just so much of it. The stellar vocal talents of the actors and the savvy choices of the crew are why this show is a success.  As Coalhouse Walker describes, Ragtime is an evening of “melodies like bouquets.” And might I add worth seeing with friends and family of all ages, twice.

Ragtime plays at Kensington Arts Theatre, 3710 Mitchell Street, Kensington, MD 20895, through May 25.  Tickets can be got here.