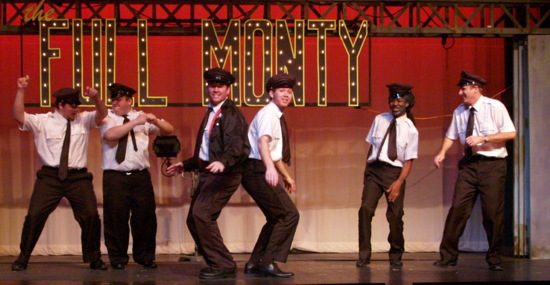 Silhouette Stages’ production of The Full Monty strips bare and shows more of men’s hearts than of their “unmentionables.”  Co-directors Conni Ross and Debbi Mobley have put together a cast that works well together.  I felt their hardships and pain, from their struggling employment situations and relationships  to their lost loves and their determination to make life better for themselves. And, these life lessons are revealed while eliciting laughter every step of the way.

Simon Beaufoy wrote this musical adaptation of the 1997 British motion picture comedy, The Full Monty, with music and lyrics by David Yazbek and book by Terrence McNally.  The stage Monty is a snapshot of the lives of six men and their significant others in late 1980s Buffalo, NY.  These men are dealing with issues that are just as relevant today as they were 30 years ago – unemployment, divorce, obesity and depression. But it is the way these six ordinary men choose to deal with these issues that make Monty funny and even inspiring.

Their courageousness is both ridiculous and sublime, and it is pure theatrical gold.

Jerry Lukowski (Dean Allen Davis) is the main character.  He is unemployed, divorced and behind on his alimony payments. If he doesn’t start paying, he will loose his visitation rights with his teenage son, Nathan (a delightfully believable Jesse Kinstler).  Dean does a wonderful job in portraying Jerry’s sorrow and anxiety at the thought of not being able to see his son and his willingness to do just about anything to not let that happen.  Enter the idea of taking off his clothes for money. 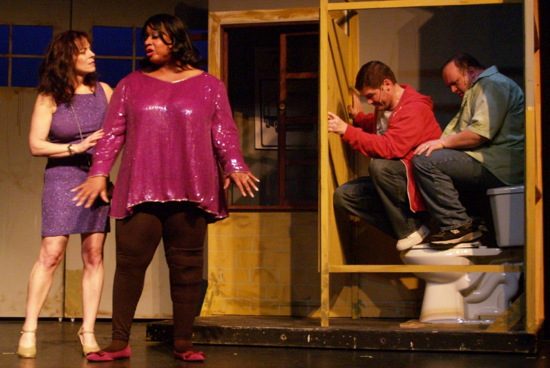 Jerry finds out that a traveling Chippendale dancer makes “tons of money” in one night, so Jerry decides that he, too, could strip for a night and rake in $50,000.  He recruits his best friend, Dave Bukatinsky (Micah Chalmer), who is in even more out-of-shape than Jerry. Dave and Jerry stumble across Malcolm MacGregor (Matthew Acquard) trying to commit suicide and convince him to join them. They then talk their old boss, Harold (Matt Melenas), into teaching them how to dance and helping them hold auditions to choose the other men.

The audition scene is when the play really picks up – we meet Ethan Girard (an adorable John Aquila),  and Noah T. “Horse” Simmons (a wonderful Bobby English).  One of the highlights of this production is when English sings about why his character is called Horse in “Big Black Man.”  When Dave and Harold sing to their wives in “You Rule My World,” in their respective bedrooms, the anguish of their relationships is revealed, and I found myself rooting for these men to do what they needed to do feel better about themselves, even if it meant stripping in front of thousands of strangers. 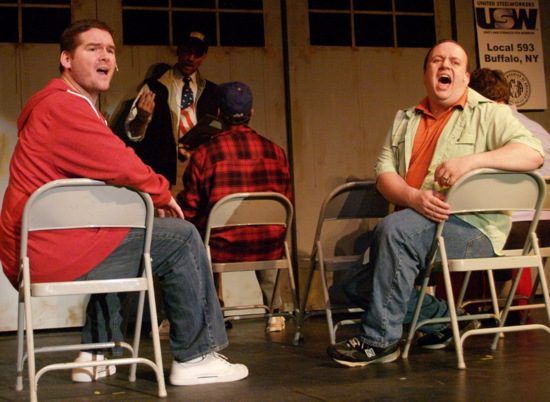 The women in these men’s lives also have some stand-out moments.  In “It’s A Woman’s World,” Dave’s wife, Georgie Bukatinsky (Reenie Campbell) belts out a pseudo-feminist anthem with a voice as clear as a bell.  Georgie and Harold’s wife, Vicki (a solid Beth Cohen), are poignant and loving in their second-act reprise of “You Rule My World.”  Oddly, the woman in Jerry’s life, his ex-wife, Pam (Mary Guay Kramer) has no significant vocal solo, even though she is one of the emotional anchors of the show.  That dramatic choice helps keep the focus on Jerry’s relationship with his son, but it also leaves Kramer frustratingly under-utilized in this production.

The finale of The Full Monty is no surprise, even for those who have not seen the movie.  Yet somehow, when these six characters finally perform their strip-tease, as the group called Hot Metal, the audience cannot help but cheer for them.  Their courageousness is both ridiculous and sublime, and it is pure theatrical gold.