Theatre Review: ‘The Guardsman’ at the Kennedy Center 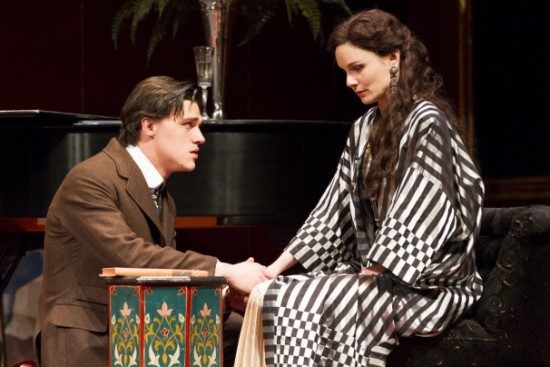 Apparently, The Guardsman, written in 1910 by Hungarian playwright Ferenc Molnár, has long been a favorite of the American summer stock theatres.  Apparently, however, that Guardsman—the American version—bears only a shadowed resemblance to the original Guardsman.  Apparently, that version, like an American sitcom, had stripped the play of its borderline neuroses so as to make it palatable to summer stock audiences.  Apparently, it worked, and Molnár swallowed hard, took the paycheck, and tried not to remember the semi-autobiographical play that once depicted his own tormented summer of love. 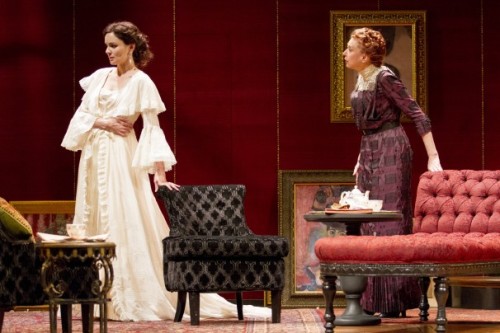 Fortunately, playwright/translator Richard Nelson rediscovered Molnár’s original work, and the Kennedy Center has produced it.  So now this wonderful play, with its deft combination of farce, drama, insight, and romance, can be discovered anew by Washington audiences.

And the Kennedy Center has done itself proud.  Directed by Gregory Mosher, The Guardsman never misses a beat as it skips along its tightrope between farce and drama, delving into the hypnotic world of love’s imagination.  In less capable hands, this play could easily become either a bitter pill or a silly nothing; in Mosher’s hands, it is nothing short of an amazing comedy.

Finn Wittrock and Sarah Wayne Callies play the newlyweds, and their chemistry is superb.  In fact, on the night I saw the production when the young couple finally kissed nearly forty minutes in, an audience member let out with a big cheer, much to the delight of the rest of us.

Mr. Wittrock plays The Actor with an endearing combination of annoying paranoia and puppy dog love.  As the play opens The Actor is accusing his wife of six months of no longer loving him.  Just when you think that his jealous goading can only end badly, with his wife in a self-fulfilling prophetic affair, he turns on the tenderness and keeps us hoping for reconciliation.  Even when he decides to dress up as his wife’s ideal lover, i.e., the guardsman, so as to seduce her, his own wife, we forgive him his naïveté and roar at the absurd possibilities we foresee.

Sarah Wayne Callies, on the other hand, would make any man’s imagination cringe with jealous suspicions and love-sick madness.  Not only does Ms. Callies’ The Actress radiate beauty from the Eisenhower stage but her poker-faced fidelity and pouting pleas to be believed despite our “lying eyes” turn the audience to mush as quickly as they do her poor husband.  Callies plays this most consummate of actresses to perfection, leaving us truly at a loss.  We know no more about what to believe by play’s end than Mr. Finnrock’s Actor knows.  We only know that believing her is the only truly viable option to eternal madness.

The rest of the cast for this production is equally pitch perfect.  Shuler Hensley’s The Critic, and friend to The Actor, plays the compassionate observer with an astute combination of straight-man and critic, knowing when to let the laugh happen and when to offer the slightest advice.  On the other hand, Julie Halston’s “The Mother” is a delightful combination of nag and cheerleader, rooting school girlishly for her surrogate actress-child’s infidelity while chiding the husband’s pain.  The Maid, played by Annie Funke, has the nervous jitters down to a science and a well deserved hoot.  Finally, John Ahlin’s The Creditor and Naomi Jacobson’s The Usher both offer The Guardsman their own moments of humor and good fun. 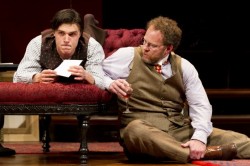 The Kennedy Center’s production team is also first rate.  With scenic design by John Lee Beatty, costume design by Jane Greenwood, and lighting design by Peter Kaczorowski the scenography was transformative, with special kudos to whomever created the floral arrangements—spectacular!  And while I am at it, Ms. Greenwood’s costuming of Callies’ Actress no doubt added to the gorgeousness of her stage presence, particularly that fabulous, flowing black and white robe that shimmered under the lights.

What makes The Guardsman particularly rewarding is not its themes per se—why only two nights before I saw Stoppard’s The Real Thing examine the same very subjects (though Stoppard’s script handles the matter not nearly so well).  What makes Molnár’s The Guardsman so exquisite is the grace and nimbleness of its storytelling.  Using the artifice and imagination of the stage, he sets about to explore the artifice and imagination of love’s madness.  With a craftsman’s delicate touch, Molnár creates an unreal story about a too real-dynamic, and in so doing, delights his audience even as he allows that audience to peer into its own depths.

That synthesis of form and content is the mark of a truly marvelous play, now being performed marvelously at the Kennedy Center’s Eisenhower Theatre.

Running Time: 2 hours and 20 minutes with one intermission.

The Guardsman plays at the Kennedy Center through June 23.  For more information or tickets click here.