“…this production of ‘Twelfth Night’ is a wonder and something not to be missed…a tale as timeless as the laughter it induces.” Robert Michel Oliver, MD Theatre Guide

Synopsis: Cast away on the shores of a distant land, lost lovers and their unruly servants converge and conspire in this romance-filled comedy. 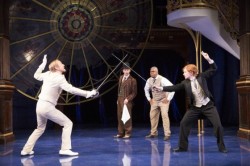 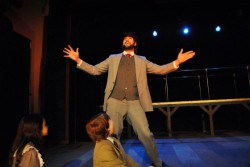 “…a delight for all ages.”  -Elliot Lanes, MD Theatre Guide

Synopsis:  Nate Wright, a detention-riddled sixth grader (and drummer for the greatest garage band in the history of the galaxy, Enslave the Mollusk!) hopes to woo beautiful Jenny away from her boyfriend Artur by winning “The Nickelodeon,” the first prize in his school’s Battle of the Bands. But when Artur and Jenny team up with Nate’s arch-rival Gina to form the sap-pop band, Rainbows and Ponies, he’s gotta take his game to an all-star level. What will he do?

4. Chaplin’s Masterpiece: Modern Times at The Meyerhoff and Strathmore

Following the successes of the BSO’s presentations of The Gold Rush and City Lights, Marin Alsop and the BSO return to pay tribute to Charlie Chaplin. Chaplin’s 1936 film Modern Times is a brilliant, biting satire on the mechanical age. The BSO accompanies this cinematic masterpiece, performing Chaplin’s own original score.

Synopsis: Charlie is a factory worker in this hectic age – a minor cog in the grinding wheels of industry. His job -mechanically tightening bolts on a moving belt. The monotony of the work drives him beserk. Taken to hospital he soon recovers and is discharged, cautioned to avoid excitement.

“It might not help you find your purpose in life, but it will bring you plenty of laughs!” -Mark Beachy, MD Theatre Guide

Synopsis: Avenue Q is a gut-bustingly hilarious modern musical focusing on a group of unique 20-somethings making their way in the big city, seeking their purpose in life. Although the show addresses humorous adult issues, it is similar to a beloved children’s show; a place where puppets are friends, Monsters are good, and life lessons are learned. 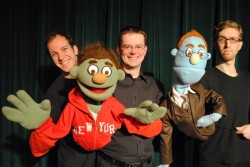