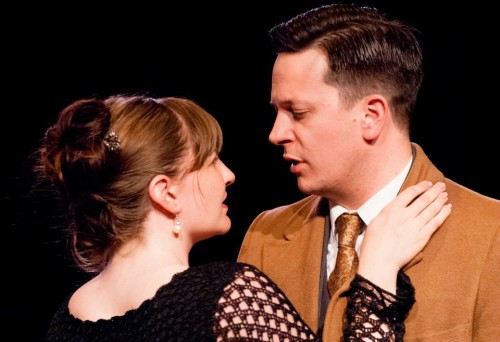 S.N. Behrman’s Biography, currently enjoying an infrequent revival at The American Century Theater, is a depression-era meditation on love, art, and all the intersections of the two.

So go see ‘Biography.’ You won’t be shocked, but you might be moved.

The story centers around Marion (Jennifer Hopkins), a Tennessee girl turned bohemian artist, whose scandalous affairs have garnered more notoriety than her portraits.  The arrival of an imperious young editor, Kurt (Daniel Corey), seems to be the answer to her financial distress, but his offer to publish her biography has serious, political implications for the whirlwind of men caught up in her past. 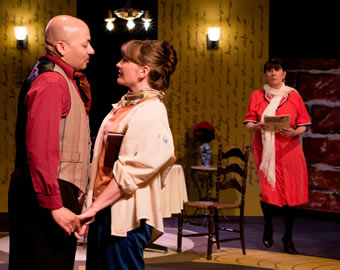 In his program notes, Artistic Director Jack Marshall argues that “Behrman epitomizes the brilliant theatrical talent of the past whose creations are being consigned to underserved oblivion due to no flaw of their own.” On one point, I agree completely; in 1932, Behrman put forth what was undoubtedly a shocking, socially progressive play with a strong female lead.  Now, eighty-one years later, premarital sex isn’t exactly theatrical dynamite, and the underlying, quite genuine love story isn’t quite enough to make this play relevant or cool.  The problem is that, all context aside, Biography is not a masterpiece.  It’s highly quotable—full of the very “epigrams” that Kurt detests—but ultimately feels like Neil Simon without the punch lines or O’Neill without the carnage.

The cast is the best part of this production.  Frank Britton makes a delightful, if brief visit as Hollywood actor Warwick Wilson, Craig Miller finds some clever nuances as the Austrian composer and self-professed ghost Feydak, and Joe Cronin’s Orinn gestures at vices that are probably just the tip of the iceberg.  Senator-to-be (or-not-to-be) Leander “Bunny” Nolan (Jon Townson) is painted a little broadly; at times more accent than character, he nonetheless exposes some heartfelt cracks in his political façade. The marital stakes are oddly low between him and his fiancée, Slade (Caitlyn Conley), but she makes a welcome and well-calculated intrusion into what is at risk of becoming a man’s world. 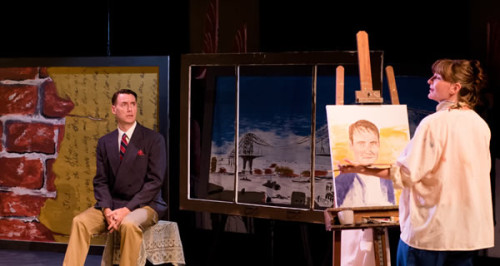 As for the central pair, Jennifer Hopkins takes the lead as Marion—simultaneously frantic and careless, sociable and sincere. She’ll forgot your name (or make one up), but in a charming way.  Hopkins shines most in her interactions with Corey, who absolutely nails his portrayal of a violently disaffected and secretly vulnerable young man.

Robert Echanique’s set comes across as a beautiful, spare idea that grew into a cluttered and distracting mess.  The perimeter of sconce-lit and script-laden flats are the perfect boundary for Marion’s world; it’s everything inside—including a bizarre floor pattern and what appears to be a modern, children’s table—that blemishes the picture. Meanwhile, the onstage portraiture, with no regard for the basic concepts of oil painting, is sadly unconvincing.  Still, excepting a tiresome, door-slamming sound cue, the rest of the design team does well—in particular Alison Johnson, whose elegant costumes give a clear sense of period, character, and status.

It’s a long show, but there’s a lot to enjoy; director Steven Mazzola has gotten some wonderful scene work out of a talented cast. It’s classic American realism, and that, perhaps obviously, is what American Century Theater is all about. So go see Biography. You won’t be shocked, but you might be moved.

Running Time: two hours and foty-five minutes with one intermission.