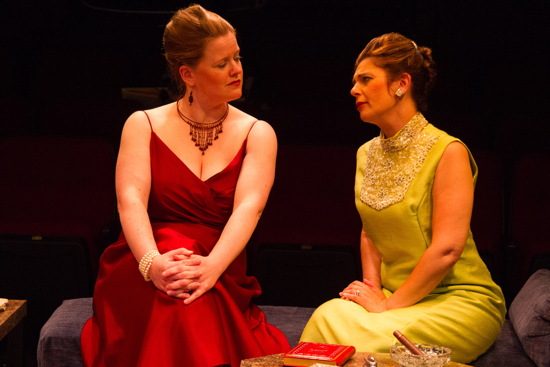 The main advantage of Spotlighters Theatre’s rather unconventional and intimate space is that a family drama like Edward Albee’s A Delicate Balance feels as if it is taking place in your own living room. In this case, the effect is both enlightening and a little debilitating–we are privy to nearly three hours of household drama, punctuated by brief periods of humor, featuring hysterics, the accordion, and an unbelievable amount of drinking.

The 1967 Pulitzer Prize winning play follows a single weekend in the life of Tobias (Steve Avelleyra), his wife Agnes (Cybele Pomeroy), and her sister Claire (Melainie Eifert). Tobias and Agnes receive a visit from their anxiety-ridden friends, Harry (Dan Collins) and Edna (Margaret Condon), in addition to their immature and needy 36-year-old daughter Julia (Joy Baldwin Astle) home fresh from the failure of her fourth marriage. Over the course of the weekend, they all learn the value of friendship, fidelity, and social boundaries.

Despite some line-of-sight issues (from where I was sitting, one of the entrances was entirely obscured by one of Spotlighters’ four main central pillars) set designer Alan Zemla did an excellent job–right down to childhood and high school graduation photos of Astle. The full bar was especially convincing–and necessary, considering the role alcohol plays in this show. The ashtrays, furniture, and wall sconces were all vaguely reminiscent of a grandparent’s living room. 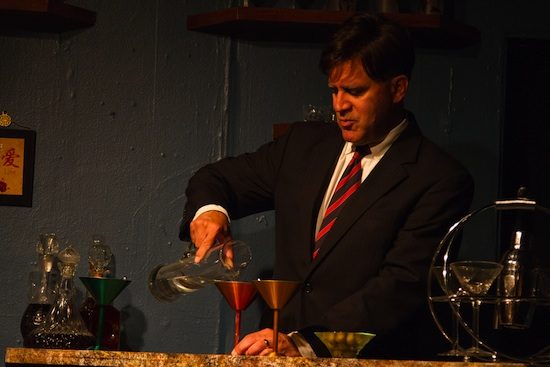 As always Tobias (Steve Avelleyra) attempts to soften all the edges with a drink from over stocked bar.
Photo by Ken Stanek Photography.

The actors did a good job considering that A Delicate Balance is unnecessarily verbose and probably about thirty minutes too long. Eifert’s comedic timing was excellent, and the interaction between her and Pomeroy is extremely realistic. Astle’s performance as the astonishingly immature and furiously energetic Julia was both funny and horrifying in its intensity–but managed to project more animation into the small theatre space than virtually any other actor. The moment when she emerged from upstairs, hair unkempt, waving a pistol around the room, was truly hilarious. Collins and Condon were awkward and disturbing as the friends with absolutely no knowledge of boundaries, accentuating each cringe-worthy antic in sharp contrast to Eifert’s easy humor or Avelleyra’s remarkably accurate drunkenness. Pomeroy’s opening monologues were a bit rushed, and a lack of variation in tone and mannerism made them difficult to follow, but this improved as the play went on.

A Delicate Balance has moments of good writing, and director Fuzz Roark certainly has much to be proud of in this particular production in terms of actor coordination and expression of tone and theme, but its length and subject matter may make it an acquired taste for some. It also features smoking and authentic 1960s derogatory language.

A Delicate Balance runs through June 30, 2013 at Spotlighters Theatre, 817 St. Paul Street, in Baltimore, MD. Tickets can be purchased online at www.spotlighters.org.