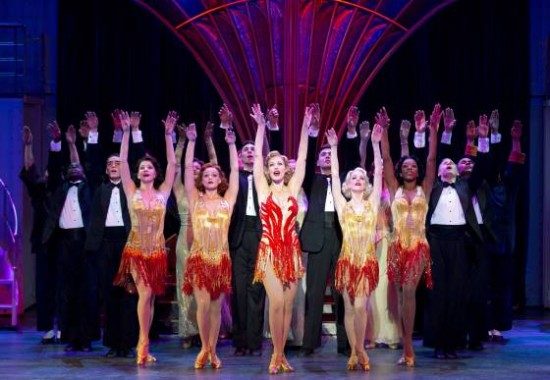 Cast of ‘Anything Goes.’ Photo by Joan Marcus.

Ladies and gentleman, this is your reviewer speaking. Climb aboard a luxury ocean liner for an evening of hit tunes by Cole Porter and award winning choreography by Kathleen Marshall. Your ship is called the Anything Goes and it departs from Kennedy Center’s Opera House. Once onboard be prepared to find mistaken identities, medaling debutante mothers, filthy rich businessmen, gangsters, and a Mae West type singer named Reno Sweeney playing nightly with her angels in the Porter  nightclub of the ship.

…a nice albeit leisurely excursion through a simpler time in musical theatre land.

This ship originally docked on Broadway in 1934 and had a passenger list that included Ethel Merman as its star. It then had a off – Broadway sailing in 1962 with a smaller production. After a long refurbishment process with Timothy Crouse and John Weidman providing a new book, the ship docked at Lincoln Center Theatre in 1987 and enjoyed almost two years of delighting passengers with Patti Lupone and later Leslie Uggams starring. In 2011 Roundabout Theatre Company purchased the ship and set sail with a brand new production full of energy with Sutton Foster and later Stephanie J. Block as Reno and Joel Grey as Moonface Martin. The Roundabout ship is now touring the country with Rachel York as its lead and while I did enjoy some of the musical numbers on this sailing, what was a high speed trip on Broadway is now more of a leisurely cruise across the Atlantic. 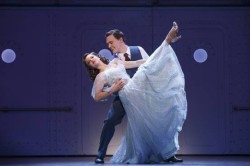 Now let’s get it out of the way that this is still a 1934 musical where the book was never the strong point and the songs were what delighted audiences. There is the filthy rich stockbroker Elisha Whitney (Dennis Kelly),his assistant, Billy Crocker (Josh Franklin) who is in love with Hope Harcourt (Alex Finke), and her mother, Mrs. Evangeline Harcourt (Sandra Shipley) who wants her to marry Lord Evelyn Oakleigh (Edward Staudenmayer).  Then we have the sleezy night club singer Reeno Sweeney (Rachel York) and Moonface Martin (Fred Applegate) who is a gangster masquerading as a minister and is looking to climb up the public enemy list to number one.

Now it is time to get to the features of this ship. Cole Porter’s song list reads like a weekly Billboard chart of hits. A few standouts include the high energy title number with Rachel York belting out Porter’s lyrics as only she can. Equally as exciting is “Blow Gabriel Blow” with York again giving a knockout rendition with the rest of the company giving high powered support.  With “It’s De-lovely” Barton and Finke show their characters love for each other through Porter’s lyrics and Marshall’s choreography. We get to hear them again later on in “All Through the Night” which brings the mood down but not the talents of these two performers.

We cannot forget Porter’s list songs, as they are one of his trademarks. Songs such as “You’re The Top” and “Friendship” are performed here to maximum potential and get very enthusiastic reactions from all of the passengers.

If there is anything wrong with this ship, it is that when the book scenes are happening the energy seems to drop to below sea level. Some of the jokes , particularly the ones delivered by Applegate as Moonface Martin, did not fare as well as they should have and it just seemed to me that the first third of the sailing was like drifting in the middle of the ocean waiting to see land. Once Porter’s stuff kicked in, the cruise became a very enjoyable one, but it does take some time to reach that point.

Then we have the ship’s band made up of 15 players and led by Jay Alger. They provide the swinging musical accompaniment all the way through the sailing. Michael Gibson’s charts from Lincoln Center are utilized with Bill Elliot adding to Gibson’s originals and Dance Arranger David Chase providing new dance music arrangements for this sailing. While I did think the band, as always at Kennedy Center sounded fantastic, it struck me that some of Alger’s tempos lacked the energy from the Broadway sailing of this production. As good as the band sounded it felt like the swing factor could have been more prominent in a few spots than they were. 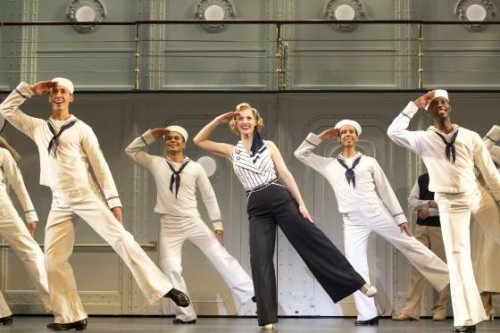 Rachel York and cast of ‘Anything Goes.’ Photo by Joan Marcus.

Derek McLane’s ship design captures the feel of a 1930s ocean liner nicely and the costumes by the late Martin Pakledinaz, adds to the period specific production. This was Pakledinaz’s last production and it is a fitting tribute to a truly great theatrical designer.

It is very easy to see why Kathleen Marshall is so lauded as a choreographer with this production. She has won multiple awards, and with such numbers as the aforementioned title song and “Buddie Beware,” performed by Moonface’s girl Erma (Joyce Chittick), it proves that Marshall is up there with the great choreographers that have come before her. When I boarded this ship in NYC, I found that the direction was slick and fresh. Here for whatever reason it is not. Maybe it’s the size of the venue but for some reason (at least for this passenger) the direction is just missing its sheen and polish.

That being said, this cruise is for the most part a good time. With Cole Porter’s legendary score and a talented bunch of performers, this Anything Goes will offer you a nice albeit leisurely excursion through a simpler time in musical theatre land.

Running Time: Two Hours and 20 minutes with one intermission.