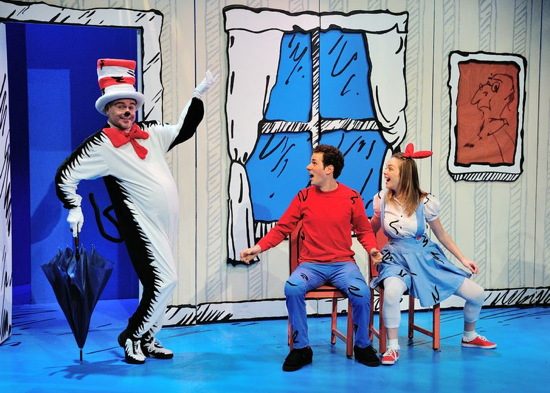 Rick Hammerly as The Cat, Tyler Herman as the Boy, Jessica Shearer as Sally.
Photos by Bruce Douglas.

It’s not often that I walk into a theater and say “Wow!”  That’s exactly what happened when I first saw the stage for Adventure Theatre MTC’s production of Dr. Seuss’s Cat in the Hat.  Set Designer Luciana Stecconi created a stage that is an exact copy from the pages of this classic children’s story.  My daughter walked on the stage and said, “Look mommy, I’m in the book!  I’m in ‘Cat in the Hat’.”  I smiled at her and remained calm, but inside I thought: “This is so cool. I feel like I’m standing in the book too!”

Adventure Theatre, MTC has done it again – ‘Dr. Suess’s Cat in the Hat’ is another supreme production that is an honor to see.

Dr. Seuss’s Cat in the Hat follows the book and begins with Sally and her brother sitting at chairs that face the window.  They are sad and bored because it is too rainy to play outside and there is nothing to do inside.  So, when the doorbell rings, Sally and her brother jump to open the door.  The voice of reason, their pet fish, reminds them that no one is aloud in when their mother is out, but the kids are so bored that they don’t care.  Enter the Cat in the Hat with many solutions to their boredom, all having to do with one mess or another, along with two red friends named Thing One and Thing Two. 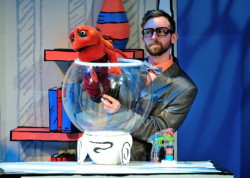 Alex Vernon as The Fish.
Photos by Bruce Douglas.

In the beginning, Sally and her brother have just as much fun as the Cat in the Hat and his two friends do, making messes and ignoring the fish’s warnings: “But as the time ticks away and their mother’s homecoming was coming, they realize that their fish is right, this Cat in the Hat must go soon, running.”

Rick Hammerly plays the Cat in the Hat as an enthusiastic cat that just wants to please but doesn’t care what commotion he brings. Hammerly is a joy to watch, and he pops from the pages just like Thing One (Julia ‘Lulu’ Knowles) and Thing Two (Leah A. Show) with their amazing acrobatic talent.

Jessica Shearer Wilson is Sally, who says very little but carries the show on her physical movements and animated facial expressions alone.  Tyler Herman as Boy, Sally’s brother, also has great physical timing.  The Fish is played by a well-dressed Alex Vernon, who becomes one with the puppet fish he operates with one hand.  Later,  as the calm and collected fish starts to stress about the mess and the cat, the puppet and Vernon start to unravel.  Pieces of Vernon’s nice suit get thrown off and out come his shirttails. 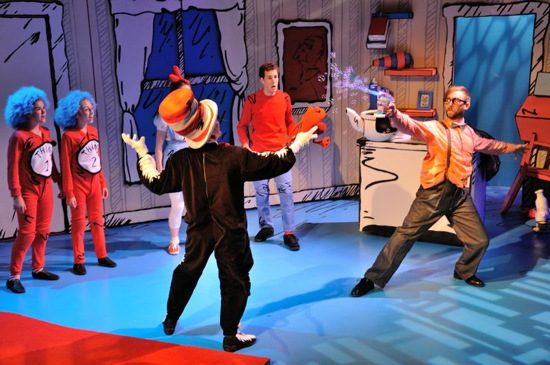 Julia (Lulu) Knowles as Thing 1 and Leah Show as Thing 2, Rick Hammerly as The Cat, Tyler Herman as the Boy, Alex Vernon as The Fish.
Photo by Bruce Douglas.

Director Karin Abromatis was able to capture all the fast-paced action and emotional swings of the book in a quick forty-five minutes.  With all the action on the stage, I found myself smiling and out of breath, like the actors, for most of the show.  The story is moved along with the identifiably smooth voice of National Public Radio’s Guy Raz as the Narrator, and Costume Designer

Kendra Rai designed costumes that were plucked from the book’s pages, right down to the black squiggly pen lines on the costumes.  Just amazing!

Adventure Theatre, MTC has done it again – Dr. Suess’s Cat in the Hat is another supreme production that is an honor to see.