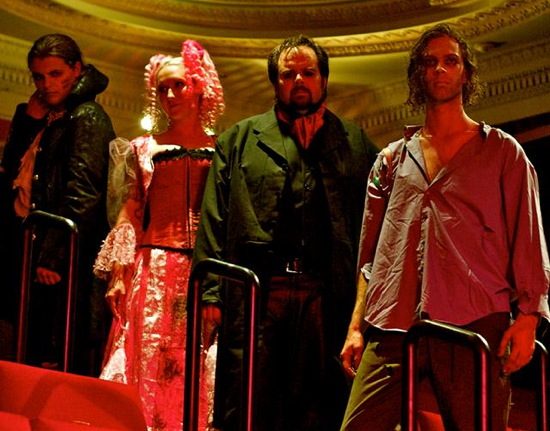 A Gothic-novel-turned-musical is good, but a Gothic-novel-turned-rock-opera is better. Landless Theatre Company’s Frankenstein is atmospheric and exciting, a surprisingly faithful adaptation of Mary Shelley’s original novel. Strong vocal performances overshadow a few minor flaws in design. The lyrics are poetic but passive, but the orchestration adds complexity and dimension to a familiar story.

If you’re looking for mad scientists and angry mobs, this is not the Frankenstein for you. Composer Robert Campbell’s Frankenstein pulls straight from the original novel, although some key characters and subplots are missing. (I admit a bit of personal bias on the subject— I’m a huge fan of the novel— so if I can overlook omissions of original elements, anyone can.) The story doesn’t suffer for the changes, but feels more like a “Highlights of Frankenstein” than a point-by-point adaptation. This version is more personal, taking the obsession-and-revenge angle instead of the more common beware-the-dangers-of-science angle. It’s easy enough to pick apart the story like your high school English teacher taught you, and condemn Frankenstein and his creation for their recklessness, but this production invites you to crack open the characters’ heads and identify with them on a personal level.

…culminates in a dramatic ending that would make any die-hard fan of the novel proud.

The concept behind Frankenstein is strong and cohesive. The show is a “Prog Metal” opera, so don’t expect schmaltzy ballads and quirky group numbers like you might find in any old rock opera. If you’re not familiar with the term “Prog Metal,” think classical, symphonic musical structures combined with electric guitars and synthesizers. For followers of the genre, the music in Frankenstein sounds like Sleepytime Gorilla Museum with a dash of Bauhaus. Not unlike Mary Shelley’s novel, prog metal often treats lofty philosophical concepts like the meaning of life and death as macrocosms of the individual human condition. Experimentation with form speaks to the heart of Frankenstein— a desire to reshape the old into something new. 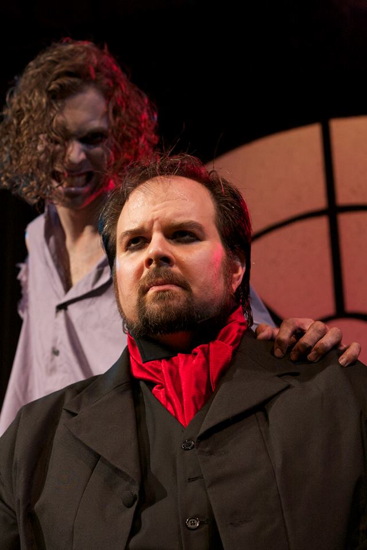 Vocal performances are excellent across the board. Rob Bradley plays the sea-explorer Walton, who opens the show. Bradley has an incredible voice, but his characterization of Walton is inconsistent. He plays Walton with the effeminate genuflections of a glam-rocker, but breaks out into fits of brooding when it seems he’s run out of other ideas. This is due in part to a text that leaves him with not much else to do besides narrate. Andrew Lloyd Baughman plays Victor with a strong voice that fully embodies the character’s range of emotions and passions. Victor is the architect of his own destruction, but Baughman’s grounded physical presence does not betray his descent into madness. It’s hard to believe he spent months in a laboratory, up to his elbows in dead things, suffering for his work.

Irene Jericho plays Victor’s paramour Elizabeth with subtlety and elegance, not at all the simpering ingénue that Elizabeth is in the novel. Devin Gaither plays Victor’s childhood friend Justine, blamed for the murder of Victor’s brother. Gaither is a good physical actor, but the onstage band overpowers her vocals as she pleads her innocence on the gallows. If you are not familiar with her role in the novel, you might lose track of the action.

The scenes between Victor and the Creature are where the production really works. Greg Bowen is magnetic as the Creature, with a physicality that sets the character in a world apart from the others. His face is painted white with dark shadows, more like a skeleton than the unfortunate hulking mass of previous iterations. The Creature’s grotesqueries—so shocking to Victor— are fascinating to watch. Bowen twists his face into sharp angles, grinning as if his skin is stuck that way, exactly the sort of freakishly tall, skeletal Peter Murphy/Nick Cave type you expect from a rock-and-roll horror story.

Frankenstein is strong on concept, but weak in structural execution. The characters often seem disconnected from the action because Campbell’s lyrics are passive and expositional. Much of the lyrical material comes word-for-word from the novel, without translation from prose to dramatic dialogue. The characters rarely interact or want anything from each other. Director Melissa Baughman stages each scene to occur in real time, but the characters are stuck in retrograde, forced to tell us what is happening rather than showing us the action. That being said, the direct quotes work well in the creation scene, as Victor describes the Creature coming to life before him. 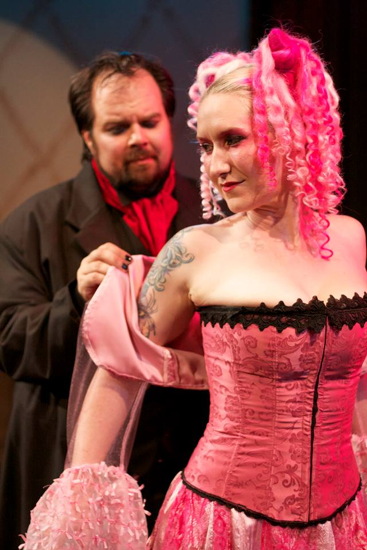 Design concepts are not fully fleshed-out. The scenic design by Jared Davis is minimal, a set of three baclit windows and platforms, more suited to a rock concert than a play with multiple locations. While the justification for this choice is sufficient, the costume design by Elizabeth D. Reeves wavers between period-appropriate attire and an alternative neo-Victorian goth style. Both choices make sense in context, but the design lacks cohesion and does not make the most out of so much theatrical potential. The production also employs shadow puppetry to depict offstage violence and the occasional floating, ominous skull for foreshadowing. The puppeteers’ hands are often visible, and the manipulation of the puppets is clumsy. However, I did see the performance on the last night of previews, so perhaps this technical element is still in a development phase.

Frankenstein is not a show for the masses, with a counter-culture, cult-classic charm that is endearing despite a few structural and design flaws. The production is more like a concept album performed onstage than a living, theatrical story, but culminates in a dramatic ending that would make any die-hard fan of the novel proud.