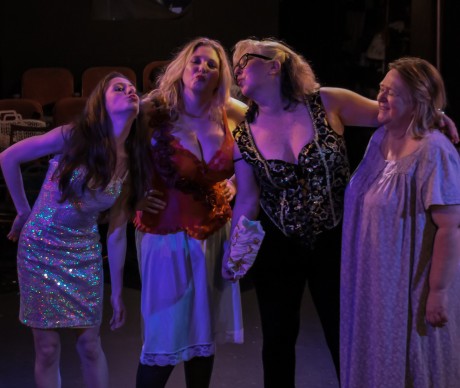 Most families are a little bit complicated, dysfunctional even.  If we’re lucky, things eventually mellow out and folks manage a certain level of civility with one another. But sometimes resentments linger, jealousies build, and childhood sibling rivalries follow us into adulthood. Sure there are a number of healthy and constructive ways to resolve our conflicts. But if you’re anything like the women in playwright Kathleen Warnock’s Grieving for Genevieve you’re more likely to skip the Oprah brand talk therapy and instead scream it out, claw it out, fight it out, Jerry Springer style.

…strong performances by four of Washington’s bravest, most committed actresses.

Venus Theatre, only the second venue to produce Grieving for Genevieve (New York’s WorkShop Theatre was the first in July of 2005), fearlessly approaches this gutsy play about four women struggling to overcome their troubled family history. Old wounds resurface when Genevieve (Karen Costanzi) and her three daughters unceremoniously reunite to help plan middle sister Delilah’s (Ty Hallmark) third wedding. It’s not long before the women start the blame game, tossing insults, accusations, not to mention beer cans and blows – a la a Spike TV cage match. When an unexpected tragedy strikes, the sisters are forced to put their squabbles aside and attempt to resolve maybe not all of their problems, but at least the ones that really count. “Isn’t there a statute of limitations on guilt?” Delilah asks. I don’t know that the play provides a definitive “yes” or “no” answer to that, but rather suggests that perhaps there should be, because after all, life is short, unpredictable and damn hard.

The characters in this play are not exactly a sophisticated or glamorous lot. They curse, smoke, scream, drink, burp, erupt into food fights and, at even the slightest offense, WWE style bouts (expertly choreographed by James Jager). That said all four women fully commit to their characters’ roles within the family’s turmoil and disarray. As Angel, a reluctant nun and the family’s youngest and most passive sister, Kelsey Painter is a petite and quiet presence throughout much of the story. She is largely agreeable in between playful belches and secret smoke breaks making her metamorphosis in act two the play’s most surprising and exciting.

As the title character, Genevieve, Karen Costanzi is the quintessential lower middle class mother and elder.  Dressed in scrubs and a fanny pack, dragging a hand cart of mostly useless sundries, Costanzi is the hoarding mother, grandma, and auntie that exists in every family. Genevieve isn’t a perfect parent by any means, but Costanzi does a good job of portraying her without malice or disdain.  She is simply a woman doing the best she can under extremely imperfect circumstances.  However, I wish that both Costanzi and Painter would have projected just a wee bit more.  A few of their more poignant scenes lose a bit of steam half way through simply because they are difficult to hear even within Venus Theatre’s intimate space. 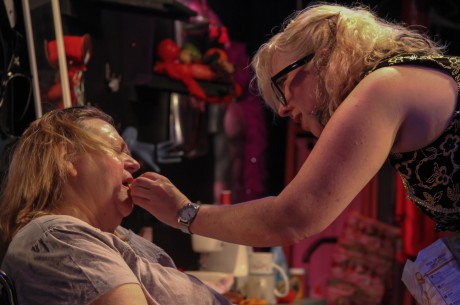 Conversely, there is absolutely nothing quiet about both Ty Hallmark’s and Deborah Randall’s performances as the play’s more audacious and rambunctious characters. Ty Hallmark is courageous, bold, and opinionated as Delilah, the plagued middle sister with as many husbands as she has siblings.  Perhaps the clan’s most ironically responsible sister, Delilah hustles between gigs as a seamstress for exotic dancers and Girl Scout cookie salesman to make ends meet.  Dressed in ripped panty hose, four inch stilettos and cleavage baring corsets, Hallmark is confident and unapologetic in her delivery as loyal sister and daughter.

Likewise, Deborah Randall is impressive as Danni, the eldest midriff baring lesbian sister who copes by keeping her distance from her toxic brethren. Spending much of the performance in a braless tank and underwear, Randall is brave, comfortable, and unapologetic as the sister who could’ve, should’ve, would’ve done more for the family if it weren’t for the painful backstory that sends her character fleeing to New York for some sense of normalcy.  Together Randall and Hallmark have chemistry; they are unrestrained during physical altercations and unabashed as their characters confess their immoralities. At times the yelling and screaming and yelling again is a bit much, but hey, when is a quarrel amongst relatives ever pleasant or comfortable?

Many praises to Set Designer Amy Rhodes.  A character in and of itself, Delilah’s slipshod abode is its own brand of theatrical eye candy. Similar to that of a Takoma Park or Adams Morgan thrift shop, Delilah’s very lived-in home is a collective of miscellaneous memorabilia. It is reminiscent of the character’s former, younger, happier self.  From the dust strewn guitars to the tables littered with beer cans and cigarette butts, the locale is a perfect representation of a family in chaos.  Other nice touches lend authenticity; the picture of The Ramones, the Hamilton and the Harlots poster, the endless exotic dancer costumes strewn everywhere… the end result is appropriately unpolished. Hers is a home in which a family merely thrives not survives.  Similar accolades to Sound Designer Neil McFadden who further lends authenticity between scenes with 90’s era grunge bands such as L7.

Nicely orchestrated by producer and director Deborah Randall, Grieving for Genevieve is a slow-building story with relatable characters no matter your class or lot in life.  Act two does allow for a satisfying personal resolution for each daughter/character.  However the final ending is somewhat abrupt and therefore anticlimactic. Still, this play showcases strong performances by four of Washington’s bravest, most committed actresses. Whether you’re a Georgetown socialite or starving artist, you will identify with one of the women in this play.  And if that weren’t enough, Venus Theatre more than deserves the patronage, for its dogged commitment and obvious talent.