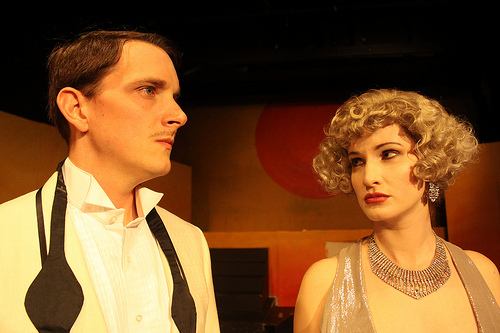 In Medea, now playing at Mobtown Players, an ancient drama is played out amidst the glitz and glamour of 1930s Hollywood. It is the story of a woman driven by rage and indignation, seeking revenge for the destruction of her marriage, who makes a choice no mother should have to make.

Directors Melissa O’Brien, Caitlin Bouxsein, and Tara Cariaso have taken something very old and done something very new with it, and done it extremely well. It is definitely worth watching.

Mobtown’s production is a gorgeous and surprisingly sympathetic rendition of Euripides’ classic tragedy. Most interesting is the setting, and how it colors the lens through which we view the story–the production includes an entire scene done as a short, silent film, with members of the Chorus (Caitlin Bouxsein, Claire Coyle, Abby Grimsley, Evangeline Ridgaway, and Kristine Sloan) sitting in the audience, munching on popcorn and making catty comments about Jason (Brian S. Kraszewski). This altercation between Jason and Medea (Rachael Rash) played out in traditional clothes, with the overacting of classic silent cinema, is so realistic that it immediately validates the setting. 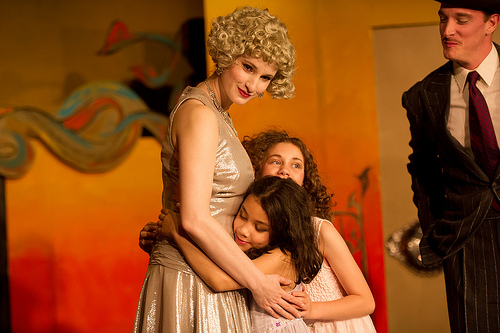 The set design is largely art deco, almost Mediterranean in concept–as with all Greek drama, the convention is that all scenes take place outside, while much of the action takes place offstage (i.e., inside). To this end, the set is basically a courtyard, with a circle of paving stones, and walls painted a sunset red. On the far wall is a poster of Medea, starring in A Flock of Sorrows (the silent film). As the play progresses, the steps below this poster become a sort of altar to the much-maligned eponymous character.

The real scene-stealers of this play are Medea’s children (Amelia and Claudia Henry), ultimately the victims of her rage and impotence. 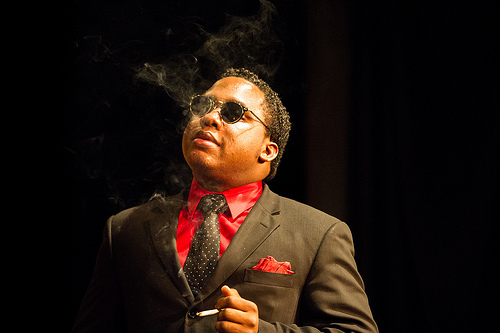 Their heartbreaking innocence as they comfort their weeping mother, their ignorance of their fate, and the absorption with which they play Rock, Paper, Scissors while their mother argues with herself over killing them, lends another emotional dimension to this work. Will Carson, who plays Creon, was the epitome of a threatening mobster, while Griffin Stanbro (Reporter) conducted his role with a sort of perverse delight in narration that added a little laughter to a very unhappy play. Rash herself portrays Medea as a woman defined by her anger and her impotence, left with very few choices in a world to which she does not belong. Ridgaway’s singing of “Tiny Feet” was an unusual interlude, but exceptionally poignant.

Directors Melissa O’Brien, Caitlin Bouxsein, and Tara Cariaso have taken something very old and done something very new with it, and done it extremely well. It is definitely worth watching.