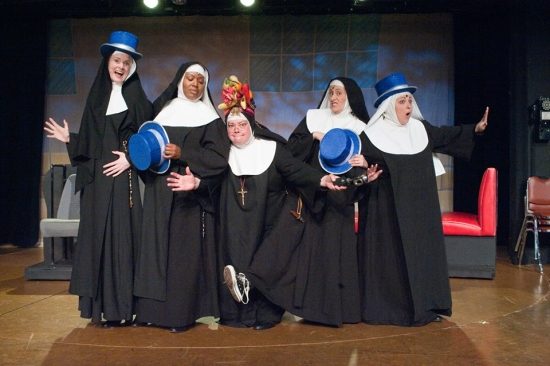 The cast of ‘Nunsense’ at Toby’s Dinner Theatre of Baltimore. Photo by Kirstine Christiansen.

Most of us probably do not know what actually goes on behind the stark, sturdy walls of a traditional convent.  We believe that such an edifice would reflect austerity, include much prayer as well as “proper” behavior among the nuns.  Not so with the Order of the Little Sisters of Dundalk—yes, Dundalk, Md.—whose loopy, hilarious antics take us on an irreverent, non-stop ride,  while good-naturedly spoofing Catholicism and nuns themselves in Nunsense, now playing at Toby’s the Dinner Theatre of Baltimore.

Dan Goggin superbly penned the book, music and lyrics for this farce and as such, Nunsense, which debuted in 1985, became the second longest running off-Broadway show in history behind the Fantasticks.

The production at Toby’s is mostly a madcap combination of vaudeville and slapstick with an ample supply of puns and outstanding music that keeps the audience howling in laughter.  Add to the mix an amazingly talented ensemble under the direction of Mark Minnick and you have one terrific show.

This isn’t a plot-heavy musical but the set-up and storyline is as funny as it is improbable, especially if you consider nuns riding bicycles, donning feathers, and inhaling poppers as improbable.

Five of the  surviving Little Sisters of Dundalk (regional productions tend to localize it), a one-time missionary order that ran a leper colony on an island south of France, discover that their cook, Sister Julia, Child of God, accidentally killed the other fifty-two residents of the convent with her botulism-laden vichyssoise while the quintet was off playing bingo. 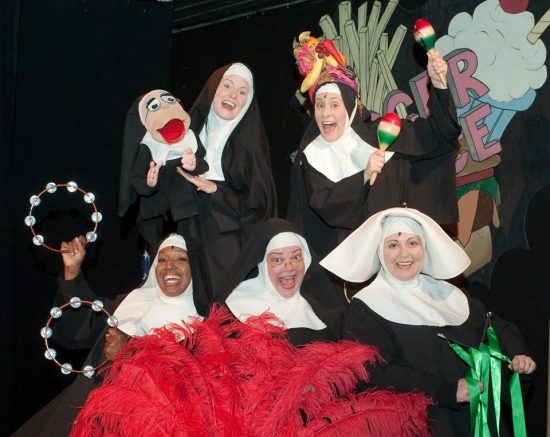 The cast of ‘Nunsense’ at Toby’s Dinner Theatre of Baltimore. Photo by Kirstine Christiansen.

Upon discovering the disaster, Reverend Mother Sister Mary Regina (terrifically played by Jane C. Boyle) had a vision in which she was told to start a greeting card company to raise funds for the burials. The greeting cards were successful and, assuming there was plenty of money, the Reverend Mother miscalculated and purchased a blu-ray player for the convent, leaving her with no money left to pay for the last four burials.

With the deceased nuns in a freezer (“My four girls on ice,” as the Reverend Mother puts it), they decide to put on a variety show to raise the necessary amount.

Involved in this endeavor are Mother Superior Mary Regina, a former tightrope circus performer; her competitive but dignified rival, and Mistress of Novices Sister Mary Hubert (Jesaira Glover); Sister Robert Anne (Heather Marie Beck), a “streetwise” nun from Brooklyn; Sister Mary Leo (Celia Blitzer who also is the costume designer), a novice who is determined to be the world’s first ballerina nun; and clueless Sister Mary Amnesia (Elizabeth Rayca), who lost her memory when a crucifix fell on her head but somehow learned ventriloquism at the convent and performed with her hand-puppet Sister Mary Annette.  Get it?

The five performers all excelled, and unquestionably they were having as much joy as the audience.  They were funny and punny with more ham doled out than a church breakfast.   They execute crazy dance routines and frequently interact with the audience to include an audience quiz sans rulers across the knuckles for a wrong answer.

And can they ever sing!  Under the superb musical direction of Pamela Wilt, the ensemble took Goggin’s score and lyrics to a higher place.  Flawless as a group, scintillating as solos or duets, the magical voices of the performers are like a miracle.

Elizabeth Rayca’s high soprano, pitch-perfect voice soars, and her comedic soliloquies leave the audience in hysterics.  Jane C. Boyle, who played Golde in Toby’s Columbia recent presentation of Fiddler on the Roof, is outstanding in her vocals and comedic skills and a commanding presence on stage.  And Jesaira Glover, who also keeps the comedy on track can truly belt them out.

Numbers in the first act, such as  “Benedicite,” performed by Celia Blitzer, “Playing Second Fiddle” (Heather Marie Beck), “Taking Responsibility,” “So You Want to be a Nun” (Elizabeth Rayca), “A Word from the Reverend Mother,” and “Turn Up the Spotlight” (Jane C. Boyle) are standouts.

The second act features notable songs including “A Minor Catastrophe” performed by the ensemble, “Just a Coupl’a Sisters” (Boyle and Jesaira Glover),  “I Just Want to be a Star” (Beck), and the fantastic, rousing finale “Holier Than Thou” performed by the cast.

One of the cleverer moments occurred when a movie featuring heroic nuns in film was shown.  It started off with The Sound of Music.  Okay, that’s a good one.  But then through the magic of editing, the documentary devolved by inserting nuns in such classics as Psycho, Star Wars and Jaws.

That’s the kind of show Nunsense is and it is a must-see.  It blends goofy comedy with toe-stomping, hand-clapping, perfectly delivered songs and it never takes itself seriously at any point.  It’s not the type of behavior nuns would ordinarily partake in, but some might wish they do.

Running Time: Approximately Two hours and 15 minutes with an intermission.

Nunsense runs through July 14 at Toby’s Dinner Theatre of Baltimore.  Tickets are available by calling the Box Office at 410-649-1660 or visiting tobysdinnertheatre.com.