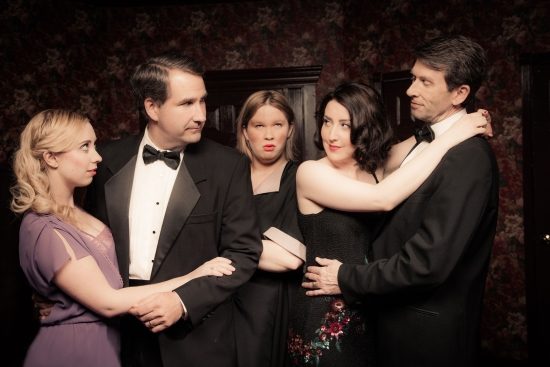 Private Lives by Noel Coward, now playing at Vagabond Players, is over eighty years old but no less funny or relevant than when it first premiered in 1930. It tells the story of Elyot (Michael P. Sullivan) and Amanda (Ann Turiano), a divorced couple who discover that they are both honeymooning with their new spouses (Rachel Holmes and Darren McDonnell respectively) in the same hotel. Memories of their tempestuous life together and the love that created it lead the two to escape their new marriages in favor of a sinful existence in Amanda’s Paris flat. Unfortunately, it is there that Amanda and Elyot relive the very reasons they got divorced in the first place.

Private Lives is a play that revels in its display of love, beauty and human frailty, and this production, in that respect, is downright fantastic. Right from the moment Ann Turiano emerges onto the hotel terrace in a bath towel and cherry red lipstick, looking rather like a less innocent Mary Pickford, we are thrown into the art deco world of the early 1930s in all its fabulous glory. The men of the production are dressed in suits, while Holmes’s pink dresses are in stark contrast to Turiano’s dark elegance. 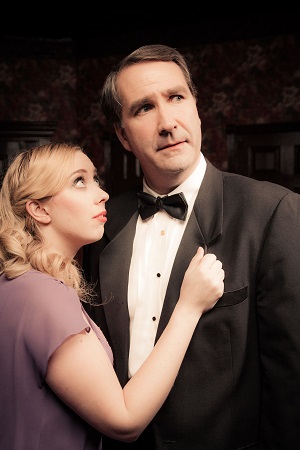 The characters drink cocktails from champagne coupes, sitting at small cafe tables amidst the potted plants, ivy, and ornate bronze designs of the French hotel terrace. In the second and third acts, the terrace is transformed into Amanda’s chic Paris apartment, complete with Damask upholstery, Tiffany-esque stained-glass panes over the doorways, and a small baby grand piano. In essence, costume designer James J. Fasching and set designers Sherrionne Brown and Roy Hammond have perfectly created a world long past in all its alluring elegance.

While I was initially apprehensive of director Sherrionne Brown’s choice to do the play with the characters having British accents, the subject matter and humor are so explicitly English that anything else might have fallen flat. The actors (excepting Stephy Miller, whose character Louise speaks exclusively in French) perfected the particular Received Pronunciation of Britain’s leisure class and aristocracy, an accent specific to graduates of England’s great private institutions like Eton, Harrow, and Rugby.

While the focus of the piece is on the two leads, Holmes’s portrayal of young innocence and McDonnell’s rather campy and ineffectual demeanor provide a good deal of humor–especially when, in the midst of a fight, Elyot and Amanda knock open the doors to find their respective spouses standing there in total shock.