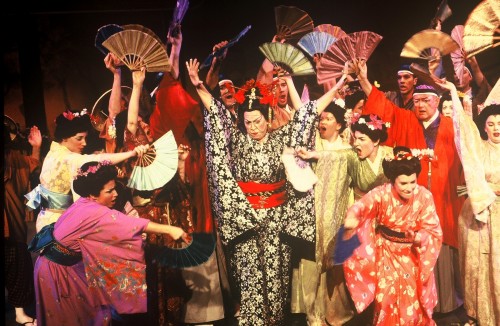 The cast of ‘Mikado.’ Photo courtesy of Wolf Trap.

For those of a certain age (and you know who you are), grade-school productions of Gilbert & Sullivan’s The Mikado were a rite of passage.  Girls donned their mom’s bathrobe and a little makeup, stuck a pair of chopsticks in their hair and a cheap bamboo fan in their hands, and voilà—they were ready for primetime with their “Three Little Maids From School Are We.”   Boys, themselves in bathrobes the size of Moby Dick, took turns trying to stretch their eyelids in front of the mirror and only under great duress yielded to their mom’s supply of liner.  The story made as much sense as Dr. Seuss, everybody laughed, and it was surprising to hear that it was so old.

Even if you don’t care to relive those glory days, rest assured that the goofiness and mayhem of the world’s most-produced musical live on.  The New York Gilbert & Sulllivan Players’ production of The Mikado, here at Wolf Trap for an all-too-brief run, is deliciously funny and channels as much Vaudeville as it does London’s West End.   Directors Albert Bergeret and David Auxier have not only captured the show’s anarchic spirit, but have managed the balance between art and satire quite nicely. 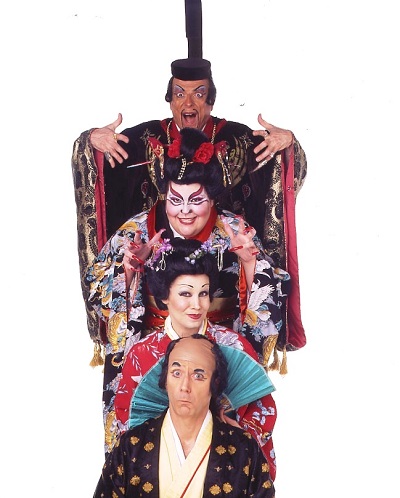 Led by Daniel Greenwood, who puts in a brilliant, charismatic turn as our hero the “wandering minstrel,” Nanki-Poo, the cast gives Sullivan’s wonderful musical settings their due, but still finds ample time to indulge in stage antics that would do Charlie Chaplin proud.  David Macaluso pulls out all the stops as our hero’s nemesis, Ko-Ko the Lord  High Executioner, who has designs on Nanki-Poo’s lady-love Yum-Yum (played engagingly by Sarah Caldwell Smith).   Louis Dall’Ava, meanwhile, brings down the house as the imperious and impossibly rotund Pooh-Bah, whose job titles span the galaxy or so it seems.   David Auxier not only distinguishes himself as the show’s co-director, but he also provides some lanky, Fu-Manchu-ed comic relief as the local noble Pish-Tush.  Friday night saw Quinto Ott take a masterful turn as the Mikado, while Cáitlín Burke brought down the house as the Mikado’s conniving, evil “Daughter-in-law Elect,” Katisha.

Now at this point, dutiful critic that I am, I’m supposed to give you some idea of the plot; but face it, with a romantic hero named Nanki-Poo and a heroine known as “Yum-Yum, ward of Ko-Ko,” what’s the point?  It’s your basic boy-meets-girl, boy-meets-executioner, executioner-marries-witch-on-steroids, you know, the same old same old.  And yeah, everybody still runs around in fancy bathrobes, brandishing fans it turns out you can do almost anything with, except fan yourself.  But amid all the silliness and slapstick there is still some gorgeous music, arguably composer Arthur Sullivan’s best work, with his beautifully melodic oboe accompaniment and a gorgeous, densely harmonic madrigal (“Brightly Dawns Our Wedding Day”) thrown in for good measure.

What makes this production such delicious fun is that Bergeret & co. have updated Gilbert’s sometimes notorious lyrics; in number after number, the troupe skewers just about every jerk in government and media alike; this is especially gratifying, given the prominent news of the week, and it was great to know that Bergeret was an equal-opportunity destroyer of Washington egos.  This kind of updating may offend the purists but truth be known our eminent Victorians, Gilbert & Sullivan, were always in the business of social and political satire.  They knew, as did their audiences that the Japanese setting, ridiculously-named characters and even more ridiculous plotline were the best means of skewering the Empire and its so-called authority figures.  For all its sublime music and catchy hit tunes, it was the words that scandalized London and infuriated ‘She Who Was Not Amused.’  Consider that thanks to his biting, sarcastic wit, William S. Gilbert wasn’t knighted until decades after Sullivan, and literally over Queen Victoria’s dead body (her playboy son, King George V, did the deed). 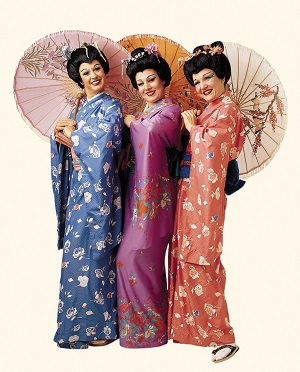 Albère’s setting is a gorgeous collage of Japanese motifs—true to the original production in the 1880’s, there is a marked fidelity to Japanese art and architecture, and Gail J. Wofford and Kayko Nakamura complement the scenic design with some truly gorgeous, elaborate costumes.  Brian Presti worked wonders with his lighting, and was perhaps at his best with Yum Yum’s famous solo, “The Sun, Whose Rays Are All Ablaze.”

Not to be upstaged, Bergeret saw to it that the pit orchestra—which he directed—had its moment in the sun, making clever use of Wolf Trap’s stage elevator to put the musicians on full display for the Overture.  He even encourages the cast to interact with his ensemble down below, and at one point shamelessly bribed Dall’Ava’s Pooh-Bah to let him get on with the show.

Which leads me to one of two major complaints:  given the prominence and talent displayed by the orchestra I find it positively criminal that their names don’t appear in the program.  Why is it that the program has room to list the office staff, the donors, etc., but can’t be bothered to mention a single one of these vital performers?  Does the program exist to glorify everyone except the musicians?  Perhaps I’m biased, coming as I do from a musical family; but it would behoove Bergeret and the Wolf Trap brass to recognize the artistic achievement of the men and women in black; without them, there’s no point to coming.

Now, on the subject of the venue, comes my second complaint and this one I will address directly to Wolf Trap’s executive officers:  the seating plan for the orchestra is an absolute nightmare, an insult and a threat to the safety of all patrons of the arts.  You have scores of seats in each row, but your refusal to provide central aisles (which Wolf Trap used to have) forces us to walk half a mile to our seats, stepping gingerly back and forth, over and around the toes of our neighbors, many of whom are elderly and in no position to rise and sit for every passer-by.   Although I am sure you have taken many precautions to prevent a repeat of the fire that destroyed the Filene Center a few years ago, even the slightest mishap or mis-placed spark on stage will create a panic that your current seating plan simply cannot handle.  If there is any emergency in the stage area or—heaven forbid—the grid overhead, your highest-paying customers will be trapped and trampled, and brutally so.  For the sake of your liability insurance, if not for the sake of your customers, you must bring back the aisles that allow us the freedom of movement we take for granted at every other venue in town.