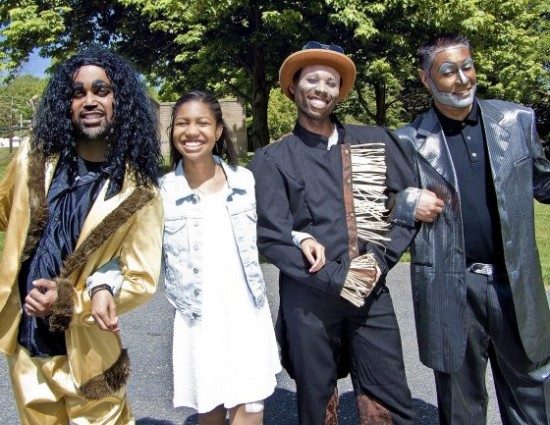 Although it has often been seen as a vehicle for pop stars, The Wiz has always had the potential to touch audiences and offer some solid life-lessons.    It may be fun to watch Michael Jackson as the Scarecrow or Richard Pryor as the Wizard, but the star-power of movie and Broadway versions can blind us to the very real concerns of the musical’s original creators.  It’s great to see that Rikki Howie, the Director of Tantallon Player’s production, created a show that finds the warm heart of the original.

Howie asks you to see Dorothy’s journey as “a glimpse of your own personal journey” and reminds us that the characters and the challenges they face all have their counterparts in our own lives.   The stage of Harmony Hall is filled with one big, beautiful theatrical family, grade-schoolers on up, to tell the story.  In keeping with her emphasis on family, Howie has cast talented young actress Nia Smith as her Dorothy; Ms. Smith demonstrates that it’s more effective to have a child in this pivotal role, because in the end L Frank Baum’s novels and the shows they have inspired are more about the journey of the heart.

The stage, designed by Leslie Ann Kekuewa, has a modern techno-feel to it, with huge gears and walls of colored lights coordinated to highlight the show’s many moods.  Levar Betts’ musical ensemble, split into two banks of performers, occupies a prominent place; the instrumentalists are of course a huge part of the show themselves, and Steven Garrison deserves kudos for a nice sax solo early on. 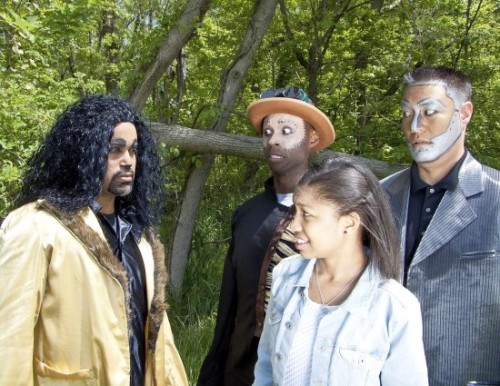 Given the flavor of the music, it’s no surprise that one of the joys of this production is Taurean Maray Barber’s choreography, which like the music covers the territory from the 60’s on down.  All the classic moves we know and love are there, and then some.  Naturally, the performers would love to hear compliments about their singing—but face it, there’s nothing like the sight of Zadoc-Lee Kekuewa’s Tin Man working out his not-so-creaky joints, or Carl William’s brilliant moves as the Winged Monkey.

The show has some gorgeous numbers, of course, and the musical talent shines here throughout the show, from Nia Smith’s Aunt Em (“The Feeling We Once Had …”) to the trio of Dorothy’s road crew, Sedrick Moody (Scarecrow), Zadoc-Lee Kekuewa (Tin Man) and Keith Alexander (Lion).  Kourtney Sullivan rounds out the show beautifully as Glinda, the Good Witch, guiding Dorothy on the last steps (and clicks) to her return home.

Outfitting the cast for a big production like this can be a real challenge, but Anya Randall Nebel (costumes) and Shemika Berry (Hair & Makeup) have a blast, turning Shar-Nay Gaston into an unforgettably pink Addaperle, from her curly wig down to her tacky socks and platform shoes.  And Amy Mack, as the wicked witch Evilene, has great fun with her leather threads.

Perhaps the biggest surprise (spoiler alert) is when we finally arrive at the City-Formerly-Known-As-Emerald (the Wiz keeps changing his mind about color schemes).  Here we find a mild-mannered, geeky dot-com wannabe (Jonathan Cagle-Mulberg) who like Dorothy seems to be in the middle of his own journey.  All the bravado and posturing, it turns out, masks someone who still hasn’t found his home either.

Tantallon’s The Wiz is great family entertainment, by families for families.  And as Ms. Howie announced during a pre-show talk, they will be gearing up for another kid-friendly show in the 2013-2014 season.  Be sure to get your wee ones out to audition for “Annie” next year!  (And a quick note to the guys in the booth:  watch those sound levels – the volume was way too high, and you don’t want to blast us out of the theatre!)