Theatre Review: ‘Twentieth Century’ at the Little Theatre of Alexandria 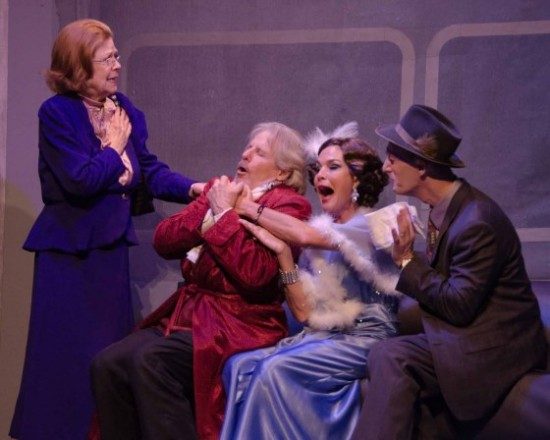 The Little Theatre of Alexandria produced its first play in 1935, only three years after Twentieth Century opened on Broadway, and a year after the hit show made it to Hollywood.  Even though the film was a failure at the Box Office, the Library of Congress’s National Film Registry recognized it for establishing “the essential ingredients of the screwball [comedy]– a dizzy dame, a charming but befuddled hero, dazzling dialogue and a dash of slapstick.”

a strong ensemble of players

Ken Ludwig’s adaptation of Twentieth Century bears only a slight resemblance to the original play—as he reduces a cast of 25 to 12—or to the movie–as this production expands a 91-minute film to a 2-hour play.  Nevertheless, enough of the history is retained, and enough of the dialogue refreshed, to make the Little Theatre’s production of Twentieth Century an enjoyable even if overlong theatrical event. 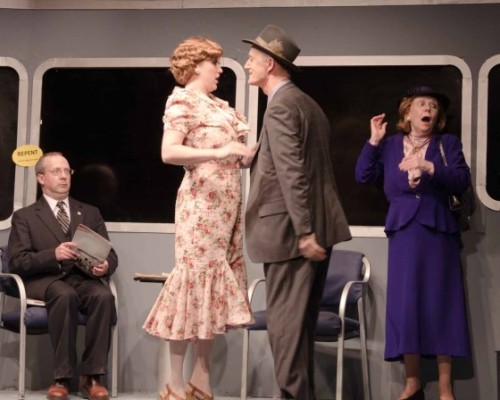 The story is simple enough.  Theatrical director Oscar Jaffe, based on none other than America’s most famous theatrical impresario David Belasco, has lost his leading lady, Lily Garland, and with it his ability to produce a successful piece of theatre.  On board the Twentieth Century Limited train from Chicago to New York, Jaffe has 18 hours to win her back and sign her up: despite the fact that Lily, now a successful movie actress with one of those statues “not yet named Oscar,” despises him.

Long time LTA member Roland Branford Gomez takes the reigns of this production, and for the most part keeps the show moving forward, almost as delightfully as the production’s passenger car set, chug-a-luggingly designed and constructed by John Downing.  Director Gomez frames the production with an amusing parade of passengers, first onto the train, and then off into the wilds of New York City.

Lead actor David James—a talented actor to be sure— tackles the role of egoist Oscar Jaffe with flare and much bravado.  Unfortunately, he also frequently over plays the part, sometimes turning every line into a full length play.  As a result, by my estimation he adds an additional 15 minutes to a script whose want of comic business cannot afford the fat.

This is not to say, however, that theatrical ego and long windedness are not themes embedded in the script.  Actress Margaret Bush navigates the distinction between theatrical phoniness and genuine human feelings with far greater comic effect as her Lily Garland enthralls the audience with her multidimensional, yet farcical screwball.  Costume designers Jean Schlichting and Kit Sibley also do a wonderful job keeping the famous star looking fashionably bright.

The supporting cast of Twentieth Century does a solid job.  Jaffe’s two assistants, Ida Web (Kathy Fannon) and Owen O’Malley (James McDaniel) look as if they could have been plucked right off the silver screen.  Their characterizations are not only spot on; they are also dynamic and believable, as is Cal Whithurst’s Conductor. 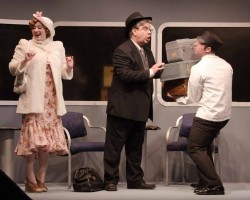 Michael Gerwin and Heather Norcross play Dr. Grover Lockwood and his mistress, Anita Highland, as they escape Chicago and Lockwood’s wife for a fling in New York City.  Ms. Norcross captures the essence of “screwball” perfectly as her dizzy blonde seems always bedazzled and shrieking with confusion.

Perhaps the zaniest character in the show is the religious zealot created by Gary Cramer.  A former corporation president and recent escapee from the sanatorium, his Matthew Clark bebops around the stage slapping “REPENT” stickers on everything he sees, even at one point sticking one on poor Miss Highland’s unsuspecting bottom.  I’m not certain how the modern day religious community would respond to this loony fundamentalist, but as an example of farce he is an exclamation point.

The rest of the cast each has their moment to shine.  Timothy Rowe turns in a solid performance as Ms. Garland’s lover and manager George Smith.  Bob Cohen handles his dual roles with distinction: both Max Jacobs (Jaffe’s theatrical competition) and the Toledo detective out to bring Mr. Clark back to the asylum.  Paul Tamney turns in a fun German passion play actor of Jesus himself, while Ben Norcross handles the porter’s role like a pro.

One should have no doubt that the Little Theatre of Alexandria knows how to produce a good show.  Twentieth Century has solid production values, from the previously mentioned set and costumes to well designed lights by Ken and Patti Crowley and sound by David Correia.  They also have put together a strong ensemble of players, each more than capable of taking on a character and making it fly.  In addition, they have a dedicated audience who filled the auditorium for Sunday’s matinee.

I only wish the material that adaptor Ken Ludwig has offered his 21st century audience were stronger, with a few more clever plot twists and a tad fewer awkward scratch-your-head/impossible-to-reconcile moments of action.  Perhaps, if Mr. Ludwig had taken a cue or two from a 1930s playbook, when even screwball comedies made simple dramatic sense, his adaptation would have evoked a lot more laughs and an even more satisfying conclusion.