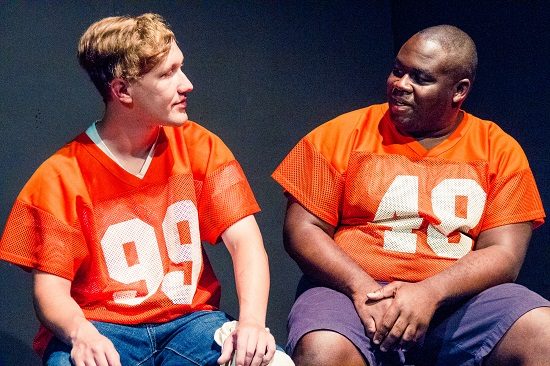 In The Rainbow Plays, under the strong direction of Lisa Davidson who is making her Baltimore directing debut, six distinct mini-plays, each about 10 minutes long representing the different themes contained in the rainbow or gay pride flag are presented.  A seventh play attempts to sum it all up with a humorous, clever, rap-dominated performance.  As in the case of that flag, The Rainbow Plays consist of a tapestry of discrete stories, with the only common thread woven throughout is that they are gay- or lesbian-related.

…the overall experience was enjoyable, interesting and entertaining, and clearly the performances by the ensemble cast with the guiding hand of Ms. Davidson contributed to the success.

The rainbow flag, which originally had eight colors and now contains six, was designed by the artist Gilbert Baker in 1978 as a positive alternative to the pink triangle used by the Nazis to identify homosexuals.  Some theorize he was inspired by the death of Judy Garland of “Over the Rainbow” fame—an iconic gay anthem—which occurred just a few days before the Stonewall uprisings in June 1969.  Mr. Baker recently told a Chicago television station: “The rainbow came to mind almost instantly as an obvious expression of diversity and acceptance.”

Regardless of its origin, the current version consists of six horizontal stripes, each of which was assigned a symbolic meaning by Mr. Baker: red (life), orange (healing), yellow (sunshine), green (nature), blue (harmony) and purple (spirit).

With impressive writing skill, Mr. Espey crafted individual unrelated scenes and plots for each of the plays, integrating the rainbow’s themes.  In such a small window, the playwright had to immediately get to the point and set up the action and keep the plots cohesive.  He largely succeeded.  To transition to each new play, the stage is darkened, a new set consisting of simple pieces of furniture is brought out, and off-stage music is played.

In The Last Blackberries of Summer, Menika (Vanessa Lee) tries to convince Leah (Kelly Cavanaugh) that having a baby (red/life) is what’s needed to strengthen their relationship.  A friend, Annamarie (Grace Yeon), gave the couple a preview of what having an infant was like. Ms. Lee and Ms. Cavanugh were particularly strong.

In Hoya Saxa, David (Rasheed Green) attempts to treat an injury he caused to Poss (Steve Ferguson) during a football game (orange/healing). In the process David seeks to figure out if Poss, a Christian, could possibly be gay.  The word “panache” plays a significant role in the plot.  Both actors performed well; Mr. Ferguson projected his voice with great skill.

Marta (Vanessa Lee) struggles to convince Cyn (Amy Miller) to go through with their very public wedding in a particularly homophobic Tennessee town and endure the “direct threats” in Choreography of Cyn and Marta (yellow/sunshine).  There was good chemistry between these fine two actors including a tender dance, and a nice use of flashbacks enhances the plot.

In Bang Day Maria (Jennifer Hasselbusch) is conflicted by her boyfriend Luke’s (Jared Jiacinto) and her girlfriend Rain (Kelly Cavanaugh) and their differing opinions on Evolution vs. Creationism (green/nature).   The actors provided the right amount of intensity in this play. The best of the group was the riveting Messages Deleted.  Sam (Jared Jiacinto) had been killed in an auto accident.  While visiting his late lover’s apartment to regain some of his possessions, Mark (Steve Ferguson) was maintaining a conversation with the ghost of Sam when the victim’s father, Gene (Rodney Bonds) entered and wanted to know who Mark was and why was he there.  What ensued (blue/harmony) was drama at its best, and I can see this 10-minute offering expanded to a full-length play.  All three actors excelled.

Catch of the Day is about two women and flirtation–Kelly (Jennifer Hasselbusch and Chuck (Kelly Cavanaugh) as well as a fantasy Mr. Fugu (Amy Miller).  This play contained lighthearted humor and playfulness (purple/spirit) and wondering if Chuck would ever eat the potentially poisonous fugu (blowfish).

The final play Zoo Story 2.0 as Bob (Rasheed Green) and Buttercup (Steve Ferguson), two male penguins, struggle to love freely in the Central Park Zoo.  While they attempt to raise a family, they have to overcome the homophobia by humans and succeed in doing so.

The Rainbow Plays is distinguished by its subtlety and humanity with little affection or kissing overtly displayed.  The characters are at critical junctures of their lives and are seeking what everyone wants, except these people happen to be gay.  As Buttercup, the penguin, sums it up in the concluding line of the final play, “Don’t let anyone change you.  Live your life with pride.”

Some of the plays were humorous, others were more dramatic.  Stereotypes were evident in a few but not in others.  Most of the plays worked, some didn’t.  But the overall experience was enjoyable, interesting and entertaining, and clearly the performances by the ensemble cast with the guiding hand of Ms. Davidson contributed to the success.

Advisory: The plays contain adult themes and some profanity and are not recommended for children.