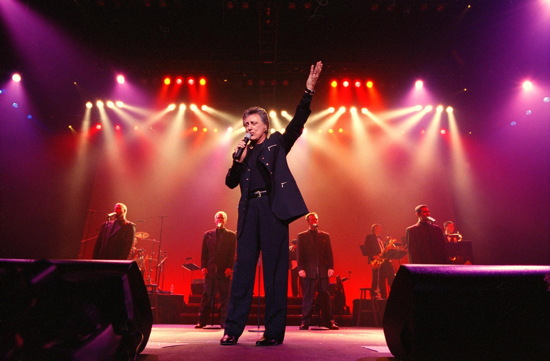 “How do you review Frankie Valli? He’s a legend.”

This daunting question was posed to me by Joseph Leo Bwarie, the young actor who played “Frankie Valli” for nearly five years on the First National Tour of Jersey Boys (and soon to be making his Broadway debut in the role). The tour made two stops at DC’s National Theatre in 2009 and 2011 to rave reviews. The 2006 Tony-award winning musical based on the life of Frankie Valli & The Four Seasons continues to be wildly successful with a second tour, companies performing all over the world, and a permanent company in Las Vegas. It is now the 17th longest running show on Broadway. The soundtrack recording won a Grammy. And finally, the musical will soon be a feature film directed by another icon, actor/director Clint Eastwood. While Jersey Boys reintroduced a whole new generation to Frankie Valli, the truth is he never went away.

The music of Frankie Valli & The Four Seasons has been the soundtrack to the lives of millions since 1962. With wonderful harmonies and Valli’s signature falsetto at its heart, this group was one of the few to withstand the juggernauts of the Beatles and the British Invasion. In a partnership that was sealed with a handshake and continues to this day, he and original Seasons member, songwriter Bob Gaudio (with producer Bob Crewe), created an astonishing catalog of music. The group, including Valli’s solo career, amassed 71 hits – 40 in the Top 40, 19 in the Top 10 and eight Number One hits. The Bee Gees tapped Frankie Valli to sing the title track to the classic film, Grease which went to Number One on the Billboard charts. In 1990 the original members of Frankie Valli & The Four Seasons were inducted into the Rock and Roll Hall of Fame. Their music can be heard in the soundtracks for commercials, movies and TV series – from The Deerhunter to The Sopranos. Younger generations keep rediscovering this music and covering it – even as a French rap song.

Throughout the concert, Valli displayed an easy wit and charm in his stories and in his interaction with the audience. He was clearly having as much fun as we were.

You would think with all of these astounding accomplishments Mr. Valli would be relaxing on an island somewhere. But at a fit 79, he shows no signs of stopping. On a hot, muggy evening at Wolf Trap, Frankie Valli gave a bravura performance for nearly two hours, backed by four young men who are the current Four Seasons and an incredible 12-piece band. He clearly loves to perform and that love was returned by an enthusiastic audience of all ages.

Valli opened the show with the hits “Grease” and “Dawn,” followed by “Tell it to the Rain,” and then one of my personal favorites, “Beggin.’” He then sang his poignant 1974 solo hit, “My Eyes Adored You.” “Swear to God,” another disco-era hit, featured several solos from the band that included the saxophone, electric guitar and, on electric keyboard, his friend and music director of 34 years, Robby Robinson.

Introducing the next song, he asked the audience to listen to the lyrics very carefully but never explained why. “Fallen Angel” is a sweet, sad ballad recorded by Valli in the 70s. Written by a British songwriter, it had some success in the UK. If you had seen the musical, you would have understood. In a heart-wrenching scene, Frankie sings the song to the young daughter he has just lost to a drug overdose. I believe it is his tribute to her. He ended this section with the upbeat “Save It For Me.”

In 2007, Valli released his first studio album in 15 years, called “Romancing the 60s.” These were the ones that got away – some his favorites songs of the era recorded by other artists. He began with “Call Me,” arranged with a jazzy spin. With “Let It Be Me,” the spotlight was all on Valli as the Seasons left the stage. They returned for “Spanish Harlem” but perhaps the most enchanting selection from the album was a medley of The Temptations’ “My Girl” and The Young Rascals’ “Groovin.’”

Back in the day, Frankie Valli  & The Four Seasons were performing in a club next to door Frank Sinatra in Florida. They were invited to see his show, which inspired them to record “I’ve Got You Under My Skin.” This was one of the highlights of this performance because as a tribute to the song’s composer, Cole Porter, and Mr. Sinatra, Valli’s band used orchestration for the horn section from the original Frank Sinatra recording. It was swingin’! 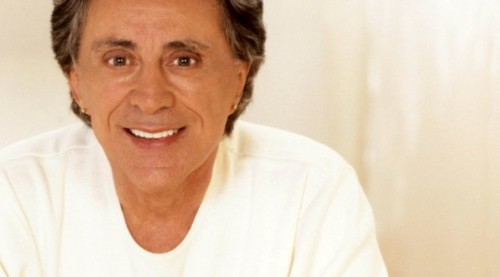 With ‘Stay,” the Seasons, who had been singing in the background seated with the orchestra, now joined him on stage with some great choreography for “Silence is Golden.” The show shifted into high gear as they accompanied Valli on some of the group’s most popular songs –“Working My Way Back,” Opus 17 (Don’t Worry ‘Bout Me),” “Ragdoll,” and “Who Loves You.”

Each of the Seasons was spotlighted in “December 1963 (Oh, What A Night)” and took turns introducing themselves. Unfortunately all I could hear amidst the cheers of the crowd was that three of the young singers were from California and Todd (whose two very enthusiastic sisters were sitting behind me) was from Ohio. Frankie Valli introduced himself as “just a boy from Jersey.”

Valli then introduced his band but the show was no means over. He spoke of growing up in the projects and dreaming of having just one hit as a singer. He also thanked the fans for supporting Jersey Boys. This introduced his first hit in 1967 as a solo artist (and the show stopper in the musical), “Can’t Take My Eyes Off Of You.” The audience sang their hearts out during the song with Valli’s encouragement.

Frankie Valli & The Four Season then performed the “Big Three” (Sherry,” “Walk Like A Man,” and “Big Girls Don’t Cry”) – so named in the musical because these were their first hits that came one after the other and launched the group to worldwide fame. The show ended with “Bye, Bye, Baby “ but of course the audience would not let him leave without an encore. “Let’s Hang On” blew the lid off the venue as Frankie Valli went up and down the stage, singing and shaking hands with members of the audience in the front row.

Throughout the concert, Valli displayed an easy wit and charm in his stories and in his interaction with the audience. He was clearly having as much fun as we were. The band was exceptional and The Four Seasons backed up Valli with beautiful vocal harmonies and some great dancing but never overpowered his vocals. He can still hit the high notes.

Towards the end of Jersey Boys, Frankie Valli says, “…like that bunny on TV with the battery, I just keep going and going…” Lucky for us. Last time I saw Frankie Valli perform it was in the 1990s with the Four Tops. Over 20 years later, I wasn’t sure what to expect. So I guess the answer to the question is when a legend gives you a truly unforgettable performance, the review is easy.