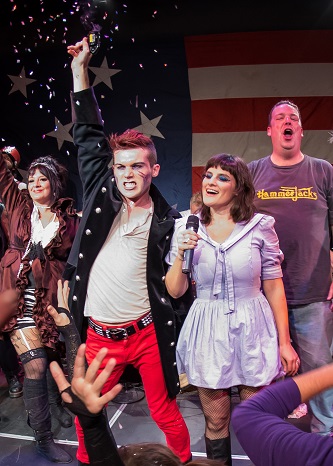 Everyone knows that international disputes and jingoistic land grabs are made easier to handle with a pulsating soundtrack. Giving deserved pub and decibels to a quite unappreciated world conflict, the Fringe Festival offering of 1814! The War of 1812 Rock Opera comes at you pretty much like an AC/DC tour stop.  In a wild hour or so of in-your-face music and dance, this light on story, heavy on backbeat show gives one a good patriotic shaking.

Just as at a concert, our narrator (Gaines Johnston) asks—“Y’all like rock and roll, right?” And we got it.  Not as much rock opera as a rock blitz. A nice touch as the plot unfurls on the screen, a la Star Wars. Essentially: we miscalculated, the Brits are coming, and they mean harm to Washington and neighboring Baltimore.

One of the initial songs is ‘War Hawks,’a fun country singalong with witty rejoinders about how this quick land grab by the US didn’t work as planned. Chris Beck, Doug Balog, and Tom Balog had the audience rolling in laughter.

Then the British invasion is on, rockin’ redcoat style. A trio of Alice Cooper lookalikes, replete with 80s hair and scowling attitude, represent the invading British. Robert Bradley leads the charge for Brittania, clad in union jack and eye black.

As Major Armistead, the defender of Baltimore, Corey Hennessey shines in his punk protector role. He elicits Mary Pickersgill (Moira Horowitz) to help the defense of Baltimore by creating, what else, but a ‘Big A** Flag’—a showstopper tune.  Their soaring vocals together were the highlight of the evening.

an ambitious attempt in a challenging genre.

The rest of the show, which impressively features 20 original songs, comes full tilt, replete with gyrating dancers that combine grunge and all American look, replicating the battles onstage. A rocking good time, but unsustainable. Unfortunately, the full intensity and volume of the band drowned out the capable and strong vocals of the cast from there on, leaving one to wonder what the lyrics were. Variation in intensity and musical style is vital and sometimes the most important person is the sound mixer, especially in a small venue.

Director Alec Lawson handles a cast of 17, along with a talented 5 person band and other instrumentalists. This ambitious show was conceived, written and composed by the team of David Dudley and Dave Israel. The ‘Book’ is really a comic book, a broad stroke in characterizations and narrative; the focus is on the music and the original songs. Wish I heard more of them.

It won’t be a kid’s history lesson, but 1814! is an ambitious attempt in a challenging genre.