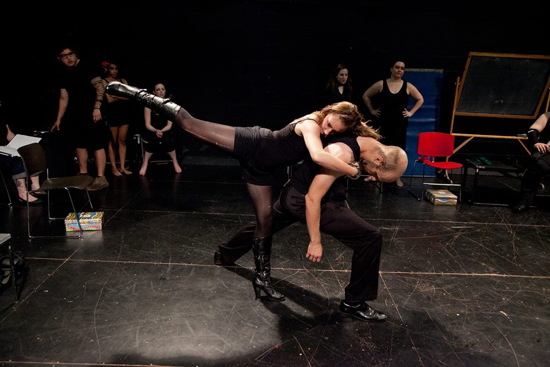 Apotheosis, presented by the Avalanche Theatre Company at the Capital Fringe Festival, does not aim to tell a story, but to capture and worship the darkness and light of human emotion. The show consists of a series of ensemble-devised vignettes on the themes of depression, ecstasy, brutality, and addiction.

The show opens with a direct address from the self-deprecating emcee Anna Lathrop, who asks if anyone knows the meaning of the word “apotheosis.” When one unlucky audience member pipes up with “to glorify something to the point of divinity,” Lathrop glares at him and accuses him of just looking that up in the dictionary. You want to roll your eyes at her petulance, but at the same time, you have to laugh, because she’s probably right. Lathrop then informs the audience that the play is not about how screwed up the world is, that the ensemble has no interest in social justice, and that the play isn’t even very good. One can only hope she’s just kidding.

High points include “Devil Roll,” where performer Ryan Tumulty leads the ensemble in a bluesy song, like salt-of-the-earth farmers at the end of the workday.

Despite its caustic beginning, Apotheosis has a cool, inviting atmosphere. The set, provided by the Bad Ideas Gang, surrounds the audience on two levels, and creates the sense that you are in a secret meeting place in the middle of nowhere. The actors look like a clan of Goth kid/ballet dancer hybrids, clad in black and sporting heavy eye makeup. Live violin accompaniment by Jon Jon Johnson lends the piece an old-timey feel, a welcome counterpoint to the very modern language. Most of the ensemble members have a “starring moment” in the vignettes, but it is unclear whether they remain individual characters from scene to scene, or if they are actors playing actors who inhabit archetypes as needed.

High points include “Devil Roll,” where performer Ryan Tumulty (who also conceptualized the piece) leads the ensemble in a bluesy song, like salt-of-the-earth farmers at the end of the workday. The piece is minimalistic, allowing the audience to feel only the intended ecstasy of the song. The final piece, “After Hours” (conceptualized by Sharisse Taylor and featuring Kathleen Burnard, Sarah Elizabeth Ewing, and Elizabeth Hansen), is evocative and symbolic. It concerns the erotic fantasies of three women, but remains tasteful and does not veer into the realm of objectification. Two women dance with a red ribbon pulled taught between them as another woman stands in the corner beneath a slowly dripping glass of water. Rather than creating tension by constant contact between characters, the piece emphasizes the pull and spark between bodies at a distance.

Though conceptually ambitious, Apotheosis is inconsistent in its delivery. The show succeeds where lightness is concerned, but fails to present darkness with complexity and depth. The implication, perhaps unintentional, is that light and dark cannot inhabit the same space in one’s mind. It feels like a huge missed opportunity, especially for a show tackling something so complicated as human emotion. 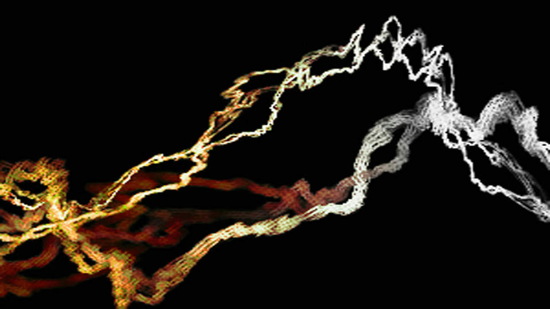 The scene entitled “The Price is Pain” is the weak link in the chain. The emcee engages the audience in a game where boxes hidden under audience chairs reveal dangerous implements— a rope, a knife, a hammer— you get the picture. The emcee forces the ensemble members to brutalize each other with the weapons, while she stands back and flatly asks the audience “is anyone else turned on by this?” The violence sits on the fence between simulation and hyper-realistic gore, and each reveal of a weapon is no more terrifying than the last. It’s difficult to share in the emcee’s voyeurism, since you never lose the impression that these are just actors playing at shock value. The material wants to be unnerving and weird, but ends up trying too hard and falls just short of edgy.

At its best, Apotheosis is a moving celebration of happiness. At its worst, it is one-dimensional and self-indulgent in its exploration of darkness. However, perhaps self-indulgence is the point. You have to give the show credit for admitting that it has no interest in the world at large— not all shows are so honest.