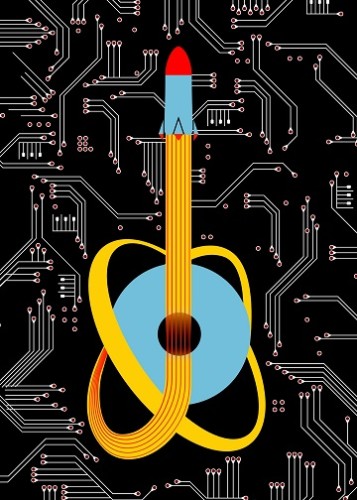 If you were to tell me 24 hours ago that the high point of my weekend would be watching a play with an incomprehensible plot, trashy topical humor, and characters that are like the imaginary friends of a demented child, I’d tell you that it must not be a very good weekend. On the contrary, Crime Buster Blast-Off 3000 turned out to be the most entertaining, least pretentious show I’ve seen in a long while. It’s also the weirdest, and there’s a lot of weird to see at Capital Fringe.

The only way to describe Crime Buster, short of rehashing the given synopsis (which leads you to believe you’re in for an evening of fun-filled crime-fighting adventure in cyberspace— this is not the case), is to describe how it feels to be sitting in the audience. Do you ever watch one sort-of weird video on YouTube, then click on one of those side-panel videos only somewhat related to the original video, and keep clicking on videos at random until four hours later you’re watching clips from early 90s religious children’s shows? Yeah, it’s kind of like that.

The “plot” is only loosely concerned with the exploits of Buster Blast, Earth’s Last Band, in an all-cyber universe sometime in the far-flung future. Buster Blast’s nemesis, a computer virus called the Porker Chomper (who happens to be a member of Buster Blast in disguise), is bent on consuming all data in the cyber-verse, which of course means the end of the world. The ensemble consists of Tobby (played by writer Ian McDermott, who claims to have based the play on a poem he wrote as a 9-year old child prodigy), The Loaf (Matt Hagerty), Emperor Gungo (Mason Trappio), the Chief (Alex Zito), a bald puppet named Velveeta (played by a puppet named Timantha B. Kertzer), and a mysterious Sound (Andrew Majors) who could be any number of pre-recorded voices, or the sound designer, or both. It doesn’t really matter which character is which, because the characters take on a different disguise at almost every scene change. One moment they’re a rock band in tracksuits, and the next, they’re woodland creatures, or the giant cardboard head of what is presumably Richard Nixon. Jesus also makes an appearance, and why not? In the world of this play, anything can happen.

‘Crime Buster Blast-Off 3000’ turned out to be the most entertaining, least pretentious show I’ve seen in a long while.

Did I mention it’s also a musical? Some of the show’s musical numbers are full of clever turns of phrase, but some could be filed under “worst musical number from the worst musical of all time,” and that’s probably not an accident. There’s even a love song between a puppet (who turns into a man dressed as a woman) and a man in a pig mask, which takes place after a feast of human meat. You seriously can’t make this stuff up. (Much of the music sounds eerily similar to the Nightman Cometh episode of It’s Always Sunny in Philadelphia, but you probably won’t notice until one of the characters dons a skintight jumpsuit and starts singing in falsetto.)

Two huge amplifiers flank the stage and drown out some of the dialogue, but when you can hear the script, it’s very strong. It may be manic and tangential, but every line works on multiple layers. It’s not a script full of pathos and psychological depth— even though it seems to exist on a separate level of consciousness— but sometimes the imagery catches you off-guard with how visceral it is. Tobby delivers a savage, evangelical profession of love to Velveeta that sounds as if he wants to murder her, not marry her. There’s a great line in that speech about fingers in open wounds that made me wish I had written it first.

The cast is crazy talented (puppet included), and drives the action forward with so much energy that you barely realize you have no idea what’s going on. If you do have a clue what’s going on, you don’t have time to stop and search for underlying meaning, which makes this production an unpretentious palette-cleanser between servings of more typical theatrical fare. Crime Buster is not a show everyone will love, but it made this theatre patron (who generally prefers her comedy highbrow and delivered with a straight face) laugh at sight gags and jokes about cannibalism.