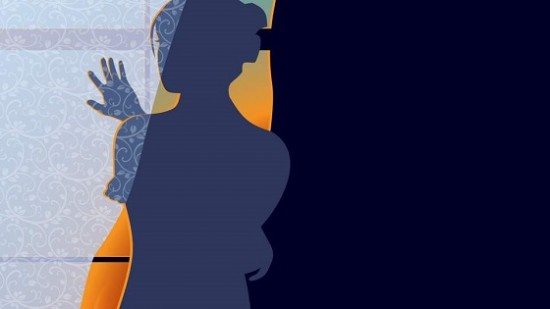 If you are familiar with William Faulkner’s Absalom, Absalom! you know that it is a dark and twisted tale of a southern 19th century family, laden with themes of sexism, racism, and incest.  Tarpley Long’s Dark House employs Faulkner’s brilliant characters, relationships and motifs, throws them into the 20th century, setting them in a Logan Circle mansion, in the heart of our beloved Washington DC.  With clever direction from Tracy McMullen and powerful performances from all seven cast members, this adaptation for the stage is quite riveting.

With a complex storyline spanning generations, I feel it’s only fair to give you the cliff notes (which in fact, exactly what the production team did, handing out summaries of Faulkner’s original work before the show).  The story begins with a wealthy business man Thomas Sutpen, played by Peter Boyer, who has found his way into the aristocracy by marrying Ellen Coldfield, played by Emily Gilson, a member of the elite, whose father disassociates from his daughter upon her marriage.

Ellen and Thomas go on to bear two children, Judith and Henry, played by Emily Gilson and Michael Knowles, who grow up living a sheltered, yet privileged lifestyle.  At college, Henry meets Charles Bon, played again by Boyer, who ends up being his half-brother from his father’s previous marriage.  His father had disowned him once realizing that his mother Lally Bon, played by Hilary Dean, had black blood.  This already dramatic plot line is made further disturbing when both Henry and his sister fall in love with Bon, making for an interracial AND incestuous love triangle.

And those are just the highlights. This story is told by Ellen’s uptight sister Rosa Coldfield, played famously by Mary Agnes Shearon, to the real estate agent Quentin Compson, played by Meshaun Labrone, as he proposed to buys the family property at 22 Logan Circle. With significant dramatic support from the family’s late housekeeper, Clytemnestra, played by Kashayna Johnson, the show crams three generations of juicy, gossip-worthy family history into one hour long production.  While the show is the equivalent of a “page-turner,” leaving one clinging to every new development, it’s safe to say that the cliff notes were a welcomed accessory to the program.

With a plot that takes numerous turns, the play would not have been as successful without its mesmerizing performances.  Dark House is one of those rare occasions in which all performers possess uncanny stage presence as well as the ability to change characters mid-scene.  Boyer charmed and terrified as Sutpen and Charles Bon, using a swift change in accent and physicality to take us through transitions.  Johnson has a powerful and fearless girlishness as Clytemnestra, and Gilson’s devastation as Judith was chillingly resounding. Distinctive character choices between roles coupled with comprehensive staging and lighting techniques, allow the piece to flow as vividly as a memory.

As a DC native myself, most interesting to me was the historical context, revealing the evolution of Washington over these tumultuous decades.  Despite being based on a story about the civil war era, Long’s characters expose the inherent racism and classism in our city that extended to the 1960s and 80s and through to the present day.  Though the characters may have been tactless in their prejudices, the controversial themes remain tasteful, with the overall emphasis being on the twisted familial relationships.  What results is a truly exciting work, exposing the ugliness of the human experience that most of us dare not admit.

Dark House is playing at the Redrum Theater of The Capital Fringe Festival through July 27th.  For tickets and more info, please visit online.