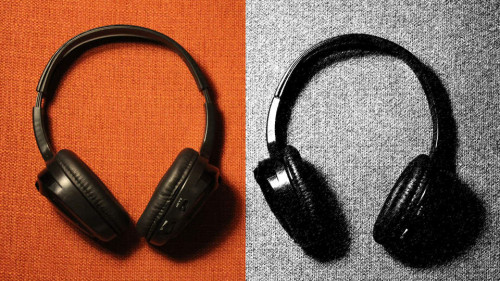 If you’re the kind of person who finds themself falling asleep during your average theater production, listen up. This must be one of the few opportunities where you’ll not only be asked to, but encouraged to multi-task, play with digital devices, and listen to surround-sound DURING the performance. True to Fringe’s reputation for “experimental” theater, AVAdventure Production’s Double Frequency investigates a form just surfacing in the modern theater world, cleverly dubbed “interactive audio theater.”  With dual channel headphones handed out at the top of the show, audience members “interact” with the story by switching between channels throughout the show, each playing a different audio track.  By allowing viewers to build their own unique, multi-sensory theater experience, boredom is easily discarded.

…its innovative techniques … show significant promise for the future of this form.

Abstract as this may sound, the production actually follows a rather coherent plot.  The two leading females Alex and Renee, played by Summer McCarley and Caitlin Carbone, are ex-roommates who now live in neighboring apartments notorious for their paper thin walls.  After their falling out as roomies, the girls engage in a passive aggressive war, taking on new roommates, played by Josh Blubaugh and Mauricio Marces, to make each other jealous.  The ever-escalating drama is split between stage right and stage left, each with corresponding audio channels synced to the actors miming and lip-syncing on stage.

One might be concerned that the multiple sound and storyline options would induce FOMO (for those non-millennials out there, this stands for “fear of missing out” and is used to describe the chronic non-committal attitude of our generation).  However, I can proudly say this is not the case.  The lack of sufficient sound barrier between living spaces not only makes for amusing character interactions, but also means that the audio can be heard through both tracks and that not much is lost.  Other than a few scenes in which the audience has the option of hearing the two characters’ dialog versus their unspoken thoughts, there wasn’t much opportunity to become confused.

Double Freakquency, written and Directed by Adam Stackhouse and Liz Sykes, was well-staged, thought-provoking and demonstrates expert sound engineering. While the more traditional theater goer might critique the “juvenile” character relationships and modest set, its innovative techniques and fully encapsulating methods show significant promise for the future of this form.

Double Freakquency will be showing through July 27th at Studio Theater.  For ticket please visit here.