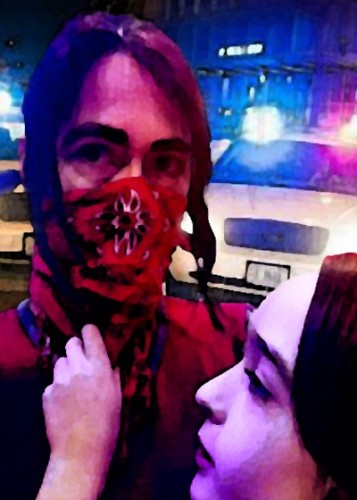 The 2011 Occupy Movement profoundly affected the American social landscape, forcing all but the most psychologically reactionary to acknowledge the impact of class on people’s understanding of politics and human relationships.  Originating in New York City and soon spreading all across the country, the occupiers and their reclaiming of public space for discourse and community soon became the nightly talk of the evening news.

Kelly Caravan’s new play, McPherson Madness, now playing in Capital Fringe’s Studio Theatre location, represents well the reality of the Occupation, warts and all.  McPherson Madness does more than expose the behind-the-scene struggles of the struggle, however; the play focuses on the character of Dreama, a single mom with a chronic condition who finds rebirth within the idealism of the movement. McPherson Madness then depicts Dreama’s personal battle to balance her commitment to the occupation and her responsibilities to her son.

Caravan has elected to portray her lead character Dreama as two separate women, a decision that prevents us from experiencing the full impact that the stress of mothering the Occupation was having on the character. Info Dreama is the Occupation’s Dreama, the woman with a welcoming smile on her face.  Jen Bevan portrays this easy going Dreama with charm.  Tina Ghandchilar plays the other Dreama, what one must assume is the real Dreama, the one who goes to her doctor and to others with her concerns, fears, distress.  Ms. Ghandchilar captures some of the stress of organizing the Occupation, but the script suggests more burnout.  We hear concerns about the Occupation changing Dreama, damaging her health, stressing her out, but that journey never reaches a crisis.

…represents well the reality of the Occupation, warts and all.

Scenes depicting the Occupation itself rang with authenticity, as the large ensemble of Occupiers performed the rituals and chants with energy and enthusiasm. These scenes also made it easy to see why anyone who was in charge of this male-dominated environment would become worn out and disillusioned.  Besides the need to maintain some type of order in the public space of the park, there was also the stress associated with “herding cats,” of dealing with the constant sexual tension between and among the young men, as well as the pain associated with watching your dearest friend Tracy, played sympathetically by Sean James, slip into alcoholism and despair.

Director Lynnie Raybuck does a fine job keeping the action moving and the Occupation and its large ensemble real.

Caravan’s new play has a great deal of potential as it merges the public and the private spheres quite well and allows its audience to witness the sacrifices and struggles a mother faces when trying to combine the work of social change with that of childrearing.