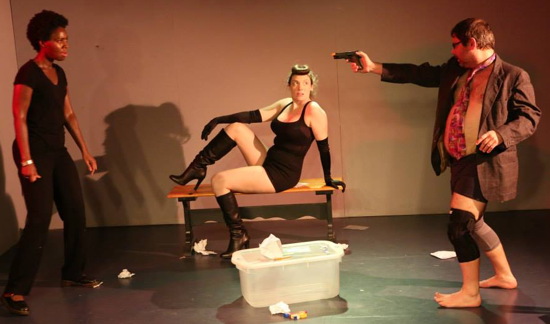 Stephen Notes’ Moths, now playing at the Capital Fringe Festival and directed by Roma Rogers, is an exercise in self-expression masquerading as play about insects. Or rather, people who may or may not be turning into insects.

If the plot sounds familiar, that’s probably because at first glance Moths looks like a rip-off of Ionesco’s Rhinoceros (except in the case of Ionesco, people transform into— you guessed it— rhinoceroses). Moths employs many of the linguistic tricks common in absurdist plays. The dialogue consists of circular conversations, non-sequiturs, inventive vulgarity, and spontaneous intellectual mumbo-jumbo. Its three actors play seven morally bankrupt characters trying to take advantage of each other financially, sexually, and emotionally. Of course, there’s the matter of the moths, which remains a red herring until the final moment of the play.

‘Moths’ is a bit derivative of other absurdist plays, but to those of an artistic temperament, its themes ring true.

Moths is intellectually stimulating once you get past the details that are weird for weird’s sake. (A whole hullabaloo is made about whether Roy and Lili keep buttermilk in the house, Marcus is fixated on how his face is turning red, and there is a shameless Godot-esque bit about where to place the visitors’ bowler hats.) Some audience members, even those familiar with theatre of the absurd, might spend the hour of stage time wondering what is going on and why everyone is making such a big deal about the moths.

Moths is not so much a study of the human condition as the study of one human’s condition. The play has its own system of logic, if you consider that the story is all in the playwright/narrator’s head. Playwright Stephen Notes appears as three characters— the dim-witted Roy, the scheming gangster Marcus, and the Narrator, a thinly veiled avatar of the playwright. Much of the dialogue sounds like the inner monologue of an artist arguing with different facets of his psyche. Roy wants to draw, but he believes everything he creates is worthless. Marcus writes poetry, but no one wants to listen to him recite it. Even the characters not played by Notes struggle with self-expression— Lili is unable to say the right thing to win Roy’s affections, and the Father berates the Son whenever he expresses a desire for an education. Desperate to be free, the characters destroy one another, but there is no sense of remorse or that their actions have any lasting consequences. 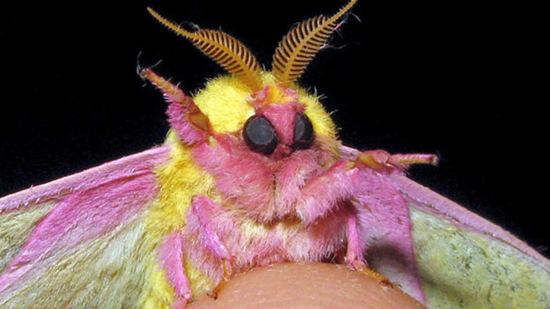 Moths’ particular brand of moral ambiguity is likely to polarize an audience, and therein lies the play’s greatest strength and its greatest weakness. An interesting intellectual problem arises—the audience must decide whether a desire for individual freedom justifies questionable behavior. Depending on which side you take, the play could be poignant, or it could be obnoxious.

The play lacks in-the-moment precision, and often feels like one long inside joke with no punch line. Director Roma Rogers does little to clarify the more abstract moments, especially the final moment where Roy discovers (spoiler alert) that Lili has turned into a moth. (If the program had not mentioned this detail, it would probably go unnoticed.)

Stephen Notes’ talent lies in the construction of the play, not in his performance. Notes mumbles his way through the concurrent dialogue of Roy, Marcus, and the Narrator. The accents he employs to differentiate the characters are inconsistent. Luckily, the supporting actors pick up the slack. Anika Harden is excellent as both the Father and the Son. Without Alexandra Friendly’s subtle shifts in tone and physicality, the character of Lili would seem one-dimensional, a stereotypical high-maintenance woman whose only purpose is to inflame the passions of the male characters. Friendly brings an individual motivation to the character, and gives Lili subversive power over her male counterparts.

Moths is a bit derivative of other absurdist plays, but to those of an artistic temperament, its themes ring true. Unlike its predecessors, Moths has no large-scale social or political implications. It is instead a personal, singular vision— albeit a disjointed one.