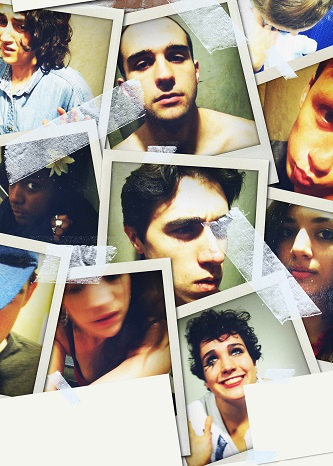 ‘Polaroid Stories’ at The Shop.

Naomi Iizuka’s Polaroid Stories, now playing at the Capital Fringe, epitomizes the definition of theatre. From the moment the street-wise adapted characters of Ovid’s Metamorphoses emerge from behind a chain-link fence, the power of myth reigns supreme, plunging the audience into a world of gods and lovers, drugs and money.

While Metamorphoses itself is the story of heroes and monsters, Polaroid Stories transmutes those narratives into the real world–Dionysus (Sheen Mercado), once the god of wine and revelry, becomes a slick dope dealer, candyman to a clan of drug addicts and desperate vagrants. The story of Semele (Jonelle Walker), his mother, takes on a combination of desperation and cynicism, her addiction to the love of a god (Geoff Blizard) entwined with her addiction to drugs. By far the most interesting adaptation is the interaction between Narcissus (Chris Carillo), a self-absorbed boytoy scoping the city for sugar daddies, and Echo (Annelies Van Vonno), whose rapt fascination falls apart against Narcissus’ incapacity to love anything but himself. The two skinheads (Brandon Deane and Andrea Parente) are heartbreaking in their stark reality, particularly Parente’s strung-out monologue about her series of failed loves. The story of Orpheus (Matt Meyers) lacks the poignancy of the original tale but makes up for it with an almost palpable degree of lust.

…remarkable for its boldness, its complexity, and its spellbinding effect.

The production I saw was shorter than expect, but the show ran so smoothly under Jonelle Walker’s confident direction that a missing cast member and ending 25 minutes early seemed completely irrelevant. It takes a lot of skill to pull off a play that consists of a series of narratives, especially with such a large ensembles. That being said, Blind Pug Arts Collective’s debut is truly remarkable for its boldness, its complexity, and its spellbinding effect.

Advisory: profanity, depictions of drug use, and some violence. It is not for children.