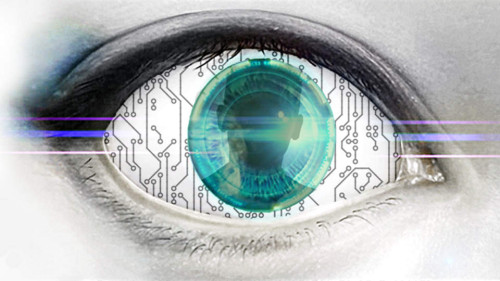 Karel Capek’s R.U.R. (Rossum’s Universal Robots), playing at the Capital Fringe Festival, is a frantic cautionary tale of what happens when mechanical efficiency surpasses human intelligence. The production attempts to modernize the 1920s classic with iPhones and electronic music, but works best when it embraces its retro roots.

In the future world of R.U.R, Rossum’s Universal Robots look identical to humans, but are stronger, smarter, and more cost-effective. Devoid of emotional weakness, the robots are ideal workers (roughly translated, “robot” means “slave” in Capek’s native Czech).With robots doing all the heavy lifting, humankind is free to sit back and focus on more important tasks, like self-improvement and playing the piano. Of course, no paradise lasts forever, and when the robots learn to feel the pain of working tirelessly with no pay, they do what any freethinking human would do— they revolt.

… wisely focuses on the bigger question: “When are you going to learn your lesson, people?”

The acting is melodramatic, but coupled with old-fashioned turns of phrase the effect is kitschy and nostalgic, like an episode of The Twilight Zone. Mike Rudden leads the ensemble as Domin, head of the robot-manufacturing company. In long-winded speeches about the origins of robots, Rudden has a hint of the mad scientist about him. Overall, the ensemble functions like the proverbial well-oiled machine. Elliot Bales, Adam R. Adkins, Will MacLeod, and Ryan Andrew Mitchell give strong performances as the factory managers. Bob Rosenberg as physiological expert Dr. Gall could have been stronger, rushing through his technical dialogue at too quick a pace and too quiet a volume. Kathryn Zoerb and Eugene Fertelmeyster play the robots Helena and Primus with childlike enthusiasm, providing an interesting counterpoint to the robots Sulla and Radius (Tanya Chattman, Adiyb Muhammad), who represent the cold logic of the earlier robot prototypes.

Like the robots of its namesake, R.U.R. is problematic when it becomes self-aware. Directors Rachael Murray and Cory Cunningham try too hard to drive home the play’s themes with anachronistic details like iPhones and electronic pre-show music, and the actors deliver all tongue-in-cheek lines with a sharp elbow nudge to the audience. The play lacks visual interest and a consistent design style, particularly in costuming. The women wear mid-century-inspired dresses, Domin dresses like a hip Google employee, and the factory managers look like they came straight out of Revenge of the Nerds. A single strong design concept would be acceptable and welcome, but so many concepts at once make each concept look like an accident.

Karel Capek may have coined the term “robot,” but R.U.R was by no means the only work of its time exploring the relationship between man and machine. In 1923, two years after the first production of R.U.R., Elmer Rice’s The Adding Machine appeared on the stage, and Fritz Lang released the film Metropolis in 1927. If the sociological implications of a society reliant on technology were important in that decade, the same questions can only be more relevant now. Despite its stylistic flaws, Naked Theatre Company’s R.U.R. wisely focuses on the bigger question: “When are you going to learn your lesson, people?”