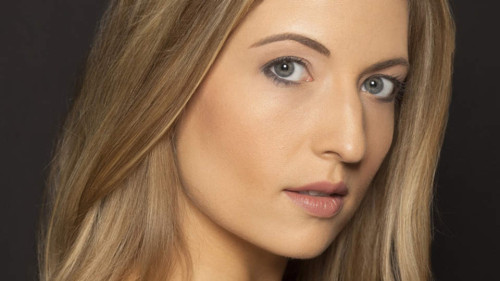 For better or for worse, social media has had a major impact on our lives. These days, it’s nearly impossible not to share (or overshare) our every thought and every move via a well-crafted online profile.  Some people use Twitter to stay current. Others use Instagram to post pictures of fun vacations and nights out on the town. In 2011, model and dancer Kathryn Elizabeth Kelly used Facebook to document her journey from “homebody to bona fide DC socialite.” In her new play, STATUS: A Social Media Experiment, Kelly retells the adventures of that wildly eventful year.

It started with a painful break-up. After ending a six year relationship, Kelly, a beautiful, leggy blonde decided to get over the heartbreak by accepting any and all invitations that came her way.  Almost immediately she began attending parties at upscale nightclubs and schmoozing with Georgetown trendsetters and millionaires. All the while she documented her climb up the social ladder on Facebook, tracking of course, her many photo uploads and friend requests. How better to measure one’s popularity in the internet age, right? Through it all she repeatedly asked herself, “what happens when you just say ‘yes’?”  Does your life change for the better? What do you learn about yourself? And in the end, is being a social butterfly even worth it?

This one woman show feels more like a conversation amongst friends than an actual full blown performance.  Dressed in all black, Kelly merely sits in a chair and talks directly to the audience. Armed only with a laptop and dinner bell which she uses to punctuate every “yes” she utters to her invitees, Kelly introduces us to the colorful cast of characters she meets. For example, there’s “D. Piddy,” the party guy who can get you into any club, guest lists be damned. Then there’s “the Billionaire” who enjoys yacht parties, expensive scotch and keeps his boat stocked with a supply of bikinis for his female guests. Kelly’s stories are the stuff of Access Hollywood or Entertainment Tonight; it’s all very posh and glamorous. And if you’re into that sort of thing, Kelly makes sure to offer a few fun and cheeky insider tips including my favorite, “Socialite Rule #48: Don’t order red wine at a White Party.”

…you will absolutely relate and enjoy.

While the events of her life are mostly interesting and her comedic timing is very strong, Kelly’s stories often threaten to depict her less as an endearing raconteur and more of a name dropper and braggadocios. I mean really… it’s kind of hard to sympathize with someone who is stressed and exhausted simply because she’s an in demand socialite. Good news is Kelly does manage to prove that she is not without depth. She shares her vulnerability, weaknesses, and shortcomings and most importantly offers many valuable moral lessons learned during her “year of ‘yes’.”

My only heartbreaking gripe with this production is its lack of movement and physicality. The entire show is practically run by Kathyrn Kelly herself. From a laptop she navigates a series of point and click images that are projected onto the wall behind her.  The projections themselves are very cleverly designed to resemble a real Facebook page.  But because she is controlling the page and not say, a crew member, Kelly is forcibly bound to her chair for the entire show. Rather than merely mentioning her talents as a dancer, I would have loved to witness a pirouette in action. And though the projected pictures do help, I would have paid extra to witness Kathyrn Kelly dancing along to Lady Gaga in her oft mentioned five inch, designer stilettos.

Nonetheless, hers is a commentary on the value of “real” friendship and the importance of living life to the fullest. The takeaway is this; when you’re down, get your bottom back up, enjoy life, love, and the people around you. For these reasons, you will absolutely relate and enjoy.