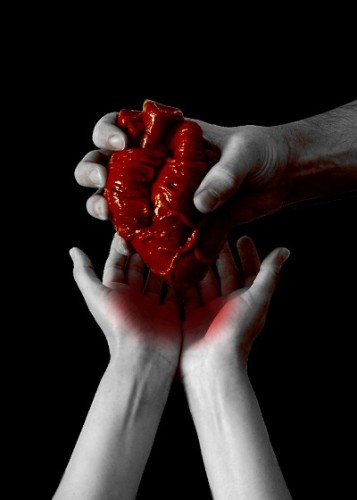 Grain of Sand Theatre has achieved the impossible by keeping their perfect track record of well acted, well staged productions at Capital Fringe with this year’s entry Tell-Tale, which is a modern take on Poe’s The Tell- Tale Heart. With the usual ensemble of high powered talent that I expect from this company, playwright Hunter Styles takes the story you are used to hearing and then adds modern day twists to it.

Hannah (Sara Bickler) has a unique trait. Her blood can actually heal people. When Logan (Matthew Ward) is in a horrific and near fatal car accident, his transfusion is given to him with Hannah’s blood which in turn leads to a miraculous recovery. This is something Logan’s wife Charlie (Amal Saade), who is an investigative journalist, is quite skeptical of this and is determined to get the whole story. Then we have a creepy and sleazy doctor named Parker (John Stange) who is keeping some secrets of his own. Pamela H. Leahigh completes the cast playing multiple character roles including a police detective named Gibson.

Director Carl Brandt Long’s staging uses every inch of the teeny tiny Bedroom at Fort Fringe. He’s even managed to solve the problem of how to create a hospital bed. No spoilers here. The staging compliments the script’s intimacy perfectly.

I can’t say enough about the acting ensemble. Sara Bickler once again delivers a terrific performance while Amal Saade never ceases to impress me when onstage. John Stange has a commanding presence and this is the first time in a Grain of Sand show where he does not get the living daylights kicked out of him. Guess there was no place for a pitchfork fight in this one. I really enjoyed Matthew Ward’s performance with its multi layered approach and I wanted more of Pamela H. Leahigh. I’m hoping in the next incarnation that will happen.

All in All Tell-Tale is highly recommended. With a solid script and superior cast and direction it is a definite must see. Grain of Sand Theatre just keeps putting out high end stuff and this one is no exception.