Fringe Review: ‘The Afflicted’ at Gala 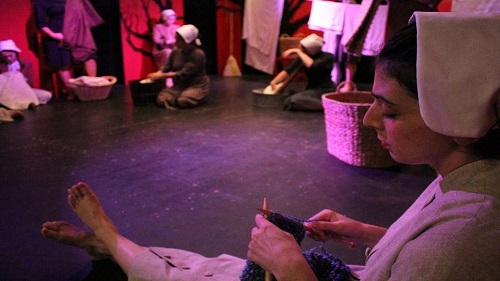 ‘The Afflicted’ at Gala.

The Afflicted opened at the Capitol Fringe Festival July 16th, running through the 21st. Presented by the Wandering Theatre Company, the play focuses on the young girls and women who accused their neighbors of witchcraft during the Salem Witch Trials of 1692. Though the characters in the play did exist, the play fictionalizes what may have led them to claim they were victims of the occult.

The play is set as though a somewhat modern-day writer, played by Joelle Golda, is researching the events of the Trials and trying to uncover the girls’ motives. The time frame is somewhat muddled, as Golda had scattered Starbucks coffee cups around her, but was using a typewriter to tell her story. Adding to the confusion was that occasionally the characters seemed aware that they were being studied and written about, and would attempt to address the writer or the audience directly. However, most of the time they seemed oblivious to being onstage, so it was unclear to what extent the fourth wall was being broken.

If there was a lead in this ensemble-driven show, it was Becky Baker as Ann Putnam Jr., the ringleader of the girls who would go on to claim possession. Ann’s character development was too shallow to afford any explanation as to her behavior, other than childish vindictiveness. As Ann was only twelve at the time of the Trials, this is understandable. Baker’s opening and closing monologue, in which she apologizes for her part in the conviction of innocents (an event which did occur historically), was moving, and nearly made up for the lack of depth given to the character in the script.

The other girls in the main ensemble were similarly mysterious. Their motives were never really explored, except through vague guesswork. Most of the girls were hard to keep straight, as none of them really displayed any individual traits or development. One who did standout was Caitlin Berger as Mercy Lewis. Though still not satisfactorily fleshed-out as a character, Berger gave her character a personality, and made her actions seem more like conscious decisions than the other actresses did. She confesses at one point that she knows everyone’s secrets, yet no one knows hers. This made her seem intriguing, if not exactly likeable. Berger’s performance was refreshingly honest.

Tangent to the group of young girls was a slave named Tituba, owned by the preacher Samuel Parris. Though at first discouraging the girls from dabbling in “black arts” (the equivalent of girls playing Bloody Mary at a sleepover), Tituba later is accused of witchcraft herself, and of torturing the young girls. Played by Claudia Givings, Tituba was one of the more fully rounded characters, perhaps because so much mystery surrounds the real life Tituba. Givings, who was not only a strong actress, but a fair dancer as well. Her dance, while placed strangely in the storyline, was beautiful, and showed more depth of emotion than nearly everything that had preceded it. When Tituba addressed Golda at her typewriter, it was open and frank, and did not feel stilted in any way. Givings was like a breath of fresh air.

The story is interesting, and with more exploration could be really moving and thought-provoking.

The company used a movement technique called Viewpoints, which gives a vocabulary to the ways actors use their bodies to express and to tell a story. That being said, it was surprising how a company for whom physicality and movement is so important seemed to be so uncomfortable with their own bodies. Not only did the actors seldom seem to know what to do with themselves – fiddling with the same prop numerous times, playing idly with their hands – they also seemed uncomfortable interacting with each other. Eye contact was rarely made – even when the writer seemed to be addressing the audience directly, she didn’t seem to know where to look, so she ended up looking primarily at the floor. For a company that uses Bogart’s Viewpoints, their physical and vocal expression seemed stifled, rather than fully explored.

Since during the Fringe Festivals, the companies share spaces, and do not use any one theater for any long period of time, it’s understandable for the set and lighting to be more temporary fixtures. For The Afflicted the set, by director/writer Natalie Villamonte Zito and Caitlin Berger was simple – some trees and stumps for outside, benches and chairs for inside. All very simple, as the Puritan characters would have wanted. Lighting, by Christian Steckel, was effective yet simple. At the end, each character turned their back on the audience, raising a lantern against a stark red backdrop. This was a stunning image, and in a more adaptive space and with more time to work, Steckel could probably produce something even more impressive.

The play is very faithful to the events of the Salem Witch Trials, except of course for the parts no one can explain – the behavior of the girls, primarily. Real names are used, and an overview of what happened to the girls afterwards is given. So for those who are well-versed in history, or who know a lot about the Trials, this play would probably hold a good deal of interest. However, the message of the play is simultaneously confused and heavy-handed. It seems to hit you over the head with the idea that these girls were too young to know what they were doing, and should not be held accountable for their actions. However, it also portrays the girls – Ann Putnam Jr. in particular – as being malicious and vindictive. How it unites these two is never really explained. It contains a lot of physicality that should have been explorative and freeing for the actors, but ends up looking quite comical. A whole minute of the show is just the actors running in slow-motion to their next position, with no explanation given. The story is interesting, and with more exploration could be really moving and thought-provoking. But it’s not there yet.

Advisory: One instance of inappropriate language.

The run of The Afflicted is over. For other fringe shows click here.