Fringe Review: ‘The Young Olympians & The Most Amazingly Awesome Adventure Ever’ 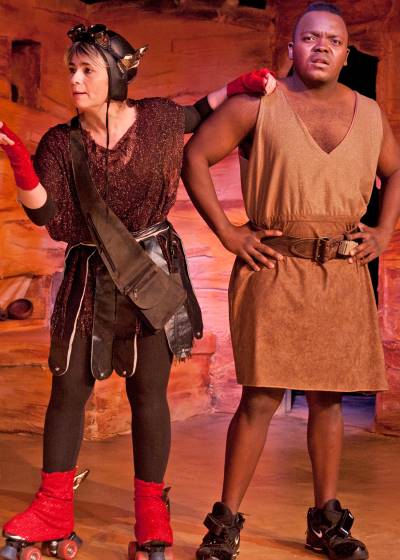 ‘The Young Olympians & The Most Amazingly Awesome Adventure Ever’ at the Captial Fringe.

Who wants to be a hero? Who has what it takes? Will the younger generation of demi-gods and wannabes fill the god-sized shoes of their flabby forefathers, or will Hades take over once and for all? These and other big questions are on the table in Maryland Ensemble Theatre’s original production of The Young Olympians & The Most Amazingly Awesome Adventure Ever, now playing at Studio Theatre as part of the Capital Fringe Festival.

The show gets off to a slow start, and it’s often difficult to hear the lyrics over the pre-recorded score—an odd problem in such an intimate space—but the energy picks up dramatically as the journey goes on.  Sarah Shulman has crafted a tight and clever script in collaboration with composer Thom Huenger, who also appears as Perseus. He and Andromeda (Caitlyn Joy) give the strongest vocal performances of the ensemble, while Lisa Burl shines in her portrayals of Hermes and Medusa.

…a funny and  engaging musical for the whole family.

Much of the comedy stems from the puppetry and props (Vanessa Strickland); the actors have everything from a stone MacBook to a cuddly Cerberus at their disposal, and they make good use of their world. The sound design (Ken Poisson) also lends a few laughs, especially in Perseus and Medusa’s Street Fighter-esque encounter.

“Amazingly Awesome” might be a stretch, but Young Olympians is a funny and  engaging musical for the whole family.  Those who attend without children may well end up feeling young again; if snatches of Smashmouth and All that Jazz don’t take you back, I don’t know what will.

Running Time: One Hour with no intermission.