Theatre Review: ‘I Do! I Do!’ at American Century Theater 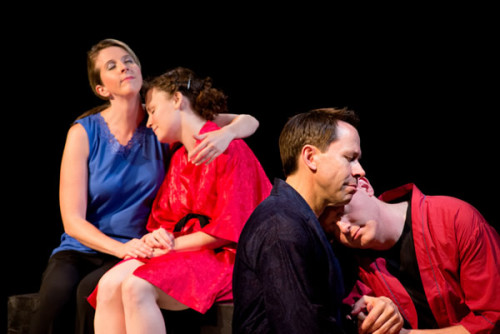 I Do! I Do! opened originally on Broadway in 1966 and starred Mary Martin and Robert Preston. The show was written by Tom Jones (Book and Lyrics) and Harvey Schmidt (Music), whom you most probably know as the writers of The Fantasticks. The story follows a couple through 50 years of marriage from their wedding night forward. The show also spawned a hit recording by Ed Ames’ of “My Cup Runneth Over,” which was recorded by other artists as well.

…Mary Beth Luckenbaugh is the best.

I Do! I Do! was originally presented with two performers in what some would say was an idealized portrayal of marriage,  making it feel dated by today’s standards. Enter American Century Theater’s Artistic Director Jack Marshall with an idea. Add two more performers to the show and see it through the eyes of three couples: one heterosexual, one gay, and one lesbian. In theory this sounds like a way to update the show and make the show fly with today’s audiences.

While Marshall’s idea is admirable, his production would have benefited from a “less is more” approach. Marshall has staged the show where characters jump in and out mid scene. For example, say the scene starts with the gay couple; one character goes into the bedroom and another character–say from the heterosexual couple–appears and continues with the same scene. It would seem to me that if you wanted to “update” this show to reflect gay marriage and other things that have changed since 1966, why not just stick with the original format having  two actors and present it with a full gay marriage theme. The way it is presented here feels like the show is run through a blender. 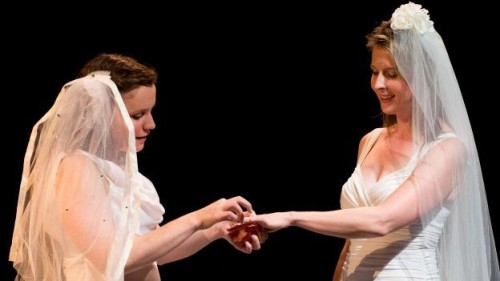 What is most troubling to me is the way the score is presented. The single piano accompaniment by Musical Director Tom Fuller at my performance (there are usually two pianists at each performance) was full of clunkers and dragging tempos. Harvey Schmidt’s piano parts are always a challenge, so if you are going to do one of his shows you want to make sure you have top notch musicians in place.

Of the performers Mary Beth Luckenbaugh is the best. I very much enjoyed her vocals on “Something Has Happened” and her duet with Chad Fornwalt called “What is a Woman” (usually done as a solo) was another highlight of the evening. The other two performers Esther Covington and Steve Lebens don’t fare as well. Covington’s “I Love My Wife” was just alright in interpretation, and Lebens didn’t make much of an impression on me for the whole show.

I understand when you do a musical on a small budget you have to make do, but not even dressing the platforms to look like a bed and having your actors mime almost all of the props is pushing it.

I Do! I Do! is a musical that is not done very often and it’s too bad because it has a lovely score and story. If you have not seen this show before, and are only familiar with The Fantasticks,  it is worth seeing  because of the creative team of Tom Jones and Harvey Schmidt.

Running Time: 2 Hours and ten minutes with one intermission.

Disclosure: The reviewer was employed by TACT for a short time a year and a half ago. This had no impact on his opinions for the production.