Theatre Review: ‘A Discourse on the Wonders of the Invisible World’ at the Contemporary American Theatre Festival in Shepherdstown, West Virginia 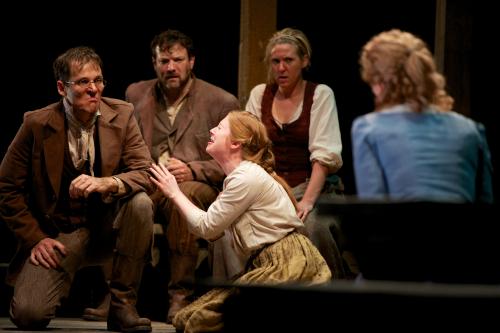 Liz Duffy Adams’s A Discourse on the Wonders of the Invisible World begins with a promising premise.  Abigail Williams, the young girl whose visions of demons and witches initiated the Salem Witch Trials, returns to the outskirts of Salem ten years later seeking answers.  She seeks out her co-testifier, Mercy Lewis, and finds her running a tavern in the New England woods.  Abigail presses Mercy for her understanding of those blood-thirsty times.  Mercy, however, wants nothing to do with recalling those dark days.  Witches are witches and its best to move on.

The design team for the production did an admirable job with the scenography.

Unfortunately, the arrival of Reverend Peck and his friend Judah soon subvert Abigail’s role as the story’s protagonist, and another Witch Trial begins with its promise of an hysterical hanging or two, as another visitor arrives, John Fox, whom Mercy and the Reverend imagine is Satan himself. 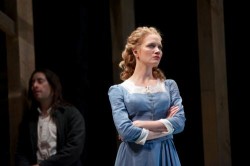 If all of these shenanigans seem a little incredible to you, and a bit rushed, that’s because they are.  But even if you are willing to accept the absurdity of such happenings, which I did, Adams makes the devastating decision to drop the hysteria altogether in Act II.  After Fox declares himself Satan and proceeds to terrify this easily unhinged clan of New Englanders with some wonderful pyrotechnics, he flees with Abigail to the tavern’s roof where the two “demonic” suspects can fall in love.  At that point my willingness to suspend disbelief had all but dried up, leaving me yearning for Abigail, the wise woman and the seeker of truth and reason, and a past, to use some discourse of her own to wage war against this madness.

Director Kent Nicholson does little to solve these weaknesses in the play’s construction.  As a result the danger that exists in the larger environment, and that might have served as some sort of glue to the diffuse actions in the story, never materializes on stage.  Specifically, we never experience behaviorally the new war with the Indians that the characters speak of.  And war and its horror is the fabric that connects the trails of 1692 to those of 1702.  Plus, Abigail and Mercy lived and suffered through the horrors of the earlier war, seeing both their parents brutally killed.  By not bringing that visceral fact to the stage, the production failed to gain the gravitas necessary to justify and support its actions.

The acting ensemble for Wonders of the Invisible World would no doubt have done a better job with a better script. 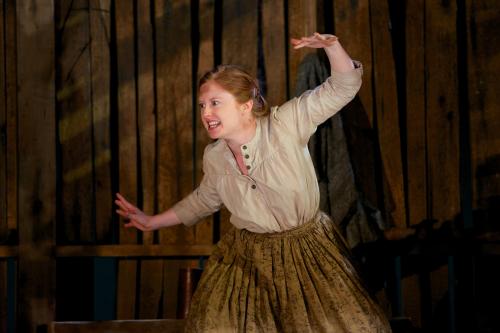 Susannah Hoffman plays Abigail, who for the last ten years has traveled city to city, only calmed and granted peace by the sea.  Ms. Hoffman does a good job capturing the character’s initial quest, but fails to bring Abigail’s tormented soul to the stage.

Cassie Beck plays the tough, business-minded, yet ironically witch-fearing Mercy. In fact, given her entrepreneurial spirit, one can only assume that her participation in the new Witch Trial has something to do with material gain.  Unfortunately, we never find out her true motivation.

Mercy’s servant girl Rebekkah, played vivaciously by Becky Byers, does a fine job with her monologue, capturing the zeal of a young girl’s dream of the stage.  Her dissolution, unfortunately, suffered the same fate of the other characters in that it happened far too quickly and inexplicably.

Joey Collins plays Reverend Peck, the comical, small-minded lover of Cotton Mather, the author of the play’s title.  He and Judah, played by Rod Brogan, fare better in the production in that their characters’ motivations and behaviors seem rather simple, even if they too veered off course on occasion.

Gerardo Rodriguez’s John Fox, the outsider, probably fares best of all in this play because the playwright requires him to remain aloof and above it all from the very start.

The design team for the production did an admirable job with the scenography.  Set designer Luciana Stecconi’s depiction of the New England woods was remarkable, and costume designer Devon Painter captured the 1700s with simplicity and grace.

After seeing this play it is clear that Liz Duffy Adams had something that she wanted to say about the world in which we live.  The fanaticism of the present, the demons lurking behind even tree, are currently with us, and plays that address that condition, like Ionesco’s Rhinoceros  addresses the rise of Fascism or Miller’s Crucible addresses the hysteria of McCarthyism, are no doubt needed more than ever.  Pedantic plays like A Discourse on the Wonders of the Invisible World, however, do not provide the necessary antidote to deception, self or social.  What is needed are plays that follow their opening premise, driving their narrative arguments home.

A Discourse on the Wonders of the Invisible World plays at the Frank Center Stage, 260 University Drive, through July 27. For info and tickets click here.