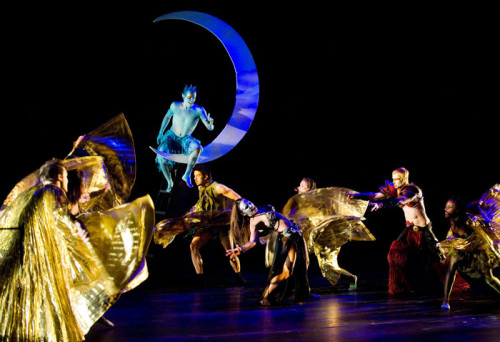 The cast of ‘Midsummer.’ Photo by Kevin Allen Photography.

Silent theatre may seem like an outlandish concept – how can one tell a story or relate to an audience without words? However, 2011’s surprise movie hit The Artist proved that the very best storytellers can convey emotions without using a single word. And what The Artist did in the cinema, Synetic Theater is doing live onstage, every night with A Midsummer Night’s Dream. For those who have never experienced silent theatre, it is sure to be an eye-opening experience.

It is fortunate – and probably intentional – that Synetic chooses such well-loved and popular scripts. From their previous run of The Three Musketeers, to plays like Midsummer, their shows seem to lean towards the familiar. This lets them treat the storyline as of secondary importance – what is more important is the way in which they tell it. For Synetic that is primarily through movement, using their bodies to convey emotions and tell the story. Those familiar with Commedia dell’arte may recognize some of the ways actors use certain patterns of motion to convey character traits or feelings. Even without a word being spoken, it’s amazing how clearly the story, and the characters within it, come across.

…no one does it better than Synetic Theater.

Midsummer of course focuses on four lovers, who through various misadventures, and with the help of several fairies, fall in love with the wrong people, but are eventually reunited with their actual paramour. In this production, the performers playing Helena and Demetrius and Hermia and Lysander were all incredibly strong. Played by Emily Whitworth, Peter Pereyra, Irina Kavsadze, and Scott Brown, the four leads were, even without the most stage time, easily the most memorable performances of the night. Emily Whitworth was particularly impressive as Helena. Simultaneously reminiscent of the “best friend” in every romantic comedy, and a strong, independent character in her own right, Whitworth gave a beautifully lighthearted but moving performance.

Giving equally strong performances were the King and Queen of the fairy realm, Oberon and Titania. Played by Philip Fletcher and Tori Bertocci, these two characters moved with an ethereal, otherworldly quality to their physicality. Opening the show with a sensual, almost tribal dance, they showed that they could beautifully express love and desire, with nothing more than their bodies as instruments. Their “fight” later on in the show, expressed through a stunning mixture of dance and acrobatics, was breathtaking.

You can’t have Midsummer without the players – the lowly commoners who dream of being actors. After all, these are roles once performed by the Beatles themselves! The endearingly tragic play-within-the-play is often the highlight of the show. This was both true and false with Synetic’s players. Katie Dubois Maguire and Vato Tsikurishvili as Francis Flute and Tom Snout gave very likeable and grounded performances. They were the most relatable of the group, and the most entertaining. Some, like Ryan Sellers and Irakli Kavsadze as Peter Quince and Bottom, respectively, took the “ham” factor a little too high. While the slapstick elements and physical comedy (throwing themselves down stairs, twisting their faces like rubber) was at first highly entertaining, it went on a bit too long. All in all, however, the players are supposed to provide a bit of lighthearted humor, and in that respect, they succeeded.

Of course, what is Midsummer without its key mischief-maker, Puck. Played by Alex Mills, this blue-skinned trickster is at the heart of the show, causing mix-ups and mayhem wherever he turns. Mills portrayed Puck like a kid in a candy shop, with delight and eagerness at every opportunity to cause problems or to laugh at those in trouble. His movements were playful and fully committed, lending to his open and childlike disposition. Though not as intentionally cruel or mischievous as other incarnations of Puck, the sense of wonder and delight Mills brought to the role was new and interesting, and put a new spin on a classic character.

The technical aspects of Synetic’s Midsummer were simple, which allowed the actors  to really shine. What elements that were included were well done; from the costumes to the set to props, all designed by Anastasia Rurikov Simes. The set was comprised of streamers or ropes hanging down to signify the forest, or a red curtain as the backdrop for the theater where the players rehearsed. Most interestingly the set included a crescent moon, upon which Puck sat to fish and watch the mortals run about. There were also rope ladders, that Puck and Oberon clambered up and down to watch over the lovers, as well as to swing on for fun. The costumes were simple for the mortals, suits for the men and ball gowns (which tore away to reveal some racy undergarments for comic effect) for the ladies. For the fairies body and face paint was used more than actual costumes to convey their ethereal nature – although Titania did get to rock a Princess Leia – style metal bikini.

Silent theatre can in itself be a magical experience (no pun intended). Without words, you are forced to pay closer attention, and you see small details that you otherwise might have missed. Synetic’s Midsummer makes you forget that there was once a script, and sweeps you up in the experience of watching instead of just listening. It is a fully immersive experience, and one that everyone should experience. And no one does it better than Synetic Theater.