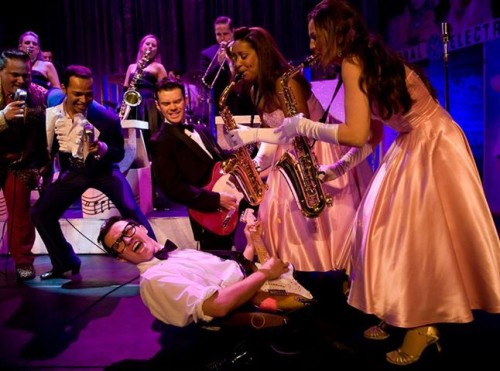 The cast of Buddy Holly. Photo courtesy of Wolf Trap.

For all our adulation of the Beatles it’s easy to forget that they stood on the shoulders of a scrawny, be-spectacled bean-pole of a dude from Lubbock, Texas by the name of Buddy Holly.  Holly made most of his recordings with a band he called the Crickets—a name which inspired the name for a certain immortal British band (and after John Lennon’s pun on the word “Beetle”).  Holly’s star shone brightly but briefly; his skills as a songwriter and interpreter were a national sensation, but after only a year and a half of stardom he was killed in a plane crash on February 3, 1959, along with two other early rock n’ roll pioneers, J. P. Richardson (“The Big Bopper”) and Ritchie Valens.

…should remain a fixture on summer stages like Wolf Trap for decades to come.

As any Buddy Holly fan-site will remind you, this date was memorialized as “the day the music died” in Don McLean’s famous anthem to the 60’s rock scene, “American Pie.”  But when Hollywood tried to cash in on McLean’s song and make Holly a movie legend, they botched it horribly (Gary Busey’s Oscar-nominated performance notwithstanding) with more errors to his biography than there were minutes to the film.  Some decades later it fell to Alan Janes, one of Holly’s biggest British fans (he had toured there only once, but memorably so) to set the record straight, and create a show that was as true to the man as to his music.  Among its early financial supporters was none other than ex-Beatle Paul McCartney, who shared Janes’ desire to set the record straight—and have a helluva good time doing it. 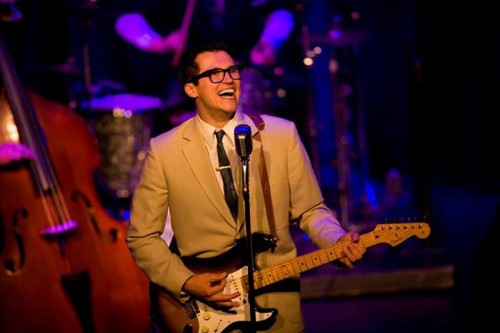 Buddy is billed as a “Jukebox Musical”—where the actors all double as musicians, performing the songs with note-by-note accuracy and acting the roles of the players between songs.  Casting depends as much on your music and dance expertise as on your acting chops.  This being a live show there’s no room for dubbing or body-doubles doing the fancy moves for ya; either you cut it or you’re out.  This heightens the audience’s expectations, because tribute bands are legion but it’s rare to find artists who can re-enact a famous artist’s songs and tell his/her story at the same time.

The touring production we saw at Wolf Trap this week marks a return-engagement for many in the cast, which meant that we were treated to performers who had the rare opportunity to grow into their roles even more.  Led by the cocky, charming Kurt Jenkins as Buddy Holly (who played the title role on the night I was there), he and the band ripped through a wide range of tunes, including a number of abortive ones that were quickly abandoned (Elvis Costello-style) for more up-beat material.

The show begins with the country-western scene of Buddy’s home town, Lubbock, and his battle of wills with local radio impresario Hipockets Duncan (the whip-smart and engaging Steve Gagliastro).   Lubbock, it seems, is no place for a rock n’ roll band so Duncan sends Buddy and his band to New Mexico, where shady producer Norman Petty and his wife, Vi, recognize the boy’s talents and ensure that they get a healthy share of the (monetary) glory for promoting him.  Eric Scott Anthony is every bit the shyster as Norman; and as his wife Vi, Carrie A. Johnson makes the most of a role that, especially in those days, often reduced her to making coffee—her incredible chops on the keyboards notwithstanding!

Kenneth Foy’s scenic design is a knock-out, right down to the perforated tiles of the sound-stage and recording studio.  But one of the highlights of the show, aided by Ken Billington’s intricate lighting design, is Foy’s evocation of the Apollo nightclub in Harlem, complete with a show-stopping rendition of the Isley Brother’s classic “Shout.”   As performed by the truly electric Lacretta Nicole (in the role of Miss Marlene Madison) this stand-out performance creates a stark contrast with the geeky white boy in big glasses waiting in the wings—folks like Holly, needless to say, were not usually considered stage-worthy there.  The Apollo was notorious for its tough audiences, and author Alan Janes has added some amusing dialogue and physical high-jinks to remind us just how out of place Buddy and the Crickets must have seemed; even today, it’s easy to see why it took a while for Harlem audiences to warm to them.

Women’s roles in rock musicals (especially about boy-bands) can be cloying, and the problem is compounded when actors are asked to double/triple in roles they were clearly not marked to play.  As a result, there are triumphs as well as outright duds here.  Noella Hernandez exudes charm and innocence as Buddy Holly’s bride, Maria Elena, and shows her assertiveness as well as her tender side.  Her wonderful performance is undercut, however, by Carrie Johnson’s awkward Mrs. Santiago (Maria Elena’s aunt).  Johnson, who is successful as Vi Petty, seems completely out of sorts and her over-thick, stereotyped “Latina” accent here was frankly an embarrassment.

The climax—an extended re-enactment of Buddy’s last show in Clear Lake, Iowa—is carefully crafted to give audiences one last taste of the hits that made him famous, supported by extended performances by The Big Bopper (played with relish and an astonishingly light foot by Ryan G. Dunkin) and a thrilling, pelvis-in-perpetual-motion version of “La Bamba” with Ryan Jagru as Ritchie Valens.  The song selection for Holly gives you a hint of the musical directions he was taking at the time, with hints of Latin rhythms and complex, pensive lyrics.  One gem I came away with was the realization that John Lennon’s “Dear Prudence” borrows a line from Holly’s “Raining in My Heart” as a quiet form of homage (“The sun is up/the sky is blue”).  When we lost Buddy we lost an artist whose ambitions were clearly taking him in new directions, well beyond his country roots, perhaps even beyond rock n’ roll, and into richer muslcal territory.

Buddy:  The Buddy Holly Story has been on tour, off and on, for decades and by rights should remain a fixture on summer stages like Wolf Trap for decades to come.  Old rockers, with their faded jeans and now-greying cockades, bring their grand-children to the show and give them a taste of their own wild days.  It pulls a few punches here and there, but that makes it all the more appropriate for young audiences.