Theatre Review: ‘Fiddler on the Roof’ at Spotlighters Theatre 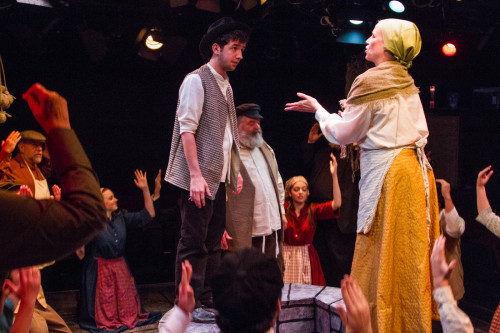 The cast of ‘Fiddler on the Roof’ at Spotlighters. Photo by Ken Stanek Photography.

Tevye, the central character in Fiddler on the Roof, must pull a milk cart by himself because his horse is lame.  In doing so, he slowly, pedantically drags it through Anatevka, a small village in Czarist Russia in 1905.  This struggle, this effort becomes a metaphor for Tevye, who seems to have the world’s weight on his shoulders, and in his world, he does.

At the brink of poverty, Tevye, a religious Jew who frequently refers to the “Good Book” and believes that God, for some reason, tries to give him a hard time.  He battles to feed, clothe and house his wife and five daughters.   His three oldest girls eschew deeply ingrained Jewish traditions to which he so desperately tries to cling.

Instead, they prefer to pursue lives of their own fueled by changing social mores.  He must also match wits with his sharp-tongued wife of 25 years Golde.    And on top of that, Tevye and his family as well as the other Jews in Anatevka face constant anti-Semitism and intimidation from Russia’s Czar.

‘Fiddler on the Roof’ is a must-see at the Spotlighters.

Fiddler on the Roof with its magnificent score opened in 1964 and became the longest running show on Broadway (over 3,000 performances) until it was eclipsed by Grease.  It captured 9 Tony Awards of the 10 categories nominated including Best Musical, score, book, direction and choreography.  Based on the Sholem Aleichem story Tevye and his Daughters, the show was crafted from music by Jerry Bock, lyrics by Sheldon Harnick, and book by Joseph Stein.

As has become a decades-long tradition in itself of mounting big shows, the intimate Spotlighters Theatre is ambitiously taking on this production of Fiddler on the Roof.  Once again, the creative team led by Artistic Director Fuzz Roark and the show’s Director Jillian Bauersfeld making her Spotlighters directorial debut, overcomes the test of mounting a grand Broadway musical on a small in-the-round stage and triumphs in every respect.

The meticulous attention to detail used in creating a level of authenticity to reflect what life would be like for Jews in a 1905 Russian village is mind-boggling. From the period costumes designed by Spotlighters veteran Laura Nicholson, to the intricate sets and props including three mezuzahs on doorways, this team put it together with total artistry and creativity.  The orchestration—a four-piece group under the direction of Michael Tan—provided superb background for the talented company.  (Distinguished among them is young violinist Sebastian Stefanovic, a junior at the Baltimore School for the Arts, who on occasion leaves the musical pit and ventures on stage to perform as the fiddler.)

The lighting by Fuzz Roark ably balanced the dramatic sequences with the music.  And the choreography that included a nifty Cossack dance, also led by Ms. Bauersfield, is excellent considering the challenges of performing on a tight stage.  With remarkable precision the 25 performers moved flawlessly on and off the stage to all the corners of the theater allowing the show to play big in a small venue.

As critical as these elements are in successfully sustaining a first-class production, the ensemble cast, led by Mike Galizia as Tevye, added the exclamation point.  Mr. Galizia, making his Spotlighters debut, is an opera-trained baritone whose body of work has been evident in Washington, D.C.-area theaters.

His powerful voice with the appropriate accent is on display from the outset as a stunning rendition of “Tradition” sets the tempo.  From there he excels in “If I Were a Rich Man,” “To Life” with Lazar Wolfe (Larry Levinson), “Tevye’s Monologue,” and “Sunrise Sunset” whom he shared with Golde (Amy Bell) and other members of the ensemble.  The tender, sentimental duet with Ms. Bell in “Do You Love Me?” is a proven audience pleaser, and they delivered.

Mr. Galizia’s commanding presence on stage is critical in the role of Tevye both in song and dialogue.  His timing is impeccable; his comedic lines, facial expressions and body language are right on target in demonstrating Tevye’s authoritative persona, sense of humor as well as his vulnerabilities.

Ms. Bell as Golde is also proficient in her role as Tevye’s sarcastic, strong-willed wife.  Her vocals are adequate, and her acting hits the mark.  Timing of lines is essential, and Ms. Bell is “the perfect match” in her dialogues with Mr. Galizia.

As the village matchmaker Yente, Suzanne Young also turns in a spirited, funny and at times, heart rendering performance.

The three oldest daughters who drive Tevye to near apoplexy, Tzeitel (Emily Biondi), Hodel (Alexa Canelos) and Chava (Julia Capizzi) all perform admirably.  Their love for each of their forbidden beaus is conveyed delicately and with emotion.   As a group, their number “Matchmaker” shines.  Particularly adept is Ms. Canelos’ rendition of “Far From the Home I Love” showcasing a crystal clear, lovely voice.

Vince Vuono as Motel, the poor tailor who winds up marrying Tzeitel despite the “agreement” Tevye had with the butcher Lazar Wolfe who was originally “matched” to marry Tzeitel, turns in a solid performance.  Also possessing a strong voice, the tenor shines in “Miracles of Miracles.”

Attractive Lucas Blake as Perchik, a radical who scoffs at traditions including being matched, wants to marry Hodel.  He acted proficiently but his vocals as evidenced in “Now I Have Everything” could use a little work.

John Aquila does a nice job as Fyedka whom Chava loves although he is not of the Jewish faith.  This relationship was all that Tevye could stand.

Also performing well were Jose Reyes Teneza as the Innkeeper, Bob Ahrens as the Rabbi, the aforementioned Larry Levinson as Lazar Wolfe, Mike Throne as the Constable, Matthew Feldman as Mendel, and Peggy Friedman as Beggar.  The remainder of the company added to the glow of this shining production.

The top-notch ensemble lead by sensational Mike Galizia, the stellar costumes, sets and staging did this award-winning musical proud.  Fiddler on the Roof is a must-see at the Spotlighters.

Running Time: Approximately two hours and 30 minutes with an intermission.