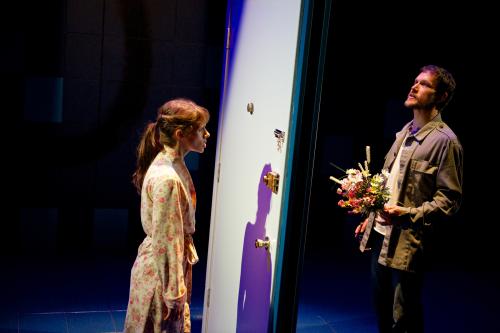 Diane Mair as Deborah and Alex Podulke as Jake. Photo by Seth Freeman.

The great American poet Theodore Roethke penned those lines in his famous poem, The Lost Son.  I couldn’t help but remember the phrasing after experiencing Jane Martin’s latest play—and masterpiece—H2O.  Yes, H2O is a masterpiece and will surely be performed, difficult as it is, throughout the Christian/Hollywood world.

For this two-person love quartet—yes, quartet—among and between Deborah and Jake and Jesus and Nothingness (or might I say Satan, though that would be allowing the Lord to name his own opponent) pits the certainty of convictions against the meaninglessness of doubt.  The awesome power of this play lies in its ferocious commitment to balance between the lost and the found, the saved and the unsaveable, the spiritful and the fleshy.  We might love one of these characters more than the other, but both make their case up to and beyond the bitter end. 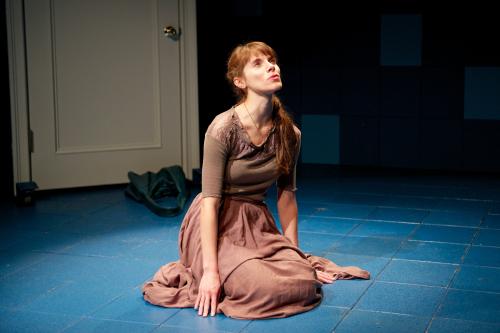 Martin’s H2O embodies America and its Culture War in the 21st century.  In fact, H2O is this nation’s Culture War writ large, or should I say small, lying embedded in its two-person sadomasochistic love triage.  Who will live and who will die?  And can one survive without the other?

We first meet Deborah and Jake, and both speak directly to us.

Deborah is a born again Christian, or specifically a renewalist or Charismatic Christian.  She speaks directly to Jesus, and he has told her to pursue acting, in New York City of all places.  Deborah does not pursue just any acting, however; she pursues Shakespeare because he alone has the ability to transform the grossest of human conditions into the beauty of poetry.

Jake is the Dawnwalker, or rather the man who walked off the street and into celebrity fame and riches by starring as the Dawnwalker in three multi-million dollar films.  He now finds himself capable of buying anything or anyone he wants.  The only problem is: one needs a reason to buy something and, after a few short months spending freely on women and liquor, he finds himself staring into a black hole where suicide by knife will at least leave him feeling something as the lights go out.

The situation is indeed a strange one.  Jake decides he wants to play Shakespeare’s Hamlet on Broadway, and he has enough money to grant himself that wish.  He sees it as a way of challenging his other great wish: death.  After all, Hamlet starts the play with suicidal ideations.

Jake wants to find his Ophelia.  Deborah answers his audition notice.  When she arrives she interrupts a suicide attempt.  She visits him at the hospital.  After some ferocious negotiations, Jake casts her as Ophelia, but she rejects the offer, even though it is what her four-year stint in New York has been yearning for.  Why?  Deborah never actually auditioned for him and thus did not earn it.  So he auditions her and goes ballistic with rage, and she flees him for safety’s sake.  And the story just keeps on rolling.

‘H2O’ is a masterpiece

As Martin has written Deborah and as Diane Mair plays her, one will not find an ounce of sarcasm or buffoonery or insanity about her.  No, from the get-go, as Ms. Mair’s Deborah gazes at the audience, if you look into her eyes you will know that she is possessed, filled with a voice, or a spirit, or perhaps three Venti cups of Starbuck’s coffee.  And you might easily take her for mad, but you would be mistaken.  Both Mair and Martin keep this possessed young woman sensible and driven even if all together otherworldly. 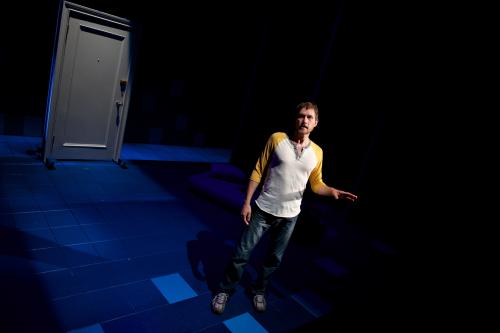 Diane Mair gives the performance of a lifetime, even though I am sure she will play other demanding and miraculous roles in the years to come.  Her petite body and gentle soul pack a wallop as she roughhouses with her play partner Alex Podulke’s Jake.

Mr. Podulke’s performance is no less commanding and his part no less well written. In fact, the only gnawing question I had watching the play swirled around the character’s eloquence.  Given Jake’s background, one has to wonder how he—not Martin—acquired such a fine vocabulary and wit.

It is not Jake’s wit, however, that commands the stage.  One cannot but be struck and attracted by his profound loneliness and destructive rage.  Like the black hole into which Jake stares, Deborah cannot help but return again and again to this soul in desperate need of salvation.

Director Jon Jory has choreographed this 90-minute duet with precision. Though taking place in dozens of scenes over many, many months, the action never stops as tech and costume crews take to the stage to alter set and image right before our eyes, even as Deborah or Jake continue the conversation with the audience.  At one point we listen to Deborah as the make-up artist blackens her eye and scars her face, only to watch that same artist remove the evidence before the next scene which takes place after the healing.

Fight director Aaron Anderson must be given special praise for his choreography of the fights.  Within the theatre’s intimate space their shocking believability made me flinch.

There is nothing sentimental about H2O, nothing clever or cute; neither is there anything remotely resembling a viable solution to a clash so polarized and uncompromising.  Yet, the inevitability of Deborah and Jake’s attraction is as real and visceral as it is necessary. When the curtain comes down, we can’t help but wish that somehow, perhaps even on some other planet, these two purists of opposites had somehow found a way to work it out.