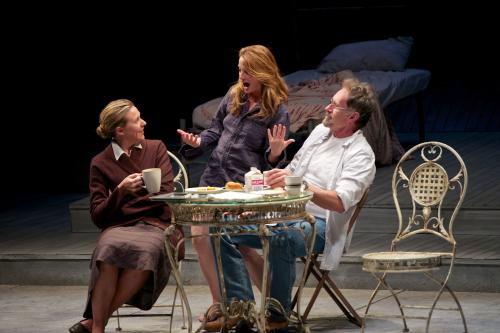 Sam Shepard’s Heartless is perhaps his best–and definitely his most mature–play, which is not to say it is his most accessible.  For it is not.  In fact, though the characters resound with a mysterious authenticity—a deft mix of down-home domesticity and Hollywood’s larger-than-life eccentricity—the story is as inexplicable as it is captivating, as long as one does not demand, or hope for, a world of rational connections.

…an experience of wonder that is well worth its 90 plus minutes.

Although the four most interesting and thought-provoking characters  are the women, the lead in this mysterious, Jungian landscape is Roscoe, played by Michael Cullen like a man lost on a desert island with four fascinating and attractive women to keep him company, which is of course the perfect way to play this 65-year-old college professor and Don Quixote expert.  In a world one step removed from a land of archetypes, Roscoe and his happy dog cannot make heads or tails of this feminine-dominated villa overlooking the sea. 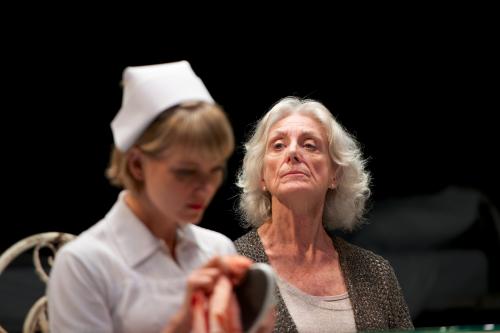 Roscoe has been brought to this island in the storm—his wife of x-years having recently left him or kicked him out of the house, thus leaving him disoriented and homeless—by Sally, played on the night I watched the show by understudy Margot White.  When Sally first appears to us, she is naked from the waist up; she has what looks like a huge zipper descending from neck to belly button—the scar she received a decade or more ago from heart surgery.  We come to find that Sally should have died, if not for the fact that a young girl her age was murdered, save for her heart, which was transported cross country into Sally’s waiting chest.

Ms. Margot presence is stunning, her face radiant, and her understudy performance of Sally scintillating.  She captures Sally’s devil-may-care attitude all the while belying a far more desperate undertow.  As we come to discover, Sally’s heart is filled with a need for love and acceptance.

Sally is Lucy’s younger sister.  Lucy, played with dry wit and domestic determination by Cassie Beck, marvelously grounds Heartlessin the everyday affairs of normal life.  Whenever we see Lucy, she seems to be carrying a tray of food or medicine, as she cares for the family’s matriarch Mable.  Of course, in keeping with the play’s “what you see is not what you get” perspective, we come to find out that Lucy cannot live on normalcy alone.

Mable, played by Kathleen Butler, lords over this seemingly island kingdom from her wheelchair.  Butler’s performance reverberates with ironic bitterness, not so much biting as it is pricking.  Her scenes with Roscoe were particularly amusing, as Roscoe squirmed ever so slightly beneath her always cheerful slices.  On the other hand, her scenes with her mute nurse Liz were not so amusing, although equally depicting the sadomasochism of everyday life. 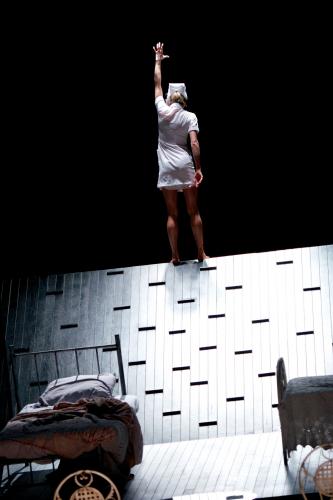 With Liz, however, the perhaps nurse who more than any character acts as a conduit into the play’s mysterious otherworldliness, we have a character as perplexing and mysterious as any Shepard has created.  Played with coy seductiveness, and at times outright “let’s have sex now” glances from her perch atop, and within, her white healthcare professional outfit, Susannah Hoffman’s Liz embodies the Hollywood femme fatale.  Yet, this femme fatale, who at one point spends ten minutes cleaning blood off her feet, is more doppelganger than sex-murderer, more spirit-of-murdered-childhood than flesh-and-blood temptress, and she brings with her a beautiful tongue-in-cheek attitude.

Ed Herendeen’s direction is superb, as he grounds the story in authentic human interactions, without which the audience could easily have wandered off into a dozen desert islands of their own.  He also brings Shepard’s exotic mysticism to the stage with well-crafted, and articulate moments of totally tangential happenings.

Herendeen’s design team also did a fantastic job, particularly set designer Luciana Stecconi.  Not only is the compact bedroom and patio clean and delicate, but the nearly invisible deck that allowed matriarch Mable to rise above us and peer out is exquisite.  Sound design by Eric Shimelonis expresses perfectly the relentless, and menacing undertow that Heartless brings in with the tide.

Heartless is not for everyone: its otherworldliness will no doubt confuse anyone wanting a reasonable explanation for human events.  Additionally, if you are looking for a story with a lot of action, Heartless will not satisfy you: its Jungian dreamscape and finely crafted characters will give you an experience of wonder that is well worth its 90 plus minutes.

Rather, in Heartless you will watch a lost man in crisis—seduced, toyed with, mocked, filmed, and titillatingly tortured by four women who are equally lost, but financially secure enough not to care.  You will be left to ponder the possibilities, to dream about the mysterious relationships, but you must resist any temptation to solve its puzzle, for it is a puzzle rooted in our mythic relationship with others, and in our impossibly ill-defined relationship with ourselves.

Running Time: 100 minutes with an intermission.

Heartless plays at the Frank Center Theatre through July 28.  For tickets and more information click here.